Rally Against Veterans' Flag Convoy and in Support of Hampshire College.

As noted in the previous post, Hampshire College's decision to resume flying the American flag in the wake of the protest by a veterans' group led the organizers to cancel the  second demonstration scheduled for a week later. However, another group, the "American Flag and Thin Blue Line Convoy," decided to go ahead with their showing of the flag along a route running from UMass via Amherst College to Hampshire. In the meantime, a group of leftist Pioneer Valley activists hurriedly organized a counter-demonstration on the Amherst Common.


Raise our struggle! (We have markers)

Both events were small. The Convoy claimed just over 200 participants. The counter-demonstration was even smaller. When I arrived fewer than 10 minutes before the announced start time of 10:00, there were only three people there, just starting to make signs. "We have magic markers if you want to help," one of them told me ("and glitter," another helpfully added). Even when the event got going, between 10:15 and 10:30, there were only between about two and three dozen people present. By the end, the total was over 100, and perhaps around 150 by my count--still a far cry from the 1500 that the organizers claimed for their veterans' protest at Hampshire a week earlier. 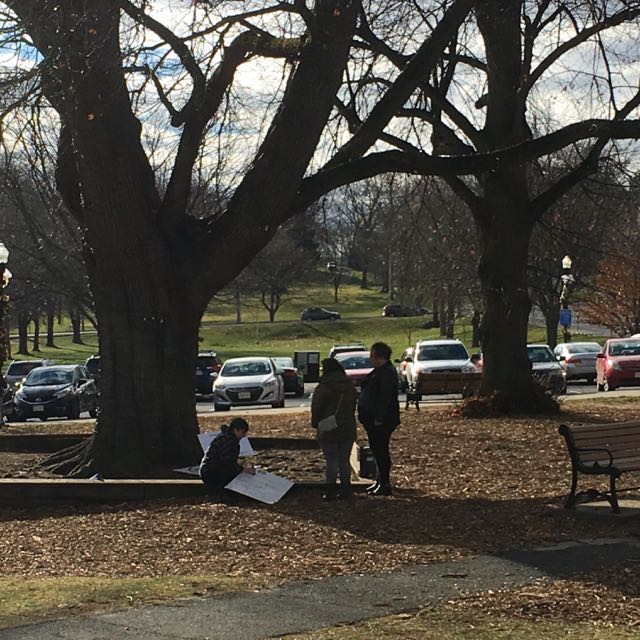 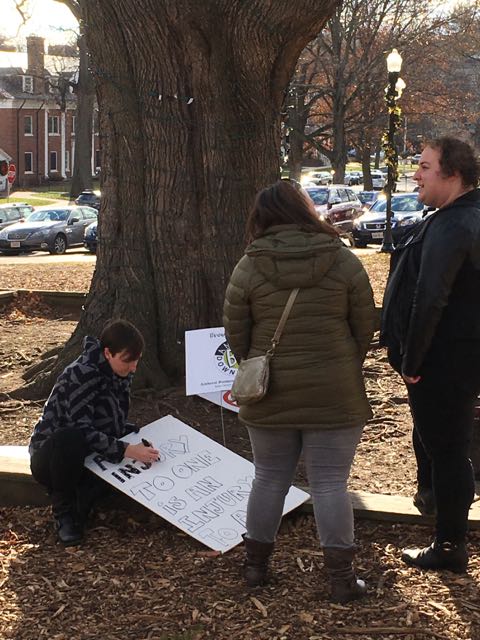 Whereas the veterans' protest was sharply focused on a single issue and a  clear outcome --"Raise the Flag!"--the program of the present event, called "Raise Our Struggle," might best be called eclectic: a counter-demonstration against the convoy, combined with wide-ranging demands for social justice and denunciation of the bigotry and racism associated with the election campaign of Donald Trump, as well as a call for "hands off Hampshire College," in response to the abuse that the latter was suffering for its flag policy.


A rally and gathering in defense of our plural and diverse communities in Amherst and beyond.

In Amherst and communities across Western Massachusetts, some of us are proud of our country and the flag, and others are not, but all of us recognize that Hampshire College has been subject to an unprecedented attack on their community's autonomy and character as a progressive and critical space. Reactionary nationalist forces have invaded their community with direct racist and xenophobic threats to impose a political vision that erases the experiences, voices, and history of immigrants, people of color, women, LGBTQ communities, youth, Muslims, indigenous people, Jews, other marginalized and oppressed communities, and the working class. Elected officials and politicians, from local Democrats to Donald Trump have spurred on and defended this assault, more concerned about the American flag than the proliferation of hate crimes and open bigotry in our communities.

This is not about any symbol. This is about human beings. The assault will not stop at Hampshire College. The same forces want to lay siege to communities of color, college campuses, and progressive institutions of the marginalized and the working class. They fly the thin blue line and celebrate the police, not for their own safety or peace, but to shield police and the state from scrutiny, from checks on the violence daily inflicted on black, brown, and working class neighborhoods. Forces of reaction wish to wrench apart our communities , not in the name of freedom, liberty, or patriotism, but dominance, blind authority, vulgar power, and profit.

We humbly recognize that we are on stolen land, and we need to respond with stewardship in solidarity with indigenous peoples, not to reclaim territory for nationalism and imperialism. We must do our part in Amherst, but free our hearts, minds, and bodies to support the struggles of frontline communities across this country and the world. We will not forget our past, our history, our struggles for liberation and freedom.

An Injury to one is an injury to all!

The first remarks by a Springfield activist addressed the theme of social justice in the age of Trump. 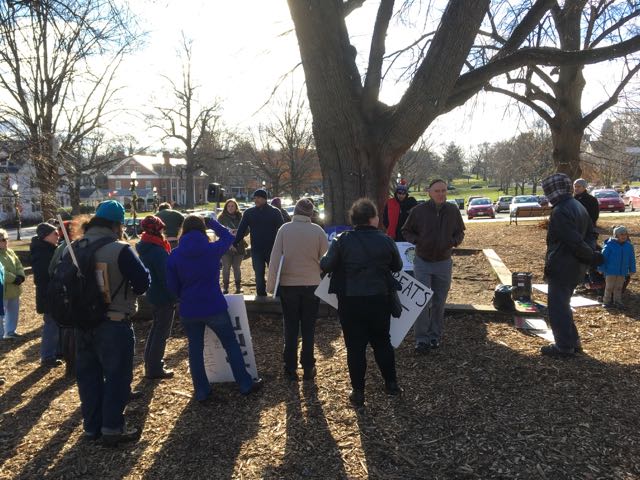 "What do we want? Free speech!"

About 20 minutes later, demonstrators took up positions along the sidewalk and in the crosswalk at the intersection of Pleasant and Spring Streets as the convoy approached. Blocking the street (a violation of the law) in order to stop the convoy, they shouted, "What do we want? Free speech!" (Other chants included: "No Trump, no KKK, no fascist USA.")


A sheriff's car accompanying the convoy (a service the convoy organizers paid for) halted and prudently allowed the protest to go on for a few moments. Frustrated, the convoy participants made u-turns and found an alternate route. A moment later, an Amherst police vehicle arrived. The officer advised the demonstrators that they were not allowed to block a public way, and they returned to the Common.

Jubilantly proclaiming that they were "badass" for having briefly interrupted the progress of convoy, they continued with their program.

School Committee member Vira Douangmany Cage, the only Amherst elected official to participate (though in a private capacity), spoke of social justice, denounced the outside politicians who had taken part at the Hampshire College protest last week, and criticized Amherst's government for not intervening. 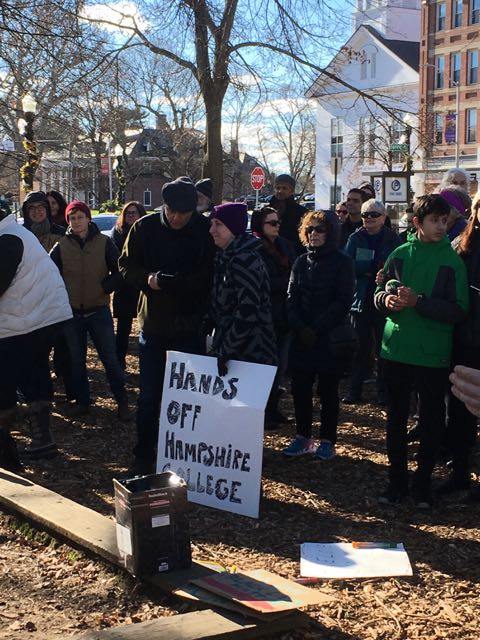 Hampshire College professor Uditi Sen (my colleague in history) defended the institution's decision to remove the flag, offering what might be characterized as the predominant view among the faculty and administration.


Few outside the academy may share this view (or even understand the argument that she was trying to make), and that is their right--but the nature of that disagreement makes all the difference.

Mount Holyoke student and conservative activist Kassy Dillon covered the convoy and the demonstration on the Common on social media, mocking the College and the protesters. That, of course, is her right, as well. Part of her coverage included live commentary of the rally via Periscope. 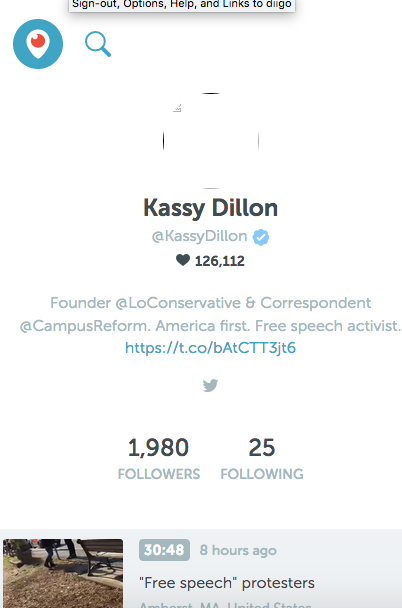 Unfortunately, some of the respondents to the feed chose to offer particularly hateful responses (for which, it should be stressed, one cannot hold Ms. Dillon responsible). They ranged from the childish to the racist and full-blown neo-Nazi. 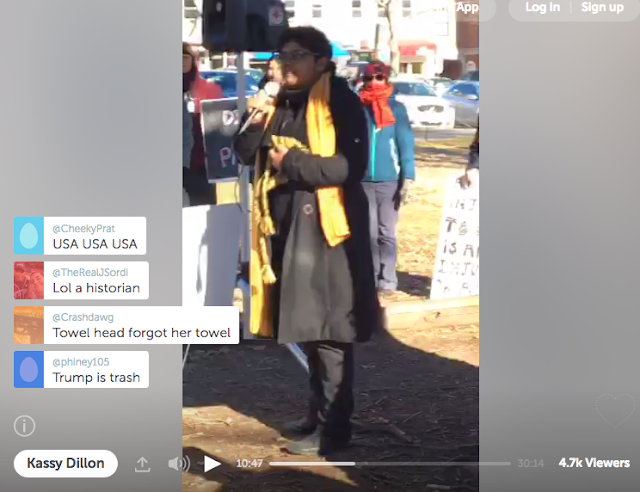 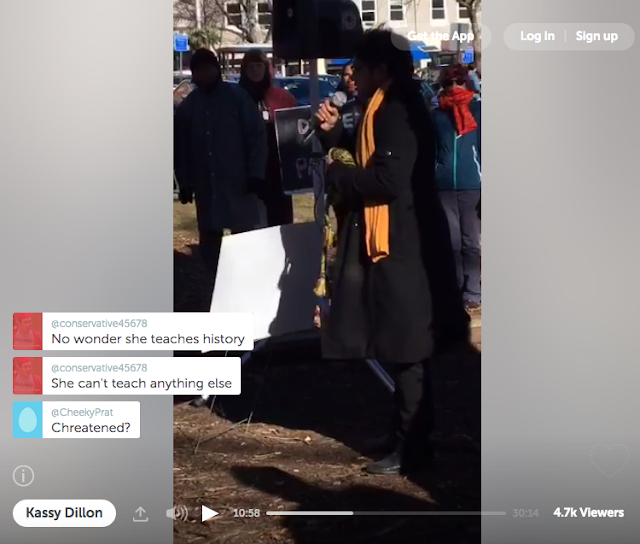 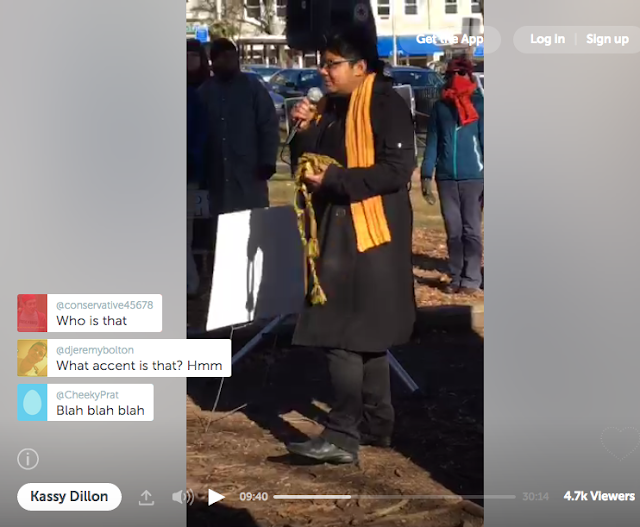 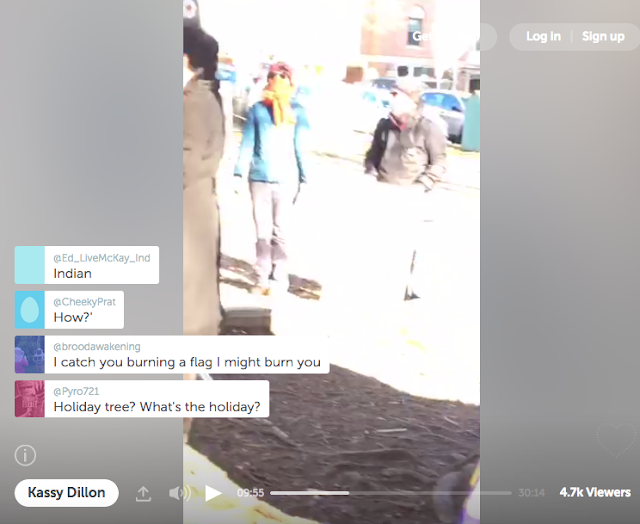 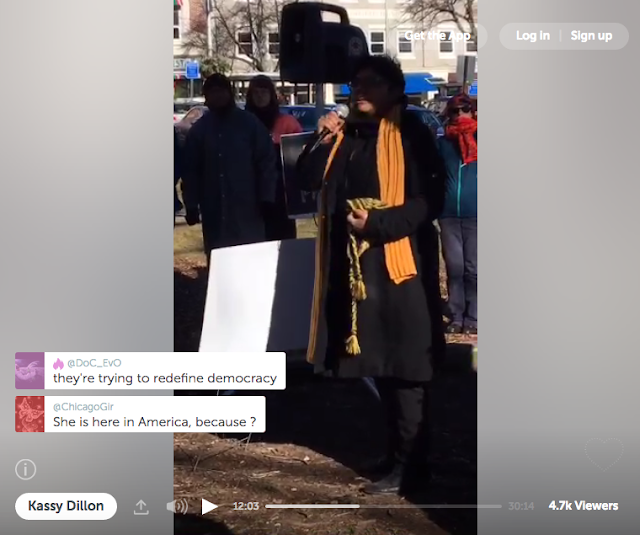 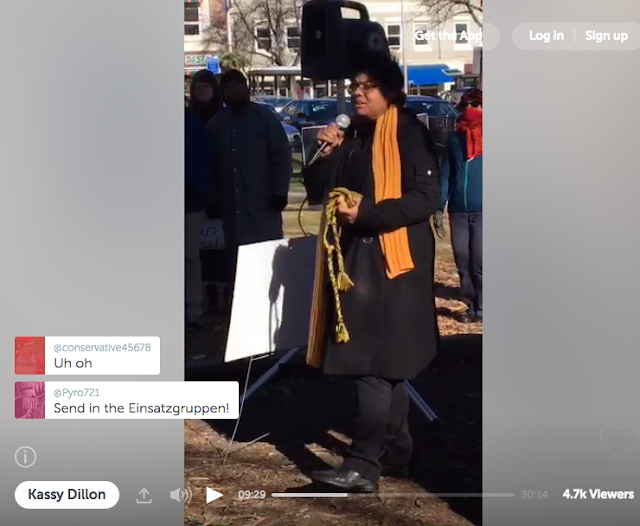 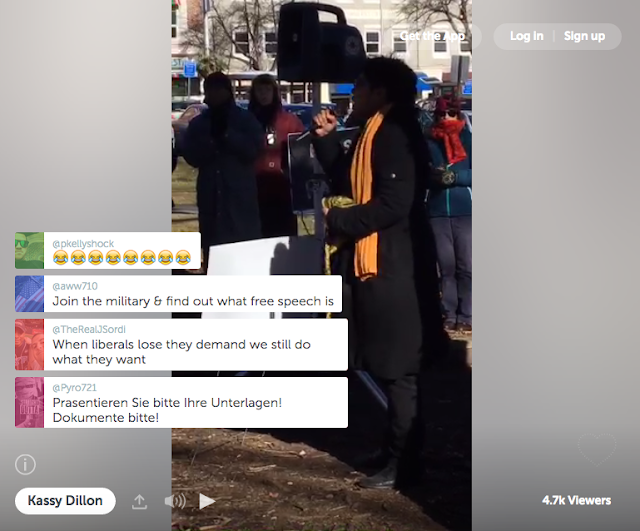 It was a perfect illustration of the toxic political landscape at the intersection of internet journalism and social media. Often it's not even so much the actual reports as the unmoderated responses and "talkbacks" that are the problem. Here, the problem is all too evident.

In contrast to the brief and bland report on WLLP Channel 22, the Springfield Republican's Mary Serreze (@maryserreze) did a notably thorough job of covering the event from the standpoint of both parties.