The commemoration of the centennial of the Armenian Genocide on the Town Common last week was an even greater success than we could have hoped for: circa 50-60 people were present, which is an unusually large number for any such ceremonial event, even compared with our well-attended Black History Month gathering in February.

(Amherst Media recorded the proceedings, which should be posted soon.)


It was a moving event.

Town Meeting and League of Women Voters member Adrienne Megerdichian Terrizzi opened the ceremony with music and an explanation of Armenian history and the nature and lasting trauma of the genocide. 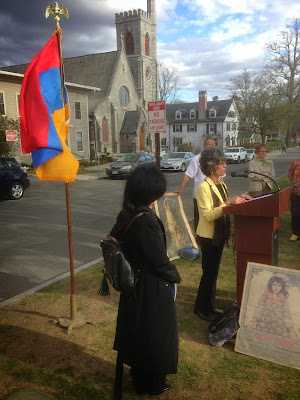 Amherst Select Board Chair Alisa Brewer welcomed guests on behalf of the Town, emphasizing the need for remembering and learning from history.

Our Massachusetts State Representative Ellen Story spoke of the struggles that she had experienced in the course of attempting to get the legislature to recognize this crime and make it part of our educational curriculum.

Amherst Human Rights Commission Chair Greg Bascom described his efforts to educate himself about the genocide and highlighted its relation to our commitment to the principles embodied in the Universal Declaration of Human Rights (whose anniversary we commemorate every December).

I read the Select Board Proclamation:

Whereas, from 1915 to 1923, the government of the Ottoman Empire systematically planned and carried out the murders of an estimated 1.5 million Armenians living in Asia Minor and historic West Armenia, and

Whereas, by 1923, this mass extermination and the accompanying atrocities had resulted in the virtual elimination of the Armenian population and culture in historic Asia Minor and West Armenia, which has become known as the Armenian Genocide, and

Whereas, the first mass murders began on the night of April 24, 1915, when the Turkish government arrested more than 250 Armenian community leaders in Constantinople, the Ottoman Empire’s capital city, and

Whereas, most of the prominent educators, clergy, writers, lawyers, intellectuals, and other public figures of the Armenian community were summarily executed, and

Whereas, most of the adult males were either conscripted into the Turkish army to fight on the side of the country that was killing their people or were murdered on the spot, and

Whereas, large numbers of Armenian old men, women, and children, including babies in arms were either killed or forcibly deported to the Syrian desert, during which deportation many died either en route, at the hands of government-aligned gangs, or from dehydration and starvation in the desert, and

Whereas, in May 1915, the Allied Powers of France, Great Britain, and Russia issued a joint statement charging the government in Constantinople with committing crimes ‘‘against humanity and civilization,” and

Whereas, Raphael Lemkin, the initial drafter of the United Nations Convention on the Prevention and Punishment of the Crime of Genocide and the originator of the term “genocide,” recognized the Armenian Genocide as the type of crime the United Nations should prevent through the establishment of international standards, and

Whereas, historians cite the Armenian Genocide as a forerunner of later genocidal massacres, including the Holocaust, the Cambodian Killing Fields, Bosnia, Rwanda, and Darfur, now therefore be it

Resolved: we, the Select Board of the Town of Amherst do hereby urge all residents to mark this occasion and to participate fittingly in its observance by honoring the memories of the victims and the courage and resilience of the survivors,

Beginning with a ceremony to be held in front of Town Hall on April 30, 2015

And further, by taking to heart the lessons of this tragedy as we commit ourselves to upholding the principles of the Universal Declaration of Human Rights, throughout this centennial year and beyond.

Finally, be it resolved that the Town of Amherst be directed to send a copy of this resolution to Governor Charlie Baker, State Senators Edward Markey and Elizabeth Warren. U.S. Representative James McGovern, President Barack Obama, the Armenian National Committee of America and the Armenian Assembly of America.

My Hampshire College colleague Marian Mesrobian MacCurdy then read a poem by a murdered Armenian poet. 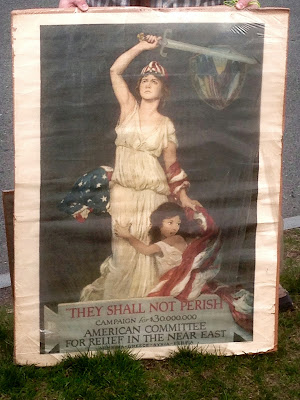 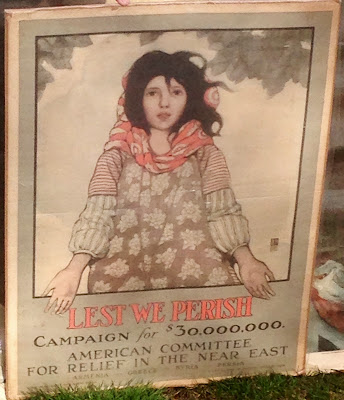 Following the ceremony, Marian gave a reading from her new book--Sacred Justice: The Voices and Legacy of the Armenian Operation Nemesis-- (Transaction Books, 2015)--at Amherst Books. It is a blend of historical research and personal reflection. As the announcement described it:


This work combines narrative, memoir, and primary sources to tell the story of a group of Armenian men who undertook a covert operation created to assassinate the Turkish architects of the genocide.

In one of the fascinating coincidences of history, a Polish Jewish anarchist, Sholem Schwarzbard, stood trial for assassinating the Ukrainian leader Symon Petliura--accused of allowing pogroms in the chaos of the Revolution following World War I--at the same time as the Armenian Soghomon Tehlirian stood trial for assassinating the architect of the Armenian Genocide, Talaat Pasha. Both were acquitted. (After Word War II, Jewish "avengers" carried out operations similar to those of the Armenian "Nemesis.")

My Hampshire College colleague Aaron Berman introduced the event by explaining the historical background of the Armenian Genocide in the context of Ottoman history. 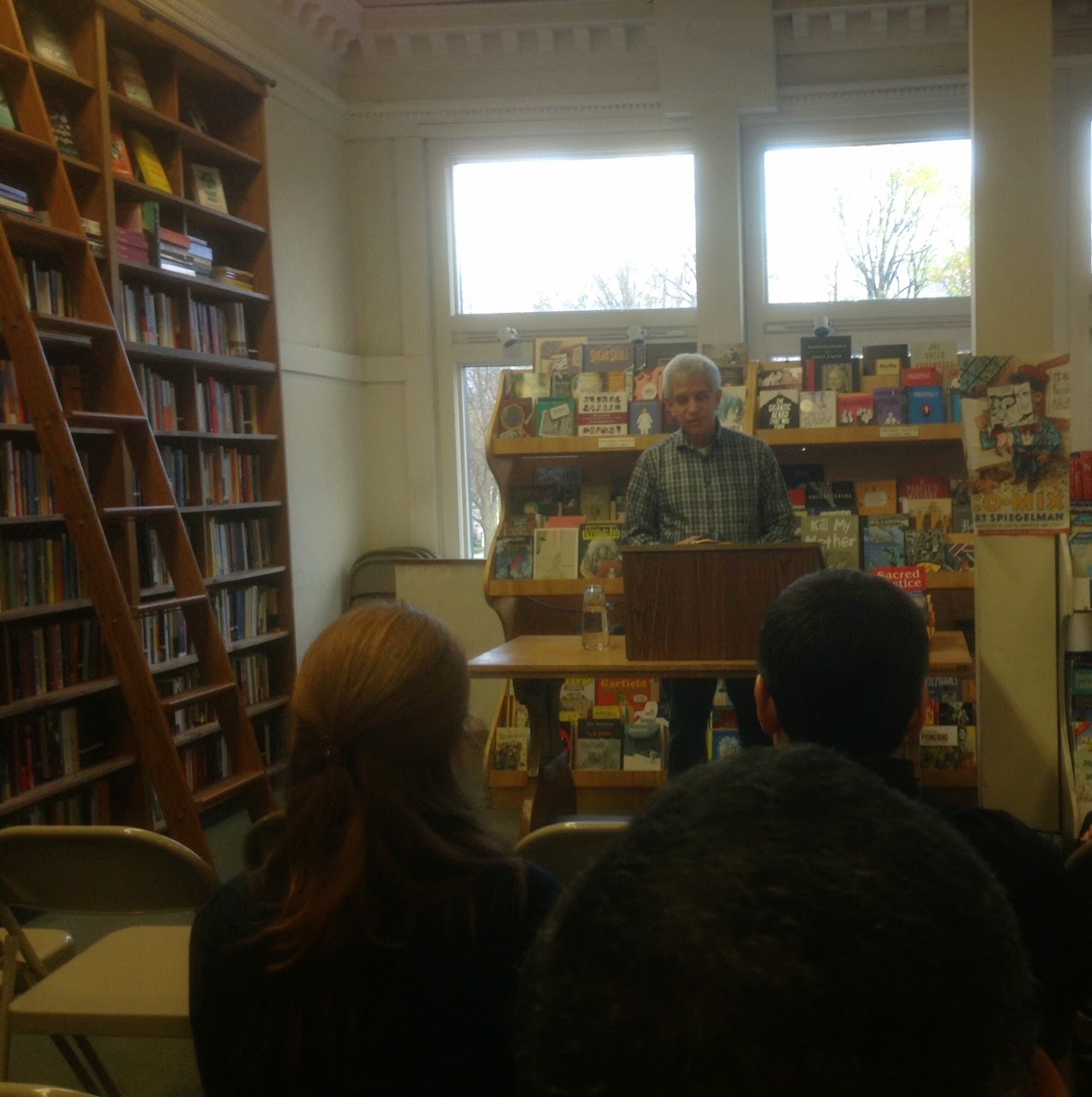 Adrienne Megerdichian Terrizi introduced Marian, who then read from the work and answered questions. 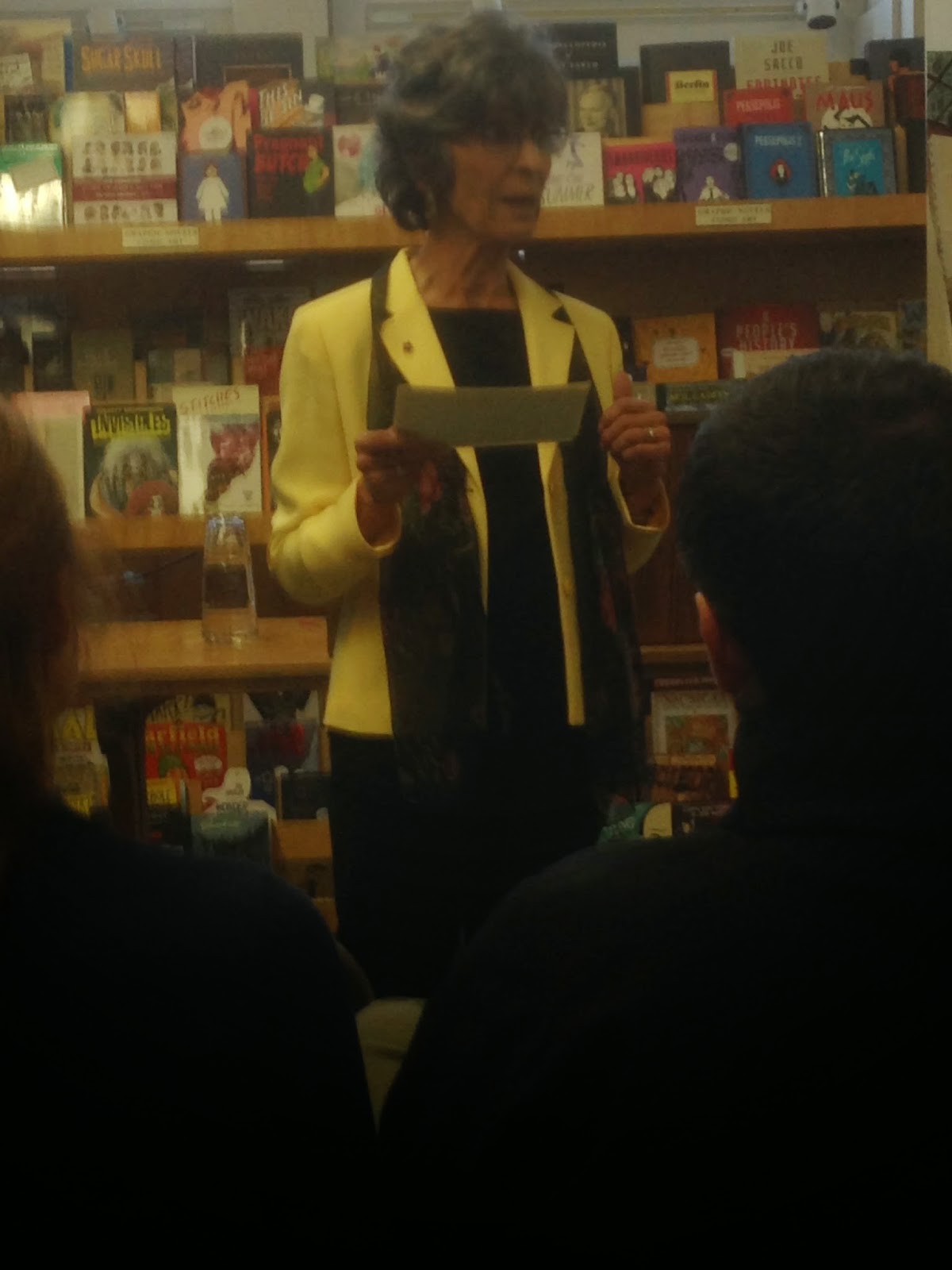 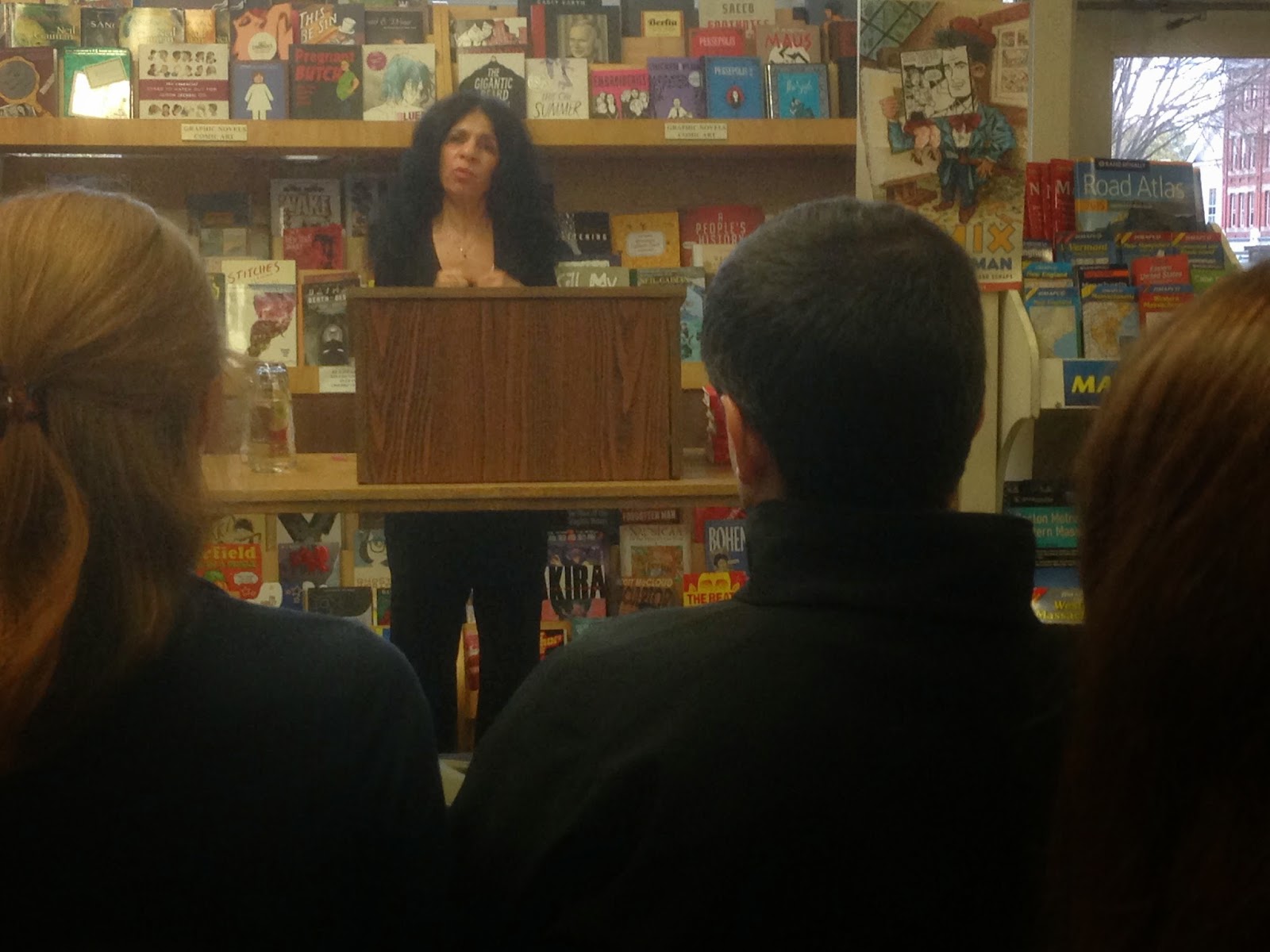 One of the most intriguing aspects of Marian's book is that she did not discover her grandfather's role in the revenge operation until after his death when she came across a cache of papers presenting a very different portrait of the mild-mannered patriarch that she had known. The book is thus a story of detective work and personal exploration as well as historical analysis. Any one of those traits would make a compelling case for placing it on anyone's "to be read next" list.

Here, to whet your appetite, is an excerpt (via Armenian Weekly):


For the first six years of my life, my parents, brother and I lived in my maternal grandparents’ house in Syracuse, N.Y. The six of us were crammed into a small early 20th-century frame house, with a front porch and tiny back study that served as my bedroom; an enticingly flat roof outside its window overlooked our grape arbor, fruit trees, and strawberry patch where my grandmother caught the thieving bunny she spanked and sent on its way. Our home welcomed many a visiting dignitary. As a small child I sat on the lap of family friend, Hamo Paraghamian, a huge man with a heart to match. My small hands carried a bowl of yogurt and garlic for General Dro sitting in the blue chair in the corner of our living room, who thanked me by intoning in his gruff voice, “This is food for the gods.”

Aaron Sachaklian (in Armenian, Aharon), my grandfather, spent most of his days in the red leather chair near the wooden radio he listened to every day, silently smoking his Camels with shaking fingers, perhaps from undiagnosed Parkinson’s that would, years later, steal my mother’s smile and cause her shuffling gait. But when I was three, four, five, this quiet man who wore a three-piece suit nearly every day of his life, who had private sessions with visiting community leaders and battle heroes, bounced me on his foreleg, carried me through the doorways on his shoulders like a queen, and took me outside at dusk to survey the peach, pear, and apple trees beyond our back door. When my grandmother Eliza and I made our weekly trip to Abajian Cleaners three blocks down on South Avenue, I was the one to carry his wool coat, hugging it to my chest, saying, “I love my medz-hairig [grandfather]. I wish he would live forever.”

My grandfather lived to 84, the last few years in mental and visual darkness, his eyesight failing, his prodigious brain’s neurons deadened from a series of strokes. Thinking me his wife as a young woman, he called me Eliza, took my hand in his, stroked it, and held it to his cheek. No one in our family knew until close to 25 years after his death that my grandfather was the bursar and logistical leader of the covert operation—known as “Operation Nemesis”—to assassinate the Ottoman-Turkish architects of the Armenian Genocide.

a recent post serves as a backgrounder on the genocide, its commemoration in Massachusetts, and some controversies over definitions and political implications