Christmas Decorating With the Nazis: From the War Diary of a German Girl

This is a document that my father acquired during his service with the US Occupation Government in Germany after World War II: confiscated, or just found in his office or quarters—I don’t know. It is described as a “war diary” for a young girl. Normally speaking, a war diary (Kriegstagebuch) is an official German record of a military unit or department, or occasionally, a private record kept by a combatant. The extension of this term—rather than, say, scrapbook—to a gift made for a child is indicative of the culture of militarism and indoctrination under the Third Reich. (more background at the bottom of the page)

The Christmas entries are particularly instructive.


Weihnachten with the Wehrmacht

In one of the most famous military broadcasts of the War, German radio shared transmissions from the Arctic Circle and Stalingrad to Africa as soldiers sang "Silent Night."


Of course the tendency to seize upon Christmas as a respite from combat was not unique to Germany. 101st Airborne veteran Art Schmitz recalled being surrounded by the Germans at Bastogne in 1944. Hearing "Radio Berlin doing a request broadcast: German civilians asking for Christmas carols to be played for their soldiers serving in Narvik, Norway; Italy; or Novosibirsk, Russia," the Americans decided to sing their own Christmas carols. "There was 'The First Noel,' 'O Little Town of Bethlehem' and others before we began 'Angels We Have Heard on High.' What we heard was the sound of angels of death overhead." A Nazi air raid began and the singing ceased, but the memory remained.

The diary pages for the two days of Christmas (celebrated for two days in Germany) epitomize the blending of the military-propagandistic and bourgeois-sentimental.

The sketch of the evergreen branch with a candle (a tree-decorating tradition maintained up to the present in some circles, though not without risk) is the only original art work in the book.

Nazism was ideologically anti-Christian, but it readily availed itself of Christian imagery and symbols not only because they were familiar, but also because they were particularly well suited to convey the fascist message of "palingenetic" ultranationalism, or the urgent need for national regeneration: the propaganda film "Triumph of the Will" begins, after all, by speaking of Germany's "crucifixion" by the Versailles Treaty and "rebirth" after the advent of Hitler.

Christmas was in many ways the ideal holiday for the Nazis: a convenient means to affirm their connection with mainstream society (for even their most barbarous acts were committed in the name of decency and middle class values) as well as to impart their own inflection to it. Christmas was of course common to both Catholic and Protestant Germans, but the latter connection was most fruitful, for Lutheranism was associated with the national identity and heritage: the revolt against Rome; the translation of the Bible, which laid the foundations for the modern German language; and (at least according to popular tradition) even the introduction of the Christmas tree. Further, the natural-seasonal aspects of the holiday, which coincided with the winter solstice, were multivalent, allowing for easy identification with either a Christian or a Nordic-pagan message (or some combination of both), as the need dictated.

Finally, the holiday, with its themes of both domesticity and light versus darkness, could incorporate varying ideological messages about the relation between battle front and home front, depending on the course of the war: from the early expectations of peace and national renewal, to later, increasingly bitter denunciations of the barbarous enemy--whether the advance of the Red Army or the allied air campaigns against German cities--as a motivation to fight for the preservation of the innocents at home.

Thus, the page facing the photo of the soldier trimming the Christmas tree was devoted to a an address by Hitler.


The Nazis as the Peace Party? 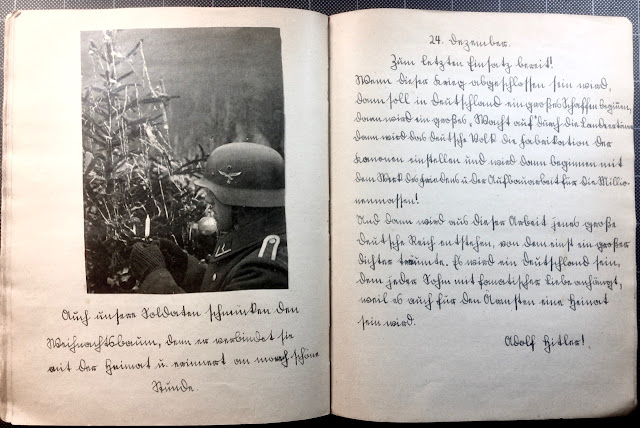 Prepared for the Final Call!

When this war will have ended, then there will begin in Germany a great process of creation, then a great "Awaken!" will resound throughout the land. Then the German people will cease the manufacture of cannons and begin with the work of peace and task of reconstruction for the masses in their millions!

And then from this labor will arise that great German empire of which a great poet once dreamt.  It will be a Germany to which every son is attached with fanatical love, because it will be a home even for the poorest.

If this strikes us as preposterous as well as utopian, it is because we are so detached from the perceived reality in that time and place. Today we associate Hitler and Nazism primarily with war, but we need to recall that this was not always the case, at least domestically. Another book that my father acquired was a propaganda album of cigarette cards issued to commemorate the first year of the new regime (1934), which it praised as "The State of Labor and Peace." 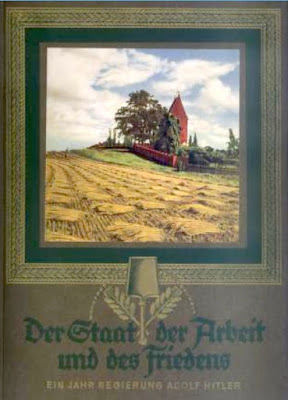 Indeed, as Ian Kershaw so clearly demonstrated in his modern classic, The Hitler Myth, Hitler succeeded for so long precisely because he was credited not only with achieving domestic recovery but also securing--without war--the consensus international goals of the military and geographic revision of the Versailles Treaty. This presumed evidence of his genius as a leader reinforced his standing among the loyal and cut the ground out from under the would-be critics. When war finally broke out in 1939, the German people, fully aware of what had happened in 1914, were more sober and anxious than enthusiastic, but the relatively easy victories in Poland and then in the west following the end of the "Phony War" in 1940 merely reinforced Hitler's reputation for wisdom and infallibility.

What the mother writing this diary--and the rest of the public--did not know was that peace was in fact further away than ever: on 18 December 1940, Hitler had ordered the military to prepare for the invasion of the Soviet Union, even if the war against Britain was not brought to a conclusion.


From Peace Party to Pagan Turn

Thus, when Himmler greeted the SS and their families in the 1943-44 volume of the holiday annual Weihe Nacht (a deliberately archaic spelling of Christmas, connoting pagan origins), it was in a very different tone:


Women and mothers! Men of the SS and Police!

Implacably harsh is the enemy power, against which we have to defend and augment the Reich as the legacy of our ancestors and obligation for our children. Once again the season of the solstice and Christmas summons us to the gathering of clans [a term with a pagan-racial tinge] and families. Once again the task in the longest night of the year is to yearn for the victory of the sun with the faithful trust of our ancestors. May this deep faith in the victory of the light characterize us more deeply than ever today, when we in the privacy of the family or comrades kindle our lights. The lights on the green boughs will, spanning the distances that separate comrades in the front lines and the women and children at home, form bridges between hearts.
You mothers and women truly stand, as in all the great hours of destiny of our Teutonic-German past, truly also personally in battle. The enemy's dishonorable conduct of the war has reduced to rubble the homes of many, and yet you have lost neither courage nor faith. The harsher the struggle, the more cordially the clans must close ranks . . . .

About a generation ago, there was a rather sterile but revealing debate among scholars of women’s history. One view, which passed for a radical political and feminist stance of a sort, maintained that, because Nazism was a masculinist racial system, women could not have been complicit in the crimes of a regime that also oppressed them. A countervailing and more plausible view called attention to their neglected role as “accomplices,” providing the stable private sphere supportive of the tasks of the politically and militarily active males. As others pointed out, one does not have to choose between victim and accomplice: it was entirely possible for Aryan women, individually and collectively, to be both.

In 1935, Hitler declared, “I would be ashamed to be a German man if only one woman had to go to the front. The woman has her own battlefield. With every child that she brings into the world, she fights her battle for the nation. The man stands up for the Volk, exactly as the woman stands up for the family.” The continuation of that battle meant raising girls to understand the culture and course of warfare. 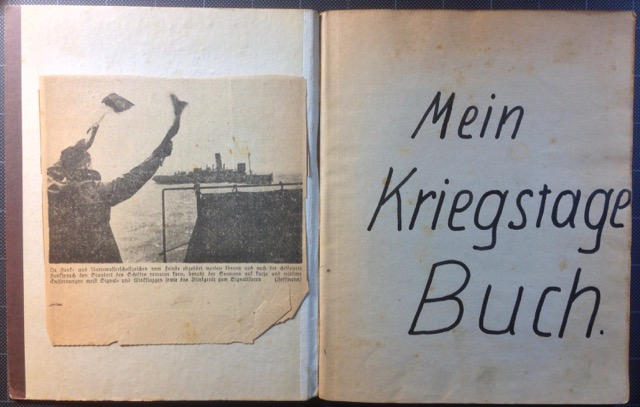 The document takes the form of a notebook of blank pages (c. 16 x 25 cm, with lines ruled in with pencil), bound in faded purplish boards with a black cloth spine. A handwritten label (in an indeterminate hand) on the cover calls it “Kriegstagebuch For [name],” whereas the title page, in the large printing of a child’s hand reads, “Mein Kriegstage Buch [sic].” By contrast, the text entries are all in an immaculate version—thus evidently an adult hand—of the Sütterlin German script taught from 1915 through 1941: under the Nazi regime, the only one from 1935 on. The contents consist of dated entries—generally excerpts from or summaries of press reports, speeches, and the like—accompanied by photographs clipped from newspapers and magazines. Unfortunately, the book covers only the period November 1940 to early February 1941; the reason for that choice is unclear.