Why the lack of recent posts: I needed this like a hole in the head

I must apologize for the recent lack of communication here: to be clear, for my sake, rather than yours (after all, it's not as if I imagine anyone worries or withers away when the posts become fewer and further between).

It can be difficult to stick to a regular schedule under the best of circumstances, but at the beginning of November (in fact, in the early hours of the first day), I had a little accident. It was just a fluke of a domestic accident, but bad enough to injure my back (that went away after a few days) and bang up my head, fracturing my upper jaw and doing assorted other damage, short- and long-term. 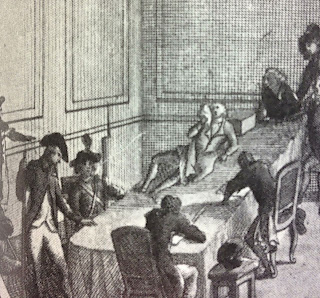 Of course, my basic cheerful-pessimistic philosophy is: it could always be worse, so: no biggie. I didn't want this, but it's nothing compared with a bullet in the lower jaw during the night, followed by the guillotine in the morning (above). That sort of puts things in perspective.

My much less serious little episode put me out of commission, in the serious sense, only for a few days, but it has been something of a nuisance, and it will take several months before I can return to full normal. (Not a good thing for a guy who has to speak all the time for his day job, and then again on occasional evenings for our elected political amateur hour.)

It's hard to say what was the most freakish thing about the accident: the thing itself, or the spooky minor parallels to another one. It was just over a year earlier that our newly appointed Town Manager, John Musante, suffered a (far more serious) head injury while walking his dog, not long before the Snowtober/Snowpocalypse hit. Barely had we dodged the proverbial bullet from Hurricane Sandy this fall when I had my accident, likewise involving a good and innocent dog (though mine was a good deal larger: in fact, weighs more than his veterinarian). Sort of makes you wonder.

Again, I went into more detail than I cared, only in order to explain the silence.

Now it's back to normal soon. I hope to have a bunch of Christmas/holiday/New Year posts ready to go in the new future. You have been warned.

Labels: Amherst/New England History, in eigener Sache, it could always be worse, Select Board


Well, that's the traditional date, anyway: not necessarily the correct one, and to complicate matters, they were in any case of course still using the Julian ("Old Style") rather than the Gregorian calendar, adopted in Catholic states in 1582 but introduced in Britain and its colonies only in 1752 (don't ask).


A traditional image of the arrival of the Pilgrims.

Lucy's painting has so many historical inaccuracies that it's hard to know where to begin—so I won't. From the costumes, to the numbers and types of persons depicted, and the arrival on Plymouth Rock, it's all just so wrong.

Only sixteen persons—six crew, 10 passengers—disembarked that day, and all were male. Historians thus reject the tradition according to which thirteen-year-old Mary Chilton was the first to do so. And the dog in the picture? Close, but no cigar. Records indicate that two representatives of the noble species—a mastiff and a spaniel—indeed made the trip aboard the "Mayflower" but were involved in the explorations of the coast only after this now-famous landing.  It is by moreover by no means certain that the "Pilgrims" (who did not call themselves such; they used the term only in the generic sense of the word, for the uppercase appellation did not arise until the 1790s) landed at the site now designated as "Plymouth Rock." No contemporaneous document mentions the (or even a) rock; that derives from third-hand testimony over a century later. And indeed, no one paid much attention to the "Rock" until the eve of the Revolution, when it began a peripatetic career (more like the wanderings of the Israelites in the desert than a pilgrimage): moved around the town, divided into pieces, and eventually returned, at least in part, to the shore, and graced (?) with a late 19th-century classical architectural umbrella).

About the only thing Lucy got close to right (besides the fact of a landing on the Massachusetts shore) was the color of the clothing. As the painting shows far more clearly than the engraving, he did not depict the Pilgrims clad only in black. Probate inventories show that the Pilgrims had generous and varied wardrobes and had no objection to colored or even decorated clothing. They often favored what were called "sad" colors—meaning deep hues, and not, as a modern reader might erroneously conclude, black and gray. The men here wear shades of brown and russet, and the women, in particular, are depicted as wearing various shades of red and green.

Okay, I guess I just did begin, but I'll stop. Instead, a retrospective smorgasbord of Thanksgiving stories from around the Web.

• CNN Thanksgiving by the numbers: lots of them having to do with turkeys: how long it takes to raise, defrost and cook them, how much of one makes a good serving . . . more

-Langston Hughes (not one of his greats)

• Bad time having Bob Dylan over the Thanksgiving


-Two (count 'em!) pieces on the turkey genome:
-Genome of your turkey
-Pass the Turkey Genome: Researchers are using genomics to breed a better Thanksgiving bird

-Why we don't eat turkey eggs

-Where your turkey comes from (map)

-Don't Forget The Music: A Well-Seasoned Thanksgiving Soundtrack, from NPR

• A miscellany from the Library of Congress:


• And of course, one could not conclude without Art Buchwald's famous attempt to explain Thanksgiving to our French friends (yes, the "Jour de Merci Donnant")

Art Buchwald, Why We Eat Turkey

• From the Vaults: Thanksgiving Retrospective (socialists, eels, eating pregnant insects, a shot and a brew, more)

• Those Darned Illegal Immigrants (the Pilgrims)

• Pardon Me! Another Thanksgiving Piece