Spring in the Air! 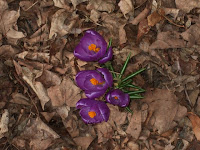 It is the custom of many blogs to include occasional or topical images not necessarily related to the main concerns of the site, and when not abused, it's a nice custom.
Spring is here, and so, the first crocuses in the yard, which appeared in full but minuscule splendor already a day before St. Patrick's Day, need no special excuse.
Nonetheless, there's a roundabout way to connect the seasonal sign to history.
An old joke, told during the era of Emigration:
Nazi era: On a lovely spring day, an American cheerfully greets a newly arrived German-Jewish émigré, whose English is still less than fluent: "Spring in the air!"
The émigré--who interprets spring in the German sense of the verb, to jump--melancholically: "Why should I?"
Variation:
The émigré, bitterly: "Spring yourself!"
Posted by Jim Wald at 16:48 No comments:

Interfaith Dialogue and the Middle East in Amherst (V)

Still catching up on posts.
The fifth and final session, “Becoming a Neighbor,” took place at Grace Episcopal Church on February 2. And what, you may ask, happened to number 4? Snowstorm. It’s a shame, because 4 would have been one of the most intellectually substantive as well as politically challenging, dealing as it did with theology and “the land.” (More on that piece of the syllabus later, perhaps as a sort of retrospective on the whole.)

Reflecting the rather eclectic nature of the series, this session had nothing explicitly to do with the Middle East. Three speakers talked about their experiences of interfaith encounter and dialogue.

• Joan Lindeman of the Interfaith Opportunities Network, a pioneer of this activity and fixture on the scene, spoke first and at greatest length. In essence, she recounted (almost in a day-by-day narrative, it seemed) the development of interfaith organizations and events in the Pioneer Valley. Chief among them were the founding of the Lay[men's] Academy for Oecumenical Studies (LAOS) at the large end of the scale, and a small group of Christians, Muslims, and Jews devoted to discussion of the Abrahamic tradition, in a more intimate scale.

Her main point of substance was a primer on the difference between “dialogue,” “discussion,” and “debate.” As she explained, dialogue is devoted to “exploration, learning, and understanding (including difference).” Discussion, which involves “making decisions and reaching agreement,” can tale two forms, the “polite” and the “skillful.” The former carefully seeks to preserve civility and agreement (perhaps, one might conclude, at the expense of full honesty). “Skillful” dialogue, as the name implies, is more challenging because it does not shy away from controversy. Debate is often the simplest to fall into but least productive, for here, the goal of the participants is “to win.” To be sure, she pointed out, a productive conversation can shift back and forth between these various modes of interaction—but only by mutual agreement.

As illustrations, she cited breakthroughs in Jewish-Christian dialogue, such as the declaration of the Second Vatican Council, the more recent “A Sacred Obligation: Rethinking Christian Faith in Relation to Judaism and the Jewish People,” and the Jewish response of “Dabru Emet: A Jewish Statement on Christians and Christianity" (the Hebrew means, “speak the truth”) which acknowledged the considerable steps that the churches have taken toward understanding and reconciliation.


• Zina Tillona spoke much more briefly (which is to say, for the officially allotted time) and developed a simple but effective lesson by recounting how she came to understand other cultures and their sensibilities while growing up in an Italian and Jewish neighborhood in the World War II era. As she put it, one “befriends a group one person at a time: like the difference between ‘working’ a room and addressing a room.”


• The Rev. Christopher Carlyle, Episcopal Chaplain at the University, gave the most formal and structured presentation, in effect, a fully prepared homily. He began by probing the meaning of the question, “Who is my neighbor?” in the parable of the Good Samaritan (Luke 10:29). Not having attended the other sessions, he was not aware that Rev. Robert Hirschfeld had offered a reading of the same text, but the two efforts were complementary rather than duplicative. Rev. Carlyle went on provocatively to link the passage from Luke to Jesus’ declaration in John 14:6, “I am the way, and the truth, and the life; no one comes to the Father, but by me.”

At least implicitly echoing Joan Lindeman’s definition of “skillful dialogue,” he argued that “we need to face up to the importance of such passages, not dance around them or explain them away.” “Interfaith relations,” he said, “cannot be considered an add-on to the Christian faith or as some adherence to political correctness.” Right on both counts, but what followed seemed to stand that assertion on its head. Now, this is a passage that, for centuries, has epitomized the Christian claim to exclusive truth and salvation. For Rev. Carlyle, however, “the traditional reading of that passage is 180 degrees wrong,” and “the problem lies in our secular understanding”: It is in fact an invitation to inclusiveness. In his reading, “Jesus’ “exclusive” claim was to include everyone.” That is, the “way” here is not faith in Jesus as the messiah, but his “way of behaving,” which was to associate with the marginalized and the underclass.

That may be fine as a homiletic reading. After all, if one believes that a text is divinely inspired and capable of holding a plenitude of meanings, the theologian enjoys a license greater than that of the poet (Talmudic and rabbinic literature is full of such readings, variously fanciful or enlightening). However, if the purpose is interfaith dialogue in Joan Lindeman’s sense of “exploration, learning, and understanding (including difference),” then the assertion is nonsensical. To be sure, the relation between what Jesus, Paul, and the institutional Church taught is a complex one, but it is a complexity that—to cite Rev. Carlyle—one cannot just “dance around” or “explain away.” Interfaith dialogue here is less about the original words in the abstract or in the sense of what we wish they could mean for us today than about the nearly two millennia of interpretation and action that have been attached to them—in other words, very much about “difference.” (And if Jesus is not “the way” to “the Father” and salvation, why join—much less, lead—a Christian congregation?)

Incidentally, one cannot help noting that, for all his attempts at “inclusiveness,” Rev. Carlyle here (as on other occasions) still uses “Pharisee” as a term of opprobrium. Evidently, he has not kept up with at least several generations of scholarship on this topic, which now acknowledges not only that the portrait of the Pharisees in the New Testament is a caricature, but equally important, that Jesus and Paul themselves often taught in the genuine Pharisaical manner.

(Those seeking a complex and subtle account of early Christian-Jewish relations in the context of both actual history and intra-Christian debate would be well advised to turn to Paul Fredriksen’s new Augustine and the Jews: A Christian Defense of Jews and Judaism, which David Nirenberg recently called “that rare gift, a volume much vaster than its title.”)

In any case, the quote-of-the-evening award goes to Rev. Carlyle: “I tell my students, ‘Jesus loved to party, he loved to drink, he loved to eat, he’s always in the streets.’ And my students say, ‘that’s not what I learned in Sunday school.”
Posted by Jim Wald at 16:33 No comments: 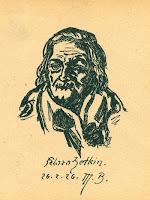 Republicans, who used to be content with using "liberalism" like a swear word, have now taken to calling everything they dislike about Democrats and Washington "socialism" (we may have "Joe the Plumber" to thank for that). Because, as several conservative commentators pointed out in the wake of the election, a party built primarily on "social conservatism" cannot hope to command a majority under the present circumstances, "socialism" proves to be a handy catchall scare word perhaps capable of re-energizing and -uniting under the larger tent of the Republican Party those who "believe in limited government, individual rights, free market capitalism, a strong national defense, and the right to keep and bear arms."
Never mind that nothing being proposed by the new administration has anything to do with real "socialism" (don't tell anyone, but many of Barack Obama's positions in the campaign were in fact more conservative than Hillary Clinton's, more reliant on private initiative and private property). It's still worth taking the trouble to point out some of the many historical accomplishments of the socialist movements and social democratic parties.
One was concern for women's rights, long before the topic became fashionable. Even if most people no longer find his analysis completely compelling, Friedrich Engels thought it worthwhile to investigate the Origins of the Family in relation to the division of labor. August Bebel's Woman and Socialism, a bestseller among publications of the German Social Democrats, proclaimed:

The Socialist Party is the only one that has made the full equality of women, their liberation from every form of dependence and oppression, an integral part of its program; not for reasons of propaganda, but from necessity.
For there can be no liberation of mankind without social independence and equality of the sexes.

And it was also socialist Clara Zetkin (1857-1933) who in 1910 called for a holiday to honor the accomplishments of women and promote the rights of women First celebrated on 19 March--the anniversary of the initial victory in the German Revolution of 1848--it has been marked on 8 March since 1913 and recognized by the United Nations since 1975.
Follow celebrations of International Women's Day 2009.
Posted by Jim Wald at 23:18 No comments:

Having been preoccupied with work and work-related distractions, I find myself behind in posting these past two weeks. Look for a batch of updates this weekend on various topics, including some of the recent political controversies at Hampshire College.
Posted by Jim Wald at 16:12 No comments: