This year, as every year, Amherst celebrated Human Rights Day, marking the anniversary of the promulgation of the Universal Declaration of Human Rights (10 December 1948).

Members of the Amherst Select Board have few ceremonial duties, none of them obligatory. Still, I do relish the ones that have both historical and civic meaning. Participating in this commemoration, like those held on Veterans Day, Memorial Day, and the 9-11 anniversary, is among such quasi-obligations that I value most. The others are held in spring or summer weather. This one, by contrast, is the most universal in significance but the least well attended, held on what invariably proves to be one of the most frigid days in December, as we remind ourselves that winter has not even begun. The fact that the event usually takes place after dark, by electric candle light, only adds to the sense that we are doing something important, keeping something very important alive.

Attendance is also low, however, because, whereas the other dates are established US holidays, this one is not. Few of us know of the Declaration, and even among those who are familiar with it, few are aware of the real story. At best, we "know" that Eleanor Roosevelt had something to do with it. Well, not that much, and she certainly was not the only one.  I always refer people to an admirable article by the equally admirable and courageous Gita Sahgal, a founder of the Centre for Secular Space. She reminds us of two crucial points:

(1) "Many of the assumptions about who wrote the Universal Declaration of Human Rights are wrong. The less known story of the men and women who wrote this foundational, emancipatory and anti-colonial document must be told in today's world."


(2) That in turn should serve as a rebuke to those on both right and left who dismiss the notion of human rights as, respectively, a sign of liberal elitist weakness or a reactionary bourgeois affectation, not to mention those who claim an exemption from these universal standards for a particular culture or faith.


Universal Human Rights--and now, more than ever, the rights of immigrants

This year's ceremony was a little bit different. Because the anniversary fell on a weekend, Human Resources and Human Rights Director Deborah Radway and the Human Rights Commission decided to begin in the afternoon and daylight, at 4:00 p.m. 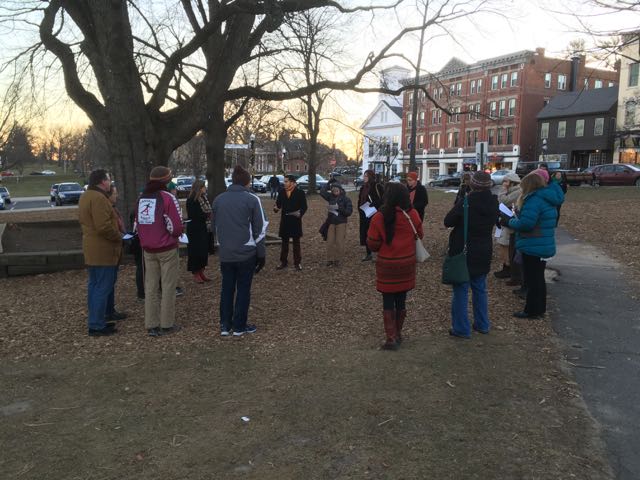 And, given the toxic climate surrounding the recent presidential campaign and the rise of new nativist, anti-immigrant sentiment, the Select Board proclamation of the holiday explicitly reaffirmed the Town's decision (represented by a Town Meeting vote of 2012) to do the utmost to protect the rights of immigrants, including the undocumented, from what was regarded as unnecessary and excessively aggressive government intervention:


Then THEREFORE, BE IT RESOLVED that the Town of Amherst and its officials and employees,

to the extent permissible by law, shall not participate in federal law enforcement programs relating to immigration enforcement, including but not limited to, Secure Communities, and cooperative agreements with the federal government under which town personnel participate in the enforcement of immigration laws, such as those authorized by Section 287(g) of the Immigration and Nationality Act. Should the Commonwealth of Massachusetts enter into an agreement or Memorandum of Agreement regarding Secure Communities, the Town of Amherst shall opt out if legally and practically permissible. To the extent permissible by law, immigration detainer requests will not be honored by the Amherst Police Department. Municipal employees of the Town of Amherst, including law enforcement employees, shall not monitor, stop, detain, question, interrogate, or search a person for the purpose of determining that individual’s immigration status. Officers shall not inquire about the immigration status of any crime victim, witness, or suspect, unless such information is directly relevant to the investigation, nor shall they refer such information to federal immigration enforcement authorities unless that information developed is directly relevant. The use of a criminal investigation or arrest shall not be used as a basis to ascertain information about an individual’s immigration status unless directly relevant to the offenses charged.”

For the record, this is the first time that I (or anyone else, as far as I can tell) can recall a Town Manager taking part in this event: big props to Paul, who doesn't even live here yet on a permanent basis and is still commuting from Somerville.

Human Rights Day in Amherst: the 2015 post, describing the origins of the Declaration, with still and video footage from Amherst commemorations, 2011-2014.