Although the Nazis, whose fascist ideology stressed militant action, presented their entry into the government as a “seizure of power” (Machtergreifung), it was in fact the result of stalemated domestic politics and cynical maneuvering on the part of other right-wing elements who assumed they could best their rivals by coopting the more radical movement. On 30 January 1933, German President Paul von Hindenburg, as head of state, appointed Adolf Hitler Chancellor as head of a government comprising a broad coalition of the right.

A middle-class woman and supporter of the Nazis recorded in her diary:

And what did Dr. H. bring us? The news that his double, Hitler, is Chancellor of the Reich! And what a Cabinet!!! One we didn't dare dream of in July. Hitler, Hugenberg, Seldte, Papen!!!

On each of them depends part of Germany's hopes. National Socialist drive, German National reason, the non-political Stahlhelm, not to forget Papen. It is so incredibly marvellous that I am writing it down quickly before the first discordant note comes, for when has Germany ever experienced a blessed summer after a wonderful spring? Probably only under Bismarck. What a great thing Hindenburg has achieved! [....]

Huge torchlight procession in the presence of Hindenburg and Hitler by National Socialists and Stahlhelm, who at long last are collaborating again. This is a memorable 30 January!

This postcard, issued on 29 January 1934 to celebrate the first anniversary, depicts the victory procession through the Brandenburg Gate, over the opening verse of the national anthem.

At upper right, the image flanked by the postage denomination depicts Chancellor Hitler and President von Hindenburg. Although Hindenburg had spoken dismissively of the “Austrian corporal,” even days before appointing him, the Nazis turned the unequal (and uneasy) relationship to their advantage, coining the slogan,“The Field Marshal and the Corporal.” The victor of Tannenberg together with the ordinary frontline soldier of the Great War symbolized the alliance of old elites and everyman, the transition between generations.

In the process, the Nazis shrewdly presented Hindenburg first and foremost as the World War I hero rather than as a political authority: President of the discredited Weimar Republic and now "new Reich." Hindenburg's death later that year allowed Hitler to combine in his person the offices of President and Chancellor, a step generally seen as the cementing of the dictatorship. Henceforth members of the armed forces swore personal allegiance to Hitler as Chancellor and Führer.

A Budget. Dedicated to Amherst

It cannot be often that a document as important yet prosaic as a municipal budget comes with a dedication, but such was this case this month, as the plan governing Amherst's fiscal year 2017 was made public.

The budget prepared by Finance Director Sandy Pooler (in consultation with Town departments and committees, of course) and presented by Interim Town Manager Dave Ziomek bore a touching dedication to our Town Manager John Musante, whose sudden passing less than half a year earlier shocked the community.

John brought many skills and virtues to government, but it was not least his skill as the former Finance Director (one so highly accomplished that he did workshops for officials around the state, using Amherst as a model) that created the foundation of stability and calculability permitting him to lead us in major endeavors in other fields. 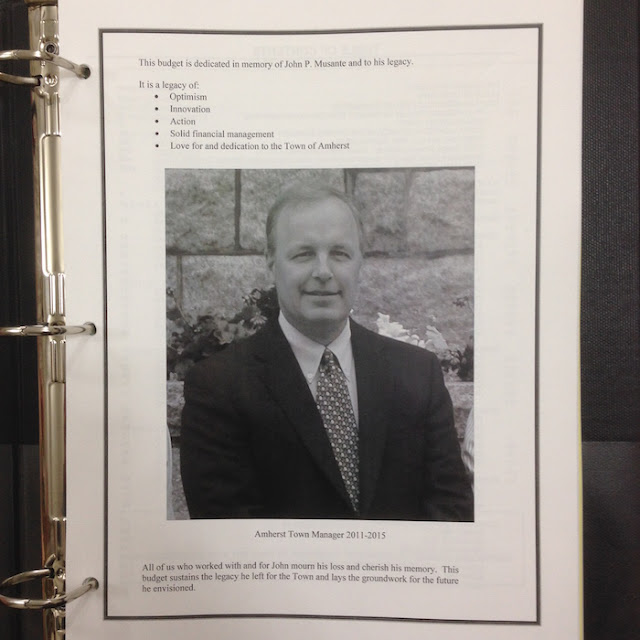 This year's budget presentation marked a transition in more ways than one: even as it commemorated John's passing, it reminded us of two other looming changes. John was known for making excellent appointments, because he had the wisdom and self-confidence to build a team of other strong and talented individuals. Among them was Finance Director Sandy Pooler, whom he brought here five years ago. The budget was presented on Sandy's last day at work here, as he prepared to return to the eastern part of the state to take up a new position as Deputy Town Manager of Arlington (the news report there provides an overview of his extensive experience and accomplishments). Meanwhile, Interim Town Manager Dave Ziomek, who made the formal budget presentation, prepared to return to his regular post as Assistant Town Manager and Director of Conservation and Development, as we awaited the arrival Temporary Town Manager Peter Hechenbleikner and the start of a search for a regular Town Manager.

Looking back on the difficult past four months, and ahead to the hiring of a new regular Town Manager some six months from now, I am left with one thought. In the aftermath of John's tragic and unexpected death, I invariably heard two things from my fellow residents: first, expressions of deep sadness and shock at the news of John's passing, but invariably followed by a second statement: The Town is in excellent hands. You've got an excellent team in Town Hall, and we know everything is going to function smoothly.

Indeed it has. We have done very well under trying circumstances. John, Sandy, and Dave have set a very high standard for their successors.