The Nazis were nothing if not culturally acquisitive. Although harshly critical of modernist art and literature, they portrayed themselves as the heirs and custodians of the great European and German national cultural traditions (the mirror image of the German Marxist claim). In some cases, the appropriation was easy. In others, a certain amount of manipulation or disingenuous treatment was required.

In the literary realm, the great Weimar Classicist writers and friends Goethe (1749-1832) and Schiller (1759-1805) stood at the center of the effort, though not all the works of these humanistic authors readily lent themselves to the messaging of a racist and dictatorial regime. Although Goethe's "Faust" could, with some gymnastics, be held up as the portrait of the archetypal "Germanic" soul, Schiller's drama Don Carlos proved awkward when audiences applauded the line, "Sire, give us freedom of thought!" And in 1941, Hitler requested that Schiller's anti-tyrannical drama Wilhelm Tell no longer be performed. Be that as it may, a general emphasis on the Nationalliteratur, reinforced by selective quotation, remained an effective overall policy.

The glorification of the national cultural tradition extended to Kitsch and collectibles. These small glass Schiller Christmas ornaments (c. 30 x 35 mm) were given to donors at street collections for the Winter Relief Work effort in March 1941. 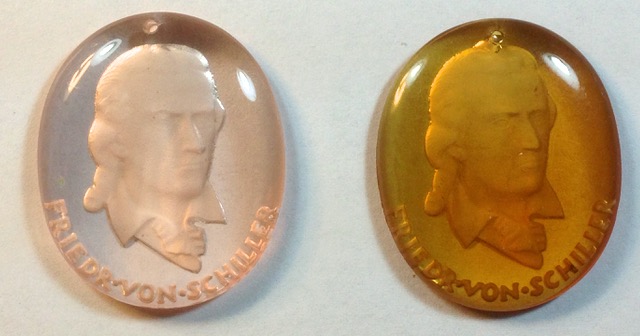 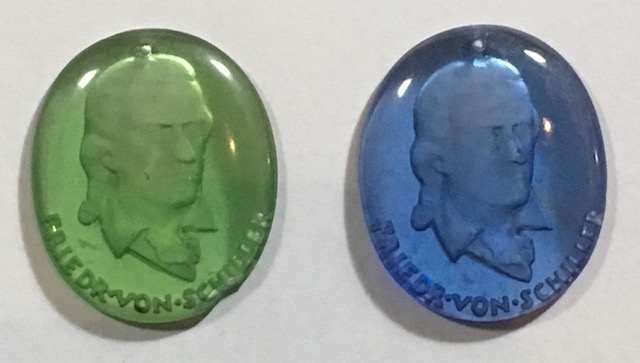 Some recipients may actually have used them as tree decorations, but the Winterhilfswerk also offered an album for collectors.


The series,"Heads of Famous German Men," included Hitler (featured on the album cover above), historical military leaders, and artists and composers from Dürer to Wagner. Goethe and Schiller were, along with philosopher Immanuel Kant, the only literary figures.

It was a travesty of the German intellectual tradition. On the other hand: if only other countries took their literary heritage so seriously that they felt the need to co-opt and distort it.