Forging Peace in the Middle East, Town-to-Town, and Person-to-Person

I recently noted that there had been some hopeful signs concerning discussion of the Middle East conflict on campuses in our Five-College consortium. Two events that took place in April were a case in point—and doubly so: first, because of the content itself, and second, because they took place without incident.

In the first case, a student at Hampshire organized the event on her own as a result of the "disgust" that she felt for the campus atmosphere. A self-described progressive Zionist, she describes herself as "highly critical of Israel's policies and government" (even calling them "racially oppressive"), but at the same time rejects the idea that Zionism is "inherently racist" or a promoter of "an agenda of genocide." The answer, for her, is to reform and improve the state, not to eliminate it.

On April 13, she therefore brought as a speaker Yaniv Sagee, Israel representative for Givat Haviva Educational Foundation in North America. Givat Haviva, which grew out of the left socialist HaShomer HaTzair and kibbutz movements, is dedicated to breaking down the divisions in Israel society and "educating for peace, democracy, coexistence and social solidarity." Among its key initiatives are the Jewish-Arab Center for Peace (dating back to 1963) and related efforts at intra- and intercommunal peace-making.

Although I very much wanted to attend the event, I was unable to do so. However, it attracted an audience of some 50 or 60, including several faculty and even the College President. All came away favorably impressed.  Members of Students for Justice in Palestine were also present. They asked tough questions and received equally forthright replies, in a respectful manner. Exactly as it should be. It is a sad commentary on the current situation that one needs to single out such things as worthy of note.

In her lengthy letter to the community, the organizer wrote: "I call for a restructuring of the state of Israel--an intervention, an overhaul." Many will find such a demand, coming from an American college student, naive at best, even leaving aside the unfavorable international and domestic Israeli political constellations. (The language, wavering revealingly between the vocabulary of bureaucracy, pop psychology, and auto repair, will not necessarily dispel that impression.) However, few will quarrel with her call for increased person-to-person cooperation between Jews and Arabs.

Just how that works on the ground was perhaps better demonstrated in the second event, organized by students at the University of Massachusetts, on April 28. What was most interesting was that the initiatives presented were not the work of educational foundations or NGO's, and rather, of entire communities living and working together day in and day out. They are the creation of no-nonsense elected politicians who have a job to get done, whether it is garbage collection or economic development. It's not as sexy as "activism," but it is ultimately where lofty ideals settle on the soil of practical political reality and either wither or take root.

Three representatives from Israel's regional council of Gilboa—the Jewish-Israeli head of the Council, Dani Atar, the Arab-Israeli Deputy, Eid Saleem, and the Jewish-Israeli CEO, Ilana Hayat—shared their stories of forging coexistence between Arabs and Jews both at home and in cooperation with their neighbors in the Palestinian Governorate of Jenin, just across the border. Representatives of the latter, originally scheduled to take part, as well, proved unable to attend due to the obligations of an election campaign at home. 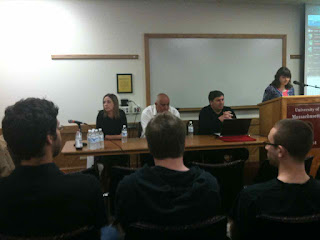 Interethnic cooperation at home is of course an urgent necessity in a country whose population is 80 percent Jewish and 20 percent Arab, and especially in a regional council whose population is 60 percent Jewish and 40 percent Arab, and which suffers from social inequities on both levels. Cooperation with the Palestinians across the border might not seem like an option right now, but, geopolitical conflicts or no, many residents—including the deputy mayor—have relatives across the border. Above all, though, the leaders of the two communities, like their counterparts elsewhere, came to the conclusions that the two populations are linked by common challenges, which they must solve together.

The speakers said that they proceeded from four basic principles: 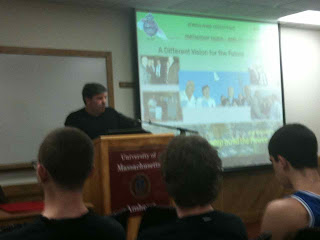 The presentations detailed a host of cooperative ventures, ranging from social policy to industry and cultural tourism. Given the wide income disparity between the two regions—Jenin residents earn on average $ 1000 per year, whereas their counterparts in Gilboa earn $ 30,000—economic development understandably looms large.

In many ways, the area is a natural target for economic development, constituting the lower tip of a triangle, with the other points at the port city of Haifa to the west, and Jordan in the east. Eid Saleem detailed the establishment of an industrial zone and logistics area along the mutual border: the former in Jenin, and the latter in Gilboa, in order to foster exports. Eventually, the two communities hope to tie the regions and and functions still more closely together through new rail and road connections. Part of the success to date derives from the fact that they ensured, first, that the border separation fence would follow the “Green Line” and second, that there would be a crossing here. As Saleem added, “When you have a border crossing, you don’t really need a fence.” It is moreover a crossing created by the local civilians rather than the military. The partners have increased its size threefold so as to reduce delays and other inconvenience, and it can now accommodate a traffic of 2500 persons per hour.

Gilboa also provided land for a Palestinian hospital, to to be created by a Turkish developer. Another project is a center for international business, to be led by the heads of the two regions. Among its supporters are former UK Prime Minister Tony Blair, who has taken a particular interest in Middle East peace efforts. In toto, the new initiatives have created 15,000 jobs for Palestinians.

Impressive though these achievements are, the two communities view joint tourism projects as their most significant and distinctive endeavor, which they hope to develop into an exportable model. Gilboa and Jenin presented their ideas and programs at the ITB international tourism conference in Berlin. As they see it:


• Tourism can make a crucial economic contribution to the region.
• In order to educate visitors from abroad and strengthen ties between residents, the two communities market tour packages of 2-3 days each on both sides of the border.
• Tourists visit places of interest in both:
• The communities target audiences with special characteristics: e.g. supportive of peace, interested in religion and history; research groups.

There is a vast and underappreciated array of natural and historic resources that would be the envy of any region seeking to attract visitors. For example, few outsiders know that Burqin, near Jenin, is the site of the fifth-oldest Christian sacred place and third-oldest church in the world. According to tradition, Jesus performed a miracle and cured lepers here on his way from Nazareth to Jerusalem. Mount Gilboa was the setting for events in the biblical Book of Samuel, and it is today the home to major nature preserves. Atar, who hopes ultimately to attract 100,000 tourists per year, noted that most outsiders incorrectly assume the region is characterized by daily war, violence, and destruction. The first task, then, is to change this misperception, to help people to achieve a more complex and nuanced view.

As Hayat explained, one of the most original undertakings is the creation of centers that will allow residents to learn—literally—to speak a common language. Each town will have an identical language center, in which instructors from the other will teach their language. The centers will also offer study opportunities in English, French, German, and Spanish. Visitors from abroad can visit in order to study or to teach, an opportunity that she urged the audience to consider

What was in many ways the most engaging and moving portion of the evening came when Eid Saleem—like his counterparts, speaking in Hebrew through an interpreter—explained his personal connection to the issues—most of his relatives live in Jenin—and the rise of cooperation between the two towns under very trying circumstances.

Already when first elected in 1994, he had initiated contacts and invited Palestinian representatives to visit and begin a dialogue. He described those first years after the signing of the Oslo Accords as a wonderful period characterized by the development of ideas and dialogue until cut short by the Second Intifada. He characterized it with the word, “Churban” (a term also used, incidentally, to describe the devastation of Jewish communities in Eastern Europe during World War II), which brought “despair and destruction for both sides.” Although the two regions had tried to continue their cooperation, it proved to be impossible after a few months, as the fighting dragged on. Several locals perished, and it was “a time of deep mourning for both sides.” He himself went to comfort the bereaved in both communities, saying, “a daughter is a daughter, and a mother is a mother.”

The crisis posed the greatest imaginable challenge to the relationship, which nonetheless survived it. The partners involved in coming to a modus vivendi were at first sight the unlikeliest, but in fact perfectly suited to the task: two men of roughly the same age who had been intimately involved in the conflict. The new governor of Jenin, Quadoura Moussa, was the head a delegation that had visited Gilboa in 1995, but in addition a “Palestinian patriot” who had moreover spent a dozen years in Israeli prisons in the preceding era. On the Israeli side, the local leader was a Lieutenant Colonel in the IDF, who had been wounded in combat. Having experienced the worst of the conflict firsthand, they were determined that a new generation should not have to go through what they had suffered. They held secret meetings, assuring one another of their good intentions and seeking to reduce tensions and risk of conflict. The symbolic and practical turning point came when the representative from Jenin asked his Gilboa counterpart to secure medical care for a young Palestinian who had been wounded fighting the Israelis. Emotions and security risks notwithstanding, the Israelis agreed, and that event played a key role in forging a strong alliance between the towns.

In the course of the question-and-answer session, someone said that the stories were inspiring but asked whether the population as a whole really supported these efforts. The answer:  We've been elected to four terms and have now been working together as a team for seventeen years. Proof, if any was needed, that the public desires cooperation and peace and understands the benefits that they can bring.