One of the great days in the history of revolution, democracy, and warfare:  The revolutionary French Republic, threatened by invasion on its borders and civil war at home, declared the "levée en masse," or mobilization of the entire nation, in what was the precursor of modern total war:  military, economic, and ideological, practical, symbolic, and psychological. 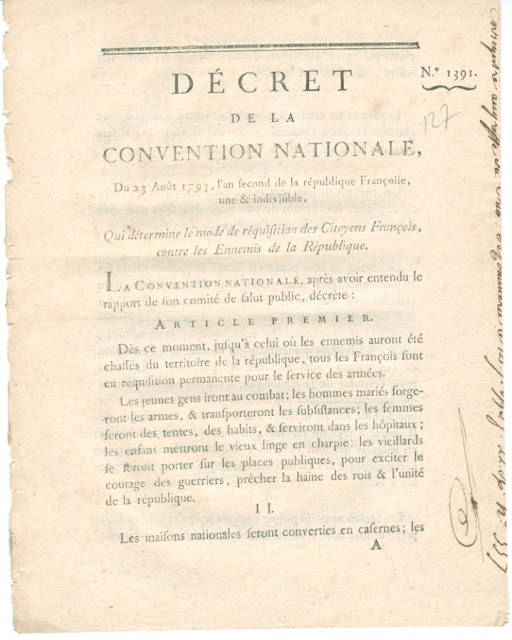 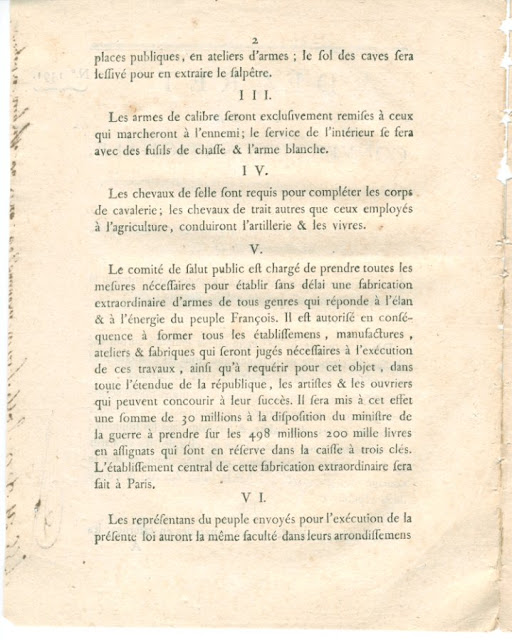 The six-page decree of the National Assembly, drafted by Lazare Carnot—the "architect of victory"—begins with the famous exhortation:


1. From this moment until that in which the enemy shall have been driven from the soil of the Republic, all Frenchmen are in permanent requisition for the service of the armies. The young men shall go to battle; the married men shall forge arms and transport provisions; the women shall make tents and clothing and shall serve in the hospitals; the children shall turn old linen into lint; the aged shall betake themselves to the public places in order to arouse the courage of the warriors and preach the hatred of kings and the unity of the Republic.

2. The national buildings shall be converted into barracks, the public places into workshops for arms, the soil of the cellars shall be washed in order to extract therefrom the saltpeter.

3. The arms of the regulation caliber shall be reserved exclusively for those who shall march against the enemy; the service of the interior shall be performed with hunting pieces and side arms.

4. The saddle horses are put into requisition to complete the cavalry corps the draft horses, other than those employed in agriculture, shall convey the artillery and the provisions.

5. The Committee of Public Safety is charged to take all necessary measures to set up without delay an extraordinary manufacture of arms of every sort which corresponds with the ardor and energy of the French people. It is, accordingly, authorized to form all the establishments, factories, workshops, and mills which shall be deemed necessary for the carrying on of these works, as well as to put in requisition, within the entire extent of the Republic, the artists and workingmen who can contribute to their success.

7. Nobody can get himself replaced in the service for which he shall have been requisitioned. The public functionaries shall remain at their posts.

In his classic history of the Revolution (already more than half a century old in its second edition), the great Georges Lefebvre notes that the levy was in part a response to pressure from below for more radical political and military measures, and moreover notes that the decree marked an important step in the efforts of the Committee of Public Safety—hence, the role of the quintessentialy calculating and systematic Carnot—to take control of an unruly revolutionary society that required discipline if it hoped to be victorious. The modern revisionist Simon Schama amplifies and reinterprets this view:


In its original incarnation, then, the levée was meant to be a spontaneous explosion of martial enthusiasm involving large numbers of men, loosely organized and separated from the professional army.  It need hardly be said that this version of anarchic belligerence did not recommend itself to the engineers and technologists of the Committee of Public Safety. But it was a nonmember, namely Danton, who in the third week of August tried to put the concept of a conscript army back on the rails by making its expansion strictly proportionate to the amount of munitions, clothing and food with which it could be supplied.  The inspiring rhetoric of the Convention's decree in August was less a prescription for an uncoordinated call to arms than a vision of a militarized commonwealth with every lever and pulley working in perfect articulation.  The language drew heavily on Roman history, but the vision was that of Guibert's total war.