The Battle of Hohenlinden east of Munich in 1800 was in some sense the predecessor of the later battle of Austerlitz (1805). The great victory at the latter ended the War of the Third Coalition by forcing Russia to withdraw its forces and Austria to sue for peace, leaving England to fight alone.

In the campaign of 1800, Napoleon's victory at Marengo (June 14) stands out as the stuff of legend but, despite the initiation of peace talks with Austria, the war continued. It was in fact the great victory by General Moreau at Hohenlinden near Munich half a year later that turned the tide of the war. His subsequent advance threatened Vienna, which signed an armistice on Christmas Day. Subsequent French gains in Italy led to the defeat of the Second Coalition and the Peace of Lunéville in February of the following year. 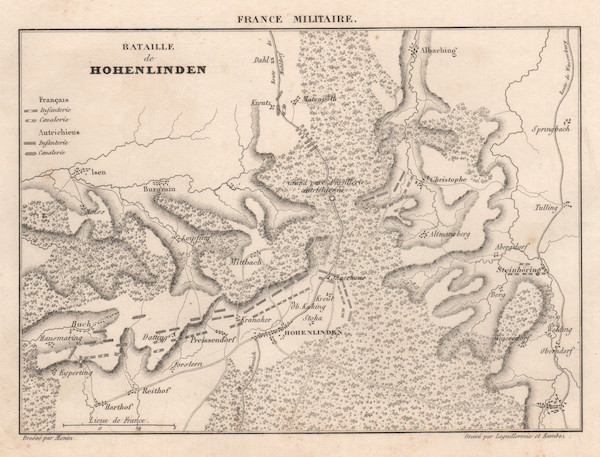 There is another connection between Marengo and Hohenlinden. The former was Bonaparte's first major victory after assuming power, and he was determined to aggrandize his role--even to the point of rewriting history--at the expense of the commanders who actually saved the day. He therefore resented Moreau's fame after the German battle, viewing the general as a potential rival. The latter was foolish enough to contemplate such a role for himself and became embroiled in a royalist plot that led to his imprisonment and then exile in the United States in 1804. Historical opinion today is more inclined to affirm Moreau's essentially republican sentiments but fault him for his bad judgment and political ambition (the latter driven in part by his wife). He fell at the Battle of Dresden, fighting with the Russian forces in the Wars of Liberation against Napoleon.