From the Protest Rally Against the Hampshire College Flag Policy


In response to students' anger and fear in the wake of the presidential election and their protests that the American flag represented racism and oppression, Hampshire College controversially decided on a temporary removal of the national symbol in hopes of calming the situation and fostering dialogue. 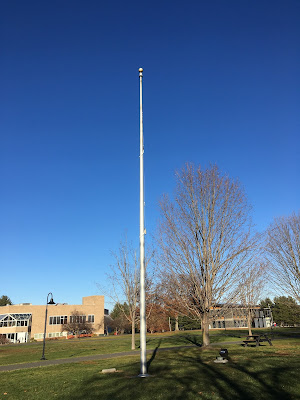 The public reaction surprised the College (but hardly anyone else): incredulity and outrage.

Amherst’s Veterans of Foreign Wars Post 754 organized a mass protest on the Hampshire College campus for the Sunday after Thanksgiving (November 27). A large crowd from around New England--particularly but not exclusively veterans and their families--gathered at the entrance to the College on Route 116. Although the press put the size of the crowd at around 400, the organizers, who issued over 5,000 invitations via social media, estimated attendance at 1,500 to 2,000: which is to say, greater than the annual enrollment at the College.

I was present, along with a few other members of the faculty and student body. 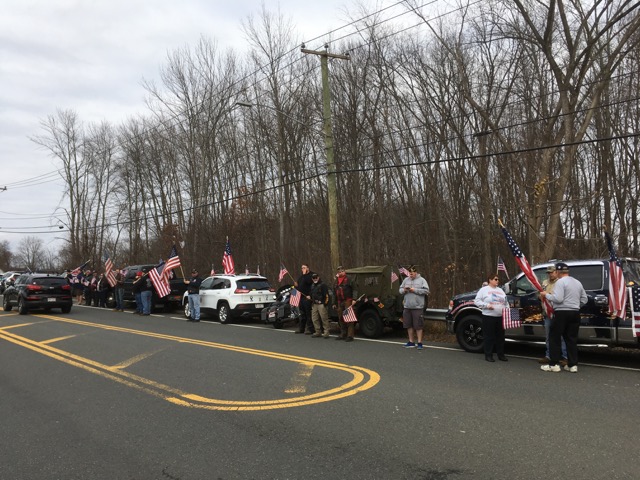 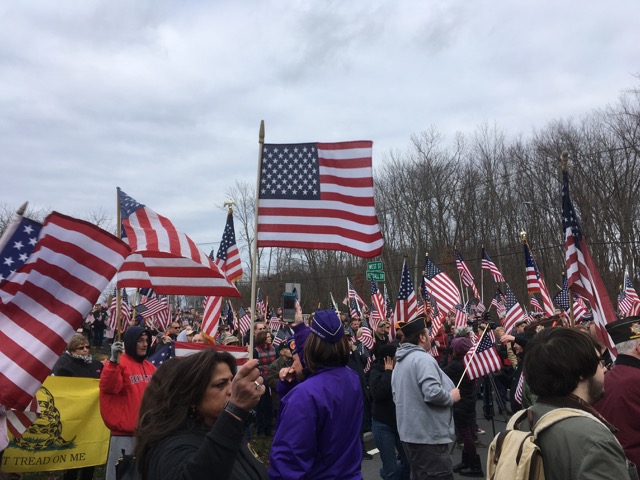 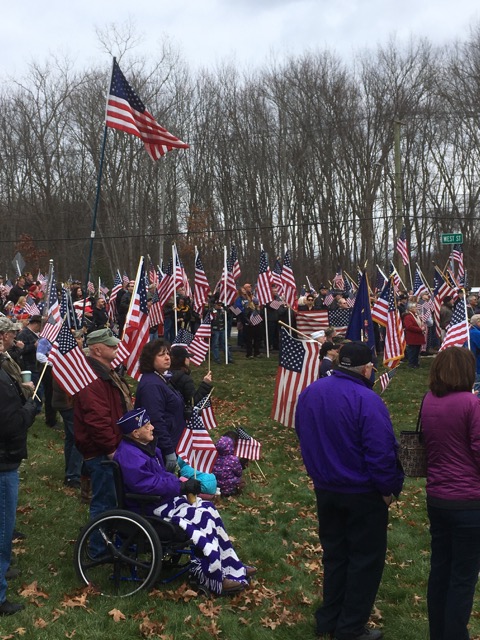 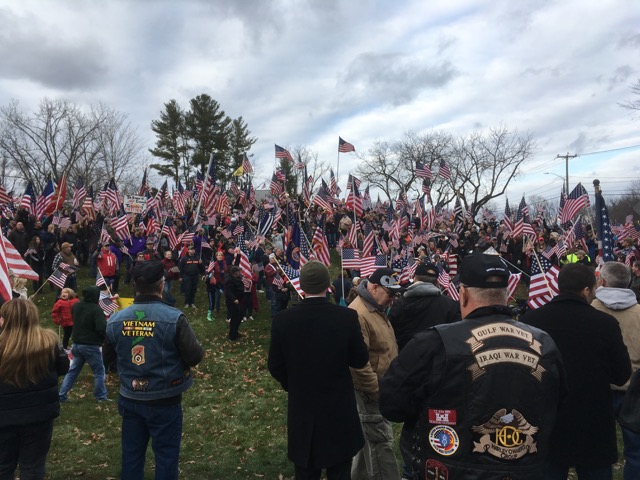 Not exactly the alt-right

In the wake of the presidential election and the tensions that it engendered, many in the Hampshire and wider Amherst community (who did not bother to attend or were scared to do so) leaped to the conclusion that the event was a gathering of right-wing extremists and hatemongers. On the contrary, the organizers took care to avoid giving the formal program any particular political slant. In fact, the most prominent speakers were centrist or left-liberal Democratic politicians: State Rep. John Velis (Westfield), Springfield Mayor Domenic Sarno and Councillor Kateri Walsh, and Northwestern District Attorney David Sullivan. Several of the speakers were non-white and immigrants. A member of the local veterans' color guard was transgender.

The presence of the regional political figures caused no little consternation among the Hampshire faculty, who complained in high dudgeon that outsiders were interfering in our internal affairs and attempting to intimidate the College. It is an ironic argument. The politicians were simply exercising the same right of free speech about an issue of deep concern as the students who burned the flag and the President who banned it. (And, for the record: in my many years of working here, I had never known the College to bow to the wishes of any outside force, least of all, provincial politicos.)

Still, even neutral outsiders remarked on the unusual presence of these visitors. (Most expressions of surprise focused on the presence of Mayor Sarno, who, as a friend of mine from beyond the walls of the academy drily observed, "has never even come to pee in Amherst.") The most parsimonious explanation is, however, generally the most plausible. (It is possible to overthink an issue.) The cynical consensus among outside observers was that the aim was grandstanding rather than intimidation. Seeking to score easy points with their base is, after all, what politicians do. But politicians also have convictions. The idea that the flag had powerful emotional meaning for them, and that they therefore cared sincerely and deeply about its presence or absence, is a difficult one for the academic mind to grasp.

Rep. Velis is not just a politician from the Pioneer Valley, but also an Afghanistan veteran. As for DA Sullivan, he is a frequent attendee at events in Amherst, and he moreover has extensive professional experience in military affairs, having served as a civilian lawyer for service personnel and most recently, working to establish a new veterans' court providing treatment for trauma disorders and substance abuse. Mayor Sarno, too, paid tribute to the veterans, but he explained that the flag had further personal significance for him.


The flag of a nation of immigrants

Sarno was one of several speakers who highlighted the role of immigrants. The flag had special meaning for him as the son of Italian immigrants who had experienced Fascism and survived the Nazi occupation of Italy in hiding. To them it had been a symbol of hope and freedom.


Event organizer Victor A. Nunez Ortiz came to the United States when his family fled the Salvadoran civil war. He served in the Marines even before becoming a US citizen. He refers to this experience when introducing the next speaker.


Another veteran who had served in the US military as an immigrant non-citizen was Veasna Roeun of Connecticut: a survivor of the Cambodian genocide. 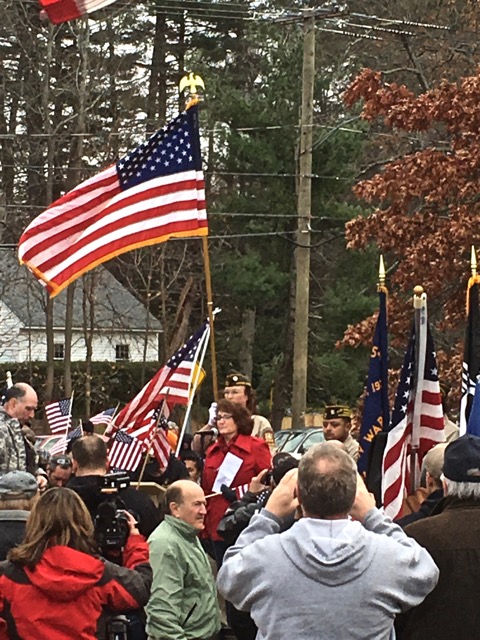 Here, well known local civic and political figure Bonnie MacCracken speaks. She read a poem about Blue Star Mothers. Bonnie, a candidate in the recent Democratic primary election for state representative from the third Hampshire district, is a member of the Democratic State Committee and has long been active on behalf of progressive social causes, among them racial and economic justice (especially housing issues) and early education.

The red meat right-wing exception in this program was the brief address by Mount Holyoke student and conservative activist Kassy Dillon, who focused her remarks on a critique of the College and its students. She explained, "I wrote the first story" about the flag flap, adding that the Hampshire student who had passed on the news to her was now "being bullied by other students."

Despite repeated assertions that Confederate flags and other racist symbols were on display, neither I nor anyone I subsequently spoke with saw them--and no one has to date produced any photographic proof. It does not seem unreasonable to conclude--given the nature of the controversy, and what I saw--that many in the crowd were to the right of center, but that is not the same thing as "alt-right" "white supremacists."

To be sure, there were a few displays that I could I could have done without: this anti-UN flag, for example (though without talking to the owner, it was impossible to tell whether it represented standard arch-conservative gripes about "anti-American" multilateralism or something notably more rancid). 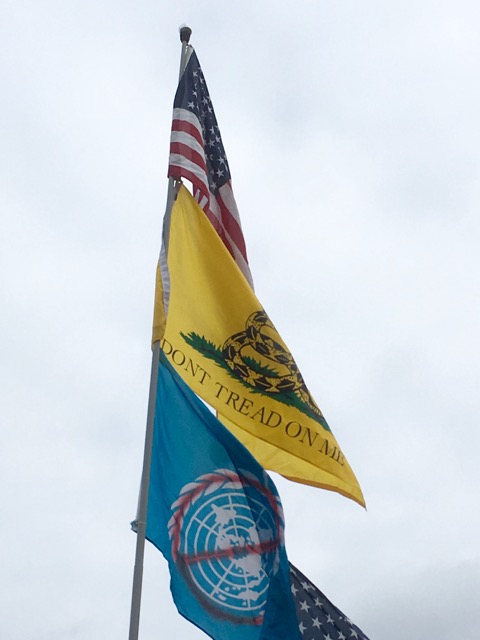 I also spotted several "Don't Tread On Me" flags. The right-wing "Tea Party" movement adopted the Gadsden Flag (as it is more properly called) in 2010, though as everyone should know (and Mount Holyoke historian Joseph Ellis explains), it is a venerable emblem of the American Revolutionary era, appropriated in the meantime by various groups as a symbol of protest. 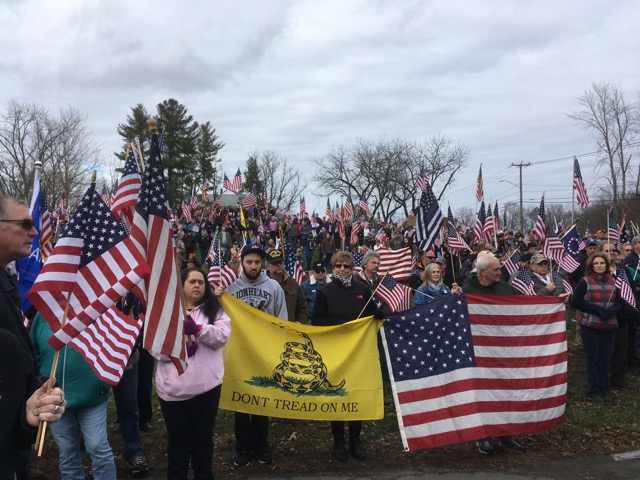 On the whole, the tone was respectful of the College. Of course, the organizers could not regulate who showed up, and a few of the signs were obnoxious and juvenile. One placard (referring to Vladimir Putin or just left over from the Cold War?) advised Hampshire students: if you don't like it here, go get an education in Russia. Another, in what the creators no doubt considered a masterpiece of wit, relied on hackneyed scatological imagery. 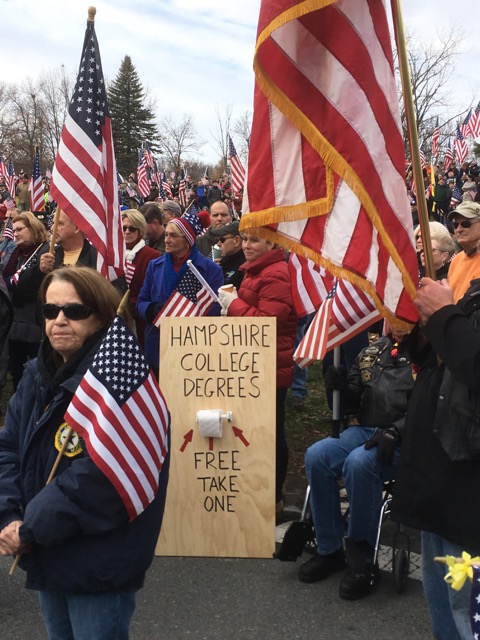 By contrast, this sign, playing on the Hampshire College motto, took a lighter approach, and was perhaps marginally more effective. 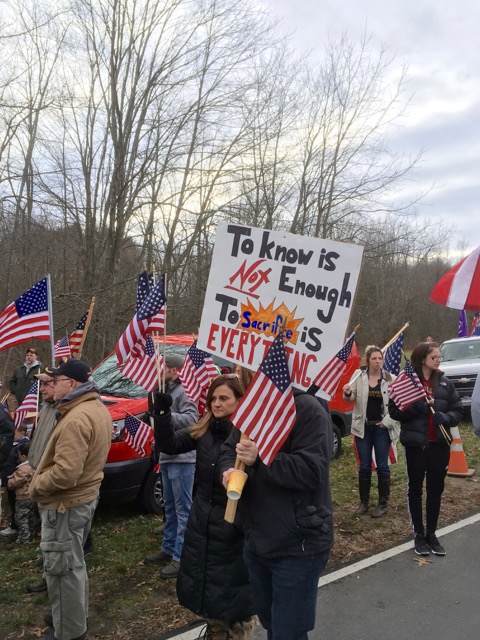 The organizers had stressed the need for civility prior to the event:


this a PEACEFUL DEMONSTRATION OF FREEDOM as citizens of our United States of America. . . Families will be present and order is to be expected.

At the rally itself, they reiterated this request and moreover made a point of thanking the College for allowing them to meet on campus property. Here, veteran and Purple Heart recipient Micah Welintukonis of Connecticut, who presided over much of the event, offers to provide microphone time to the President or any other administrators who might be present (none were) and then leads the crowd in the chant, "Raise that flag!"

At one point, though, one saw how things might have taken a more dangerous turn. Toward the end of the event, the organizers wanted the participants to assemble near the large Hampshire College sign for a group photo that they hoped would go viral. As they asked people to move away from the sign so that the wording would be visible, we saw a young man sitting on the ledge in front of it, giving people the finger with both hands. The organizers, at first thinking he was one of their own, mocking Hampshire College, chided him for his vulgarity. It turned out, however, that he was a Hampshire student flipping off the demonstrators rather than the College and seeking to spoil their photo op. The crowd became more agitated. Several people seemed prepared to remove him by force and others tried holding a flag in front of him to block him from view but the speaker urged them to remain peaceful and let the campus police provide order. The speaker engaged in some mild taunting of the hapless student but also offered him the microphone. After a few minutes of this standoff, things quieted down. Subsequent press reports described some uglier aspects of the confrontation, but from where I was standing at the time, near the podium, I could see and hear none of that.

Coming to a close

As the rally wound down, attendees sang "God Bless America."


In the low-key conclusion to the event, the speaker reminded attendees that "we are all Americans" and urged them to tell the College: "raise our flag!"

The veterans had planned to return a week later for a second rally, but when the College suddenly announced on December 2 that the flag was going back up, they canceled the event as what they called an "act of faith": 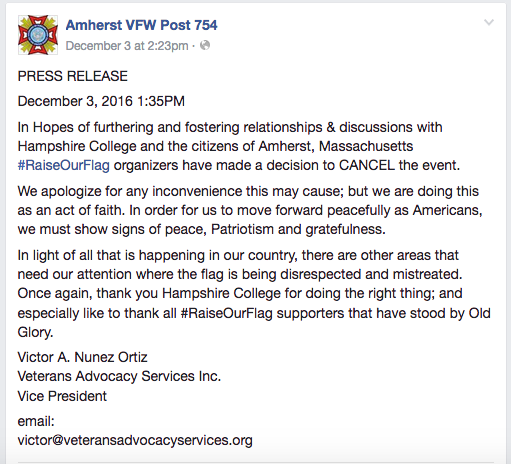 Indeed, the best outcome of this sorry mess would be a dialogue between veterans and campus community, and there are some signs that this may in fact occur.