From my father's World War II diary, written in Scotland: 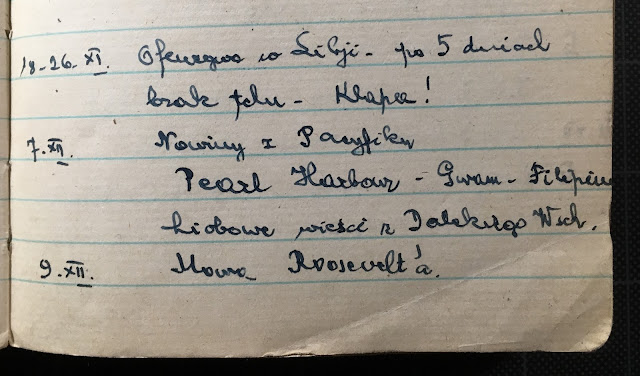 The reasons for the dating are unclear: The early morning attack on Pearl Harbor is listed under 7 December, as one would expect. Although the news appeared in The Scotsman and other papers on 8 December, the BBC announced it on radio on the day of the event. President Roosevelt delivered his "Infamy" speech to a joint session of Congress at 12:30 p.m. on 8 December, so the entry under 9 December (assuming it is not just a scribal error) may, given the time difference and schedule of the army day, reflect the fact that the diarist got the news from the papers rather than the wireless.

It certainly would have been grim news: Since the start of November, the British had lost the aircraft carrier "Ark Royal" and the battleship "Barnham." In Africa, the Nazis briefly crossed the Egyptian frontier, while in Europe, they advanced to the gates of Moscow (though the Soviets launched a counteroffensive on 5 December).

Grim news, to be sure, but in the long run a positive development to the extent that it finally brought the United States into the war and brought badly needed support to Britain on the western front.