The assassination of the Nazi “Reichsprotektor” of Bohemia and Moravia, Reinhard Heydrich, by Czechoslovak paratroopers on 27 May 1942 was an unprecedented blow against the Nazi regime. The commemoration of his death and the revenge were equally unprecedented. 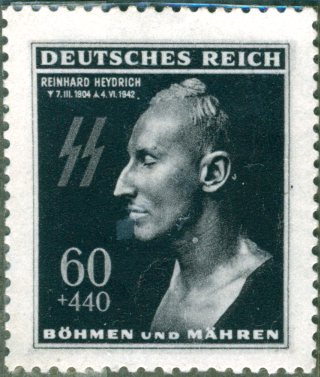 Heydrich succumbed to his wounds on 4 June. From 5 to 7 June, the coffin lay in state in the Hradčany castle, after which it was paraded through Prague and then sent by train to Berlin, where it was again ceremonially displayed. Himmler, who had been moved to tears at the news of the attack, delivered the eulogy at the funeral on the 9th. A shaken Hitler, who had considered Heydrich indispensable, posthumously bestowed upon him the highest German military decoration, the second and final such act in the course of the war.

That day witnessed the most infamous of the reprisals. Beginning on the night of 9-10 June, German forces wiped out the Czech village of Lidice, near Prague, which, they wrongly charged, had sheltered the parachutists. Of the 503 inhabitants, 173 adult males and several women were shot, and some 200 women were deported to concentration camps (143 survived). A handful of the nearly 100 children were given to “Aryan” families to be Germanized, and the rest were deported and later gassed at Chelmno (17 adoptees could be located by 1947). The entire town was then burned and obliterated, a process estimated to have consumed some 20,000 man-hours of labor by 100 workers, and lasting until July 3. 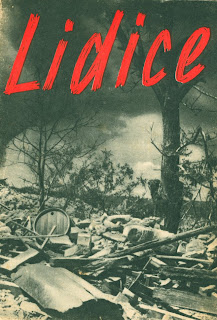 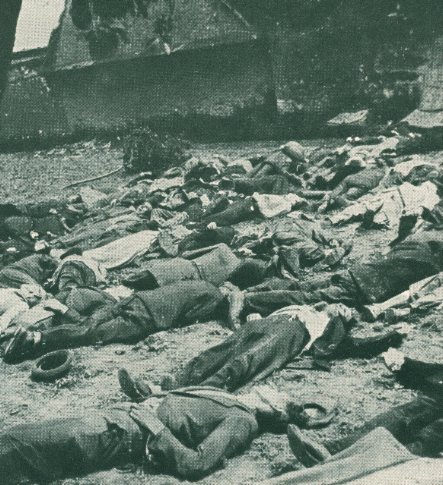 Rather than attempting to conceal the crime, as in the case of the extermination of the Jews, the Nazis brazenly publicized it as a warning. A detailed communiqué concluded,


Because the citizens of this community by their actions and support of the murderers of the SS Obergruppenführer Heydrich broke proclaimed laws in the grossest manner, the grown men were put to death by shooting, the women were transported into concentration camps, and the children were taken to be appropriately raised. The buildings in the village were razed to the ground and the name of the village erased.

Indeed, as I noted in last year’s brief post, the retaliation is, ironically, better known than the “crime” that ostensibly provoked it.

The reprisals had in fact begun almost immediately after the assassination attempt, as Heydrich fought for life in a Prague hospital. Berlin at first demanded the execution of all current Czech prisoners and the arrest of 10,000 more, but acting Protektor Hans Frank and his security staff argued that such a move would be counterproductive, the more so as they correctly surmised that the perpetrators were regular forces of the Czechoslovak government-in-exile rather than local resisters. The vengeance was nonetheless terrible. Already by the date of Heydrich’s death, there were 157 executions, targeting the nation’s elites and leadership.

Among the first to suffer were the Jews. Whether any of the Nazi leadership actually believed in a specifically Jewish role in the incident is in a sense irrelevant, for in their racial-political worldview, the Jewish conspiracy pulled the strings of the puppets in the great world theater and was ultimately responsible for every hostile action. Hundreds of Jewish prisoners in Sachsenhausen concentration camp near Berlin paid for this delusion with their lives in the immediate wake of the attack. Then, on 9 June, the date of the funeral and the assault on Lidice, 1000 Prague Jews were deported to the death camps in a train designated, “Assassination of Heydrich.” Two more deportations of equal size from the nearby Terezín ghetto followed in quick succession. The Nazis, who had begun the extermination of Jews in the “General Government” area of Poland in the fall of the preceding year, now christened the action, “Operation Reinhard” in honor of the SS martyr who had done so much to bring about the “Final Solution to the Jewish Question.” Historians refer to the three extermination centers (distinct from mere “concentration camps”) of Belzec, Sobibor, and the new Treblinka II facility as the “Operation Reinhard Camps.”

Leaving the deportations of the Jews aside, there were over 1,300 executions in the Protectorate between the attack and July 4. Other villages besides Lidice suffered. At Ležaký, on 24 June, all the adult males were executed. Retaliations continued into the fall. All told, former head of Czechoslovak military intelligence František Moravec estimated, some 5,000 of his compatriots died in the retributions. Although the death toll at Lidice pales in comparison to this total, the episode stood out as emblematic because of its sheer brutality and comprehensiveness.

It was a typical fault of the totalitarian Nazi regime to believe that one could not only rewrite but also erase history. Far from erasing the memory of Lidice, the terror immortalized it. Several towns in far-flung regions of the globe adopted its name in place of their own (ever wonder what a “Lidice” is doing in Illinois or Panama, of all places? it’s not French or Spanish), and others subsequently bestowed the name on streets, districts, parks, and organizations, so that it would never vanish.

The incident found its cultural resonance, too. The best-known tribute in the west was the book-length poem, “The Murder of Lidice,” by then-popular Edna St. Vincent Millay (1892-1950).

The poem also features prominently as a literary frame in Douglas Sirk’s moving but historically inaccurate “Hitler’s Madman” (1943), which imagines the assassination as having taken place in Lidice rather than Prague. As the men go to their death, they sing the Czech national anthem, after which a voiceover recites verses from the poem. Both poet and poem have largely faded from our collective cultural memory today.

The commemorations were musical as well as literary. Already in the summer of 1942 there appeared an album of “Songs of Lidice,” by soprano Jarmila Novotná, with an introduction by the Czechoslovak Minster of Foreign Affairs of the government-in-exile Jan Masaryk. The most enduring cultural tribute is, however, Bohuslav Martinů’s “Memorial to Lidice” (Památnik Lidicím) commissioned by the American League of Composers and completed in August 1943, and premiered by the New York Philharmonic on 28 October, the anniversary of Czechoslovak independence. Just under 8 minutes in length, the complex three-movement piece progresses from tragedy and loss to peace and optimism. The Adagio opens by juxtaposing C minor and C-sharp minor chords, and includes reference to the oft-cited historical “Saint Wenceslas Chorale” as national motif. The Andante develops this more confident mood of resistance and nascent optimism. The final Adagio culminates in a somber rendition of the “V-for victory”-motif, derived from the opening of Beethoven’s Symphony no. 5 in C minor, before resolving to a C major in the final half-minute.

One of the few surviving children sent for Germanization recalled,


The Czechoslovak authorities did not find me until 1947, and I went home nearly two years after the end of the war. Home, to my own country.

It was only then that they told me the Nazis had killed eighty of the children of Lidice. No more than a few survived. My fair hair and blue eyes had saved my life. And I had to begin learning to speak Czech again.

Here I heard that my father had been shot that first morning with all the men of Lidice. All that was left of our village was a flat place with thick grass growing over it. How sad it was looking at that plain. At one end there had been a school, then a little farther on the village square. And then the church and our houses. Everything had vanished.

Rebuilt a few hundred meters away from the original site after the war, Lidice today is both a living town and a memorial to the dead one, dedicated to the task of peace and reconciliation. A prominent feature is the vast rose garden of remembrance (1955 ff.), founded by British patrons, and containing contributions from some 30 countries.

At the dedication of the monument to the assassins of Heydrich last year, an interviewer spoke with Jiří Navrátil, a teenager during the occupation, and today, vice-chairman of the Czech Boy Scouts:


“Actually I think that it is the most important day, because all the world could see that the Czech people – in spite of all the old history – were against Nazism and would be free.”

But you paid a terrible price for killing Heydrich – the razing of Lidice and the thousands sent to concentration camps and so on. Was it worth it?

“Well, yes. That was war, you see. It’s necessary in war to fight.”

Terrific post; thanks. The wife and I just returned from Prague and rather than take photo of the phenomenal architecture, my pics are all of grim walls with faded fake flowers marking death, or reminders of a tragic century.
One of the highlights for me was eating at the restaurant 'U Parašutistů' beside the Ss Cyril and Methodious church. Stepping into it is like stepping into time as can be seen by the pics of its walls; how many other restaurants can one dine within surrounded Nazi orders, Waffen SS posters and leading Nazis saluting from within glass frames at you? Of course, the walls serve as a shrine to those who sacrificed everything for their country, their dead bodies dragged out into the street just outside. The inner walls serve as maps and mementoes reflecting the inexorable progress of the allies. The food is great too, and cheap!

Phenomenal article. The reality and facts are so horrific they have overpowering emotion. May this place be preserved for ever as a memory and as a reminder. Thank you.

Phenomenal article. The reality and facts are so horrific they have overpowering emotion. May this place be preserved for ever as a memory and as a reminder. Thank you.

I was given a 78 recording when I was twelve of a reading of The Murder of Lidice. Later my grandfather gave me a copy of The Rise and Fall of the Third Reich. I'm now seventy and still telling of the horrors of Nazism to my grandchildren. NEVER FORGET.