A Placeholder for an Absence: Amherst Town Manager John Musante, 1961-2015 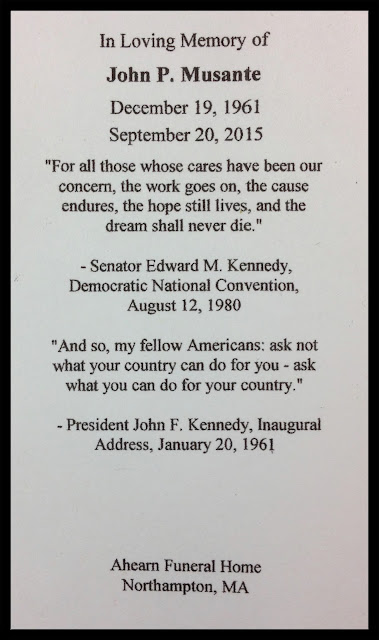 It shouldn't be news, but it is. Controversy over the special additional commemorative flags --for we always commemorate the anniversary of the September 11 attacks--ends as we now fly them annually from utility poles in downtown Amherst.

Tired of this controversy, glad it is over. Maybe I'll write about it, maybe not. 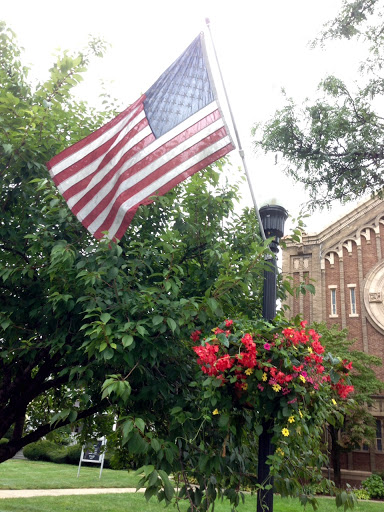 
Previous posts on this subject.

Since we have so many flag controversies here in Amherst, let me make clear that Hampshire College, like other major institutions in town, lowers the flag to half-staff on the anniversary of the September 11 attacks. 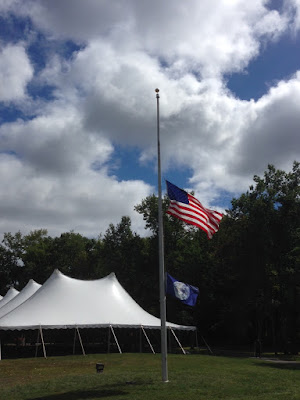 That said, the main commemorative event in recent years actually memorializes something totally different: what the organizers call "the other September 11," namely the coup that toppled the socialist regime of Salvador Allende in Chile on that date in 1971. 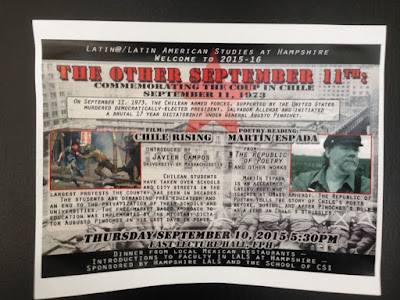 The organizers generally issue a disclaimer explaining that the purpose is not to minimize the tragedy of the September 11 attacks of 2001, although the juxtaposition certainly serves to contradict the simplistic notion of an "exceptionalist" United States as unalloyed force for good--and, on 9-11, innocent victim. In any case, on a practical level, the programs serve as a way of getting students interested in Latin American studies as the fall semester begins.

I mention all this because it underscores the fact that a given date is often the occasion for many anniversaries, which one momentous event tends to eclipse.

A few years ago, I posted a list of these other 9-11's, and they include some events that were arguably of equal or greater world-historical significance: from the victory of William Wallace at Stirling Bridge (1297), and the opening of the battle in which the Turks were stopped at the gates of Vienna (1683), to the British victory at Brandywine in the American Revolution (1777) and the American victory at Plattsburgh (Lake Champlain) over the British in the War of 1812 (1814).

How many do you recognize?
Posted by Jim Wald at 23:56 No comments:

Not the least of the many strengths of the National Museum of American History in Washington is that its scale allows it to house and display some immense objects from its collection of some three million items--from the Star Spangled Banner (originally 30 x 42 feet; now 30 x 34) to an entire Ipswich, Massachusetts house.

Another of the largest was just a temporary guest: the great garrison flag that hung from the façade of the Pentagon from September 12 to October 11, 2001. Fittingly, the installation was in Flag Hall, where the Star Spangled Banner was formerly displayed. 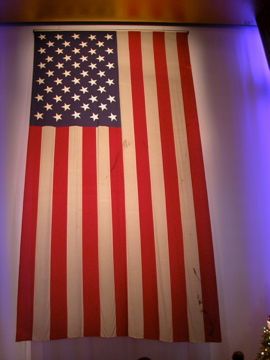 It was a striking sight whose power the photo can barely convey, though the visitor's head and top of the Christmas tree at lower right give you some sense of the scale.

It is now back home in storage at the U.S. Army Center of Military History at Fort McNair.