The medal below was issued by the city to the defenders. As historian and security expert John Schindler notes in a piece written on this week's centennial: because of the French system of rotating units in and out of Verdun, "virtually every division in the French army fought at Verdun at some point in 1916." 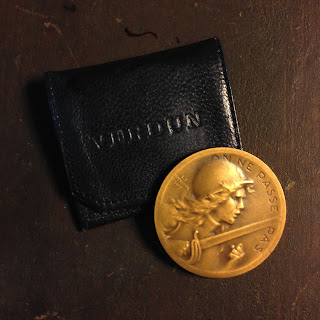 "The Butcher’s Bill of 1916: Europe’s Blood-Drenched Year of Horror:
A century ago, Europe was busy killing itself—a nightmare we still live with today," Observer, 17 Dec. 2016

John Schindler (@20committee) places the Battle of Verdun in the context of other bloody operations of 1916, including the Somme (intended to relieve the pressure on France arising from Verdun), and the lesser known battles in other theaters: Isonzo, on the Italian Alpine front, and Russia's Brusilov offensive against Austria-Hungary.