17 July 1793: Execution of Charlotte Corday for the Assassination of Jean-Paul Marat 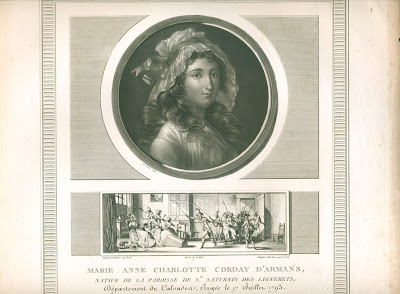 
On this day in 1793, the young Charlotte Corday, who had assassinated the radical French journalist and orator Jean-Paul Marat four days earlier, went to her death. Seized at the scene of the crime, she was sent to the Abbaye for trial and then, at the order of the National Convention, transferred to the Conciergerie to await her encounter with the guillotine.

Although the dead Marat became the object of an extensive cult among radical revolutionaries, Corday, too, developed a following, among adherents of moderate and royalist groupings.  She became the epitome of female virtue, though it was of a complex sort, uneasily posed between the more passive traditional role model of domesticity and the dangerous, unfeminine revolutionary harpy.  She herself carefully framed her own quest for martyrdom.  A descendant of the great dramatist Corneille—a major theme of whose oeuvre was the tragic conflict between duty and passion, invariably resolved in favor of the former (that's one reason they're tragedies)—she was raised on the reading of the classics, for she claimed to have been inspired by the twin ideals of Plutarch and the Bible. When her room in her hometown of Caen was searched after the crime, her Bible was found opened to the underlined account of Judith's assassination of the general Holofernes.  Her life was one of stoicism, in a female register, to be sure, mixing quiet strength with kindness..  The brief account of her life beneath the images by Levachez and Duplessis-Bertaux explains, "nourished by the reading of the ancient and modern philosophers, her taste for independence went so far as repeatedly refusing the homage of her suitors." When under arrest, noticing that someone was sketching her, she considerately turned toward him.  It was her empathy for the unfortunate and outrage at injustice, we are told, that moved her to violence.  She was impassive upon learning her sentence and at her execution. Still, in revolutionary France, even after the return to centrism had caused her victim to fall from favor, there was nonetheless a certain uneasiness about Corday and her actions. The commentary concluded didactically, "Her memory will pass into posterity like those of all the great guilty persons; because one can never excuse assassination, even that of Marat." (no doubt, music to the ears of any political regime)

Many portraits, especially, as the distance from the event increased, presented an ever more idealized image of an attractive and demure girl, not unlike what one expects of pictures of virtuous colonial maids in America (maybe there's even a resemblance to our image of our own Betsy Ross). Varying details in the description or portrayal of her appearance—particularly her coiffure and hair color—may represent, as Nina Rattner Gelbart has argued in a provocative and complex essay, different political interpretations of her persona as well as discrepancies in the eyewitness accounts themselves. 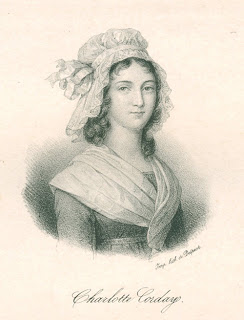 As it is easy to imagine, at the time of Marat's murder there was a huge, insatiable appetite, a deep desire, a veritable public need for images of Corday, for a likeness to attach to the dramatic story. . . . The engravers of the day, the closest thing to our paparazzi, scrambled to capture her likeness on paper and sell their wares."

What is certain is that we have an authentic image from the last days of her life.  Corday requested that a portrait of her be made for her friends, and the President of the Tribunal allowed Jean-Jacques Hauer, the man described in the aforementioned caption to the image by Levachez, to create it.  Hauer eventually made two authenticated surviving paintings. The first depicts her at the scene of the crime, wearing a tall hat. The second depicts her in her cell, wearing a simple mobcap that, we are told, she made there for herself. This latter painting would seem to have furnished the model for most of the standard images and their variants, such as the two above.

The former, or rather a detail of same, showing her with the dagger, but in somewhat altered stance and without Marat, was the subject of an engraving (below) announced already on 20 July. The subject of a detailed contract drawn up on the following day, it was advertised for sale a week later (delivery expected within the month) for the price of 5 livres, described as done in "the English style" (that is: the then-fashionable stippled manner) by "Tal" [sic; for Tassaert] under the direction of Anselin.

Citizen Hauer, painter, sketched, from nature, the portrait of Marie-Charlotte Corday. He was admitted to her presence in the interval between her sentencing and her execution. It was there that he perfected the drawing that he had made at the court session.  This portrait is in addition of the greatest possible resemblance and depicts perfectly the extraordinary calm that this woman did not fail to display in the most terrible of moments.

The second advertisement filled in the narrative background:

Citizen Hauer, painter, was noticed at the Tribunal by Charlotte de Corday, drawing her portrait; she asked him to come into the criminal chamber while she awaited the results of the deliberations. She asked to see the portrait, found it well executed and a good likeness, and offered to pose for him again while she was being sentenced.  He accepted with pleasure, and she posed with a tranquility and a cheerfulness that one can scarcely conceive.
The result is that this portrait is of a striking resemblance to all who have seen it. 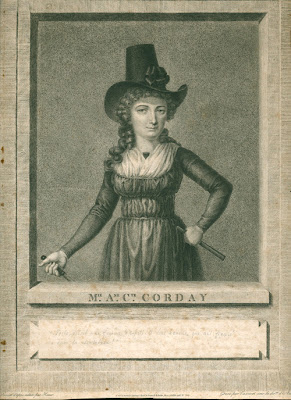 Already by the middle of the nineteenth century, the engraving was described as rare.

The famous photographer Henri Cartier-Bresson was a proud descendant of Corday's extended family on his maternal side.

It is perhaps even less well known that Winston Churchill took a particular interest in the figure of Corday. In July 1941, John Colville observed in his diary, "The PM said that one of the most striking things about this age was 'the lamentable lack of Charlotte Cordays.'"

In fact, Corday apparently became quite important to Churchill's worldview. According to one of my contacts, he kept Hauer's engraving on display in his home, so that, when dealing with Charles de Gaulle, he could point out what happened to arrogant Frenchmen who did not mend their ways.

Another nice example of the use or abuse of history (you can decide which is which).


For Cartier-Bresson, Corday was a heroine. Gelbart quotes him as saying,  "What a wonderful figure, what an admirable character!"

Personally, I find the verdict of "the Raging Reporter" Egon Erwin Kisch more congenial.  Introducing a piece by Marat in his anthology, Klassischer Journalismus (Berlin, 1923), he explains, "the agitated hysteric, Charlotte Corday, a stupid person, stabbed him to death."