The surprise attack by Nazi Germany on its erstwhile Soviet ally was fateful in numerous regards. It was the beginning of the full ideological and genocidal war against the twin enemies of Bolshevism and the "inferior" races of Slavs and Jews. As such, it was marked by deliberate disregard for even the minimal rules of warm, epitomized by the "Commissar Order" of 6 June, which mandated the summary execution of Soviet political officers.

As one commander explained to his troops, every officer was entitled to undertake executions on his own authority. The "decimation" and "burning down of villages as a punitive measure" were also among the acceptable actions, though these latter required clearance from a battalion commander.

Historian Felix Römer of Mainz published a new book on the Commissar Order last fall (here conveniently summarized in his article for Die Zeit) that detailed more clearly than ever just how extensive the crimes were and how cooperative (contrary to the apologetic myths) the regular army proved to be. Whereas traditional accounts claimed that many officers passively ignored or actively disobeyed the order, Römer finds hard proof that some 60 percent of officers promulgated it, and that, in all probability, fully 90 percent did so. Far from the few hundred cases once spoken of, Römer finds documentation for nearly 4000 executions of political officers and functionaries.

Horrible as this number is, it constitutes only an infinitesimal fraction of the 27 million Soviet dead between 1941 and 1945. The Commissar Order was the symbolic as well as practical trigger of what the German leaders promised would be a new way of warfare. It was moreover significant that the Nazis justified their policies as a response to what they characterized as the inhumanity of their Judeo-Bolshevik opponents, who would fight "with the most extreme cruelty and treachery." (Decades later, Ernst Nolte seemed to argue on similar grounds to excuse Nazi crimes as a preemptive defense against the genocidal policies that Germans could expect of the Bolsheviks.)

Enforcement of the order ceased only in 1942 when the generals, motivated by practical rather than ethical concerns, found that such ruthless methods (understandably enough) only increased Soviet resistance.

As the war began to turn in the Soviets' favor, they increased the efforts to persuade Wehrmacht troops to surrender rather than face certain death. One of the challenges that they faced was to assure the Germans that captivity was indeed the only hope of survival rather than just another path to death—in other words, that the Germans could expect to be better treated than they treated their Red Army captives.

A 1942 safe-passage leaflet contained rosy accounts of German POWs wearing swimming trunks in southern climes and happily cultivating vegetables. More important, it explicitly addressed German crimes, for in it, Wehrmacht POW's expressed their regret at having incinerated Soviet villages and described themselves as moved to tears that the Russians behaved so kindly "to us swine." 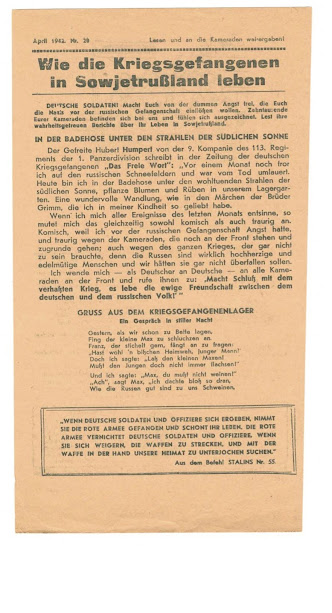 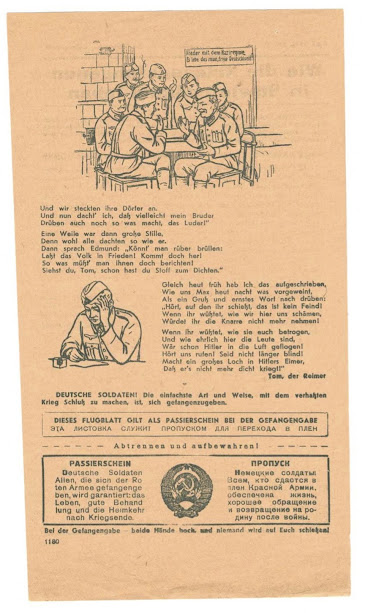 The bottom of the second page (above), contains a tear-off section intended to guarantee the bearer safe passage. It reads:


German soldiers who surrender to the Red Army are guaranteed: life, good treatment, and return home after the end of the war.

The line below assures Germans that if they surrender with hands raised, no one will shoot.

Although the Soviets, unlike the Germans, did not have a policy of deliberate extermination of prisoners, conditions for the average German POW bore little resemblance to what the pamphlet described, or certainly not for long. As the tide of war turned, the number of prisoners increased beyond the Soviet capacity to care for them, and the mounting toll from German atrocities did not make the USSR any more inclined to be lenient toward the captive invaders. Conditions improved only briefly late in the war, when the Soviets needed prisoners for labor, But as Max Arthur puts it, “In 1945, in Soviet eyes it was time to pay. For most Russian soldiers, any instinct for pity or mercy had died somewhere on a hundred battlefields between Moscow and Warsaw.” Death rates among POWs on both sides of the eastern front were around 60 percent. Among prisoners on both sides on the western front, by contrast, it was under 4 percent.

Getting back in the groove

For a variety of reasons, I decided not to attempt to maintain a regular posting schedule during our very full and successful study abroad course in Prague and Kraków from May through mid-June. Instead, it seemed simpler and wiser to digest some of the results of those travels and post them in the accustomed form here.
We did, however, create a course blog, on which some of the students posted during the trip, and we'll link to that later, as well.
In the meantime, it's an especially busy season because, after an unusual Town Meeting that was was divided between May and June, we can also look forward (a peculiar idiomatic phrase) to yet another Special Town Meeting in late July. The principal reason for the latter is the adoption of new local options taxes, which is dictated by the state calendar and new fiscal year. However, this year's May and June sessions provided some unexpected tensions--some of which bear, directly or indirectly, on historic preservation matters--which may not have subsided by then.
Keep posted.
Posted by Jim Wald at 23:33 No comments:

Boston, and Bunker Hill from the east, with Charlestown and the monument on the right: engraving by W. H. Barlett, from one of the many 19th-century editions of American Scenery

The 17th of June may be the former day of national unity in Germany, but the anniversary of a celebrated Revolutionary War battle has again emerged as a divisive date here in Massachusetts.


That some local and state employees have the day off irritates Republican lawmakers, who charge that legally mandated "hack holidays" such as Bunker Hill Day and Evacuation Day (March 17—yes, coincidentally, St. Patrick's Day) for the few constitute an insult to all the rest of us who have to work, and moreover result in great overtime costs and losses of productivity (though they produced no evidence to support this claim). Some Democrats responded by insisting on the historic importance of the Revolutionary holiday and drily noting that the Commonwealth might be better served if Republicans focused their energy on ethics reform and other more susbtantive matters.

Bunker Hill (actually Breed's Hill, as most of us know) was of course the first full-scale battle of the Revolution after the initial clashes at Lexington and Concord. Although the besieged British forces from Boston succeeded in taking the fortified height from the rebels, the fact that the latter had stood their ground through three assaults was a symbolic victory.

The huge granite obelisk (221 feet tall) that marks the site has a story of its own. After the legislature declined to fund the project, conceived for the fiftieth anniversary of the battle, it fell to citizens' volunteer groups—in particular, the women of the Ladies' Fair at Quincy Market—to raise the necessary funds (a process that, ironically, anticipated the struggle we here in Amherst faced in microcosm when we sought to create the now immensely popular history mural in West Cemetery). Although the laying of the cornerstone in 1825 was occasion for a huge festival, marked, inter alia, by the oration of Daniel Webster and the presence of the Marquis de Lafayette, then making his triumphal American return tour, the project was not completed till the formal dedication in 1843, marked by festivities almost as impressive. (MassMoments provides a nice synopsis.)

The story is told in capsule form on the commemorative cup plate produced by the prolific Boston and Sandwich Glass Company, the motto of which reads: 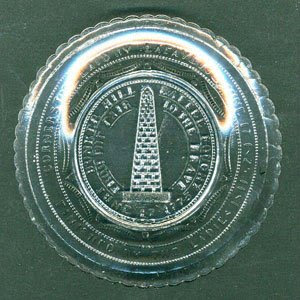 This was but one of a host of commemorative products that appeared in a steady stream for decades. The battle and site were memorialized in speeches, poems, prints (see above), and souvenir objects

It is ironic that Republicans and other right-wingers, who have appropriated the symbolism of the "Tea Party" as a protest against the policies of the Obama administration, show such little interest in the real history or principles of the Revolution from which they claim inspiration.

Democrats also pointed out that the anti-Bunker Hill Day argument was moot because the holidays were built into legally binding contracts and could not be changed in the immediate future anyway. In one further ironic development, we see more evidence of the growing tendency to blame workers and contracts for economic ills that are largely structural, and to take away the gains of decades of struggle and collective bargaining for the sake of short-term convenience. The disease has hit even "progressive" Amherst, in which an unholy alliance of soi-disant leftists and right-wing fiscal conservatives are united in crying that we must get rid of Cost-of-Living Allowances (COLAs) and other wage increases for town employees. All a sudden, those who resist many an eminently rational administrative measure are telling us that we must extract concessions from those on the town payroll, whether by coercion—there are ways to break contracts, they blithely assure us—or cooptation: please, call all your friends among the unions! one enthusiast implored at Town Meeting. For some reason, they see cutting services to fit budgetary constraints as a great evil, but find no such problem in cutting the pay of those who provide the services.
Posted by Jim Wald at 23:59 No comments:

The original Day of German Unity (Tag der deutschen Einheit) commemorates the disturbances of 17 June 1953, when workers in East Germany (German Democratic Republic) rebelled, first, nominally against increased labor requirements, and eventually or more generally, against the Stalinist system. The Volkspolizei and Soviet forces put down the demonstrations with force, and further repressions, ranging from jail terms to executions, followed.
The holiday, created in West Germany (the Federal Republic), served as a Cold War propaganda device and reminder that the West German constitution (Grundgesetz; Basic Law) was officially treated as a provisional document and provided for eventual reunification with Eastern German territories whenever circumstances allowed.
Today, the original holiday has receded from memory. Following the reunification of the German states in the wake of the collapse of communism, on 3 October 1990, that date replaced the earlier one as the day of commemoration--turned celebration.
Although the former soon came to serve mainly as a convenient holiday (in the sense of a day off from work) rather than a real occasion of historical significance in the popular mind, it is far from clear that the new date will fare much better. For most Germans and foreigners alike, the date of the "Fall of the Wall" on 9 November, which moreover coincides with a series of fateful anniversaries in German history--the November Revolution that overthrew the Kaiser in 1918, Hitler's failed coup attempt of 1923, and the Kristallnacht pogrom of 1938--remains a much more memorable occasion than 3 October. Governments can proclaim historical holidays, but the people themselves create them.
Posted by Jim Wald at 23:59 No comments: