The Amherst Local Historic District Study Committee convened again on 8 September for a walking tour of the existing Dickinson National Historic Register District, which is the putative core area of the proposed local historic district. 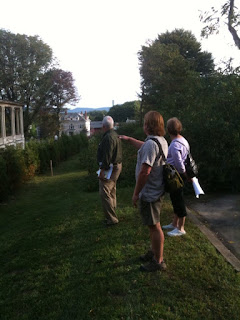 Here, Committee members standing between the two Hills Mansions: the Leonard Hills House (now the Amherst Woman's Club; 35 Triangle Street), to the right, and the house of his son, the Henry F. Hills House (former Amherst Boys and Girls Club; 360 Main Street) on the left. Committee Chair Jerry Guidera (foreground), current owner of the Henry Hills House, points out the view from the two mansions across Main Street. At one time, Messrs. Hills, father and son, could look down (literally and figuratively) on their factories and workers below, with a view of the Holyoke Range in the background. In the mid-ground today: the Colonial Revival Baxter Marsh house (c. 1896-97), former home of the Amherst Record. Robert Frost had also lived there for a time. Formerly located at 109 Main Street, the house was moved to its current location at 401 Main St. to make room for the new Police Station in 1989. The current owner is architect Bill Gillen, another member of the Committee.

Now that the Committee has selected the existing Dickinson National Historic Register District as the point of departure for its work, the next step will be to determine what additional properties would be appropriate for inclusion in a local historic district. The practical task is thus to compile an inventory of historic resources in adjoining areas, which will move to the top of our agenda in October.

Preparation for the 250th Anniversary Parade 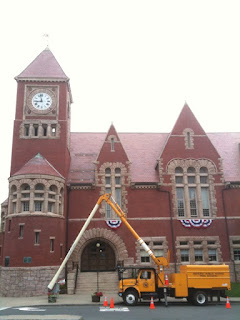 Labor Day . . . and who was talking about the labor movement?

In part because I have just been reading Andrei Markovits's hard-hitting but judicious Uncouth Nation: Why Europe Dislikes America, I am appropriately wary of making invidious comparisons between the continent and our compatriots, and yet the temptation remains.
Namely, I have been struck by the fact that, on Labor Day, we here do so little to commemorate labor and the labor movement—an omission all the more glaring and serious given that the public is so ignorant of this history. In an age of deindustrialization, when union membership has declined and supposedly serious commentators are allowed to characterize even the most timid public health care proposals as "socialism," perhaps it should be not surprising that many people dismiss unions and labor movements in general as yet another "special interest."
To be sure, we find the inevitable newspaper articles and television programs about the "state of the economy" and the like, but these treat labor only in passing and never deal with history in any serious way. And what did History (formerly: History Channel) offer us: not even a shallow or sentimentalized treatment, and instead sensationalism and superstition: "Gangland," "Manson," Nostradamus and Edgar Cayce. Of course, what can one expect of an organization that now considers "Ice Road Truckers" and pawnshop owners to be denizens of Clio's domain? But PBS was little better: "Antiques Roadshow" and "Wild Rivers." More serious, but not much better.
Ignorance may be an excuse, and it's the easiest one in the world because even those allegedly arch-liberal and leftist mainstream media are doing nothing to correct it.
Would it help to have a program or two about immigrant sweatshop workers? the history of the AFL-CIO? the Wobblies, or just the history of the holiday and the story of why Americans dedicate a day to labor in September, whereas most other developed countries do so on May 1? It couldn't hurt. Regardless of where they, as individuals, stand politically, Americans as a whole might just benefit from learning about the conflicts and accomplishments of the past. And then, rather than engaging in food fights about "socialism," they might talk in a more civil and nuanced way about the issues confronting us in the present and the future.
Posted by Jim Wald at 23:29 No comments:

One doesn't wish to be too harsh, but one can't help feeling a certain sense of parochialism here. The Seventieth anniversary of the outbreak of World War II does not seem to be generating the sort of coverage I would have expected or hoped for in the US. To be sure, there was the occasional piece, but the date is just not part of our collective consciousness in the way that it is part of the European one. By and large, we tend to think of the War as beginning when it began for us in 1941. Let us see what 2011 brings.
From among the various publications and postings, let me call attention to this one by Barry Rubin, who takes time out from his endless commentary on the Middle East to turn to the European past. Writing on the anniversary of the Nazi-Soviet non-aggression pact, he reminds us that World II began not only with a German attack on Poland from the west, but also with a Soviet attack from the east, supposedly in order to ensure order. (I wonder how many of my students know that—before I tell them, of course).
Rubin's aim is both to correct the popular historical view and to argue that the Russians are continuing a historically aggressive policy under a new government and a new guise:

Stalin says that the Germans desire peace and he offers a toast: “I know how much the German nation loves its Fuhrer; I should therefore like to drink to his health.” As the German foreign minister leaves, Stalin has some words of special importance for him: “The Soviet government takes the new pact very seriously. I guarantee on my word of honor that the Soviet Union would not betray its partner.” It was one of the few promises Stalin didn’t break. It was one of the many promises that Hitler did.

Today, 70 years later, the Russian government is trying to justify this terrible deed. Says military analyst Pavel Felgenhauer, "This is not about history at all."

In effect, the Russian government is asserting its sphere of influence over all these and other independent states. The implications are frightening, most directly for Poles, Latvians, Lithuanians, Estonians, and others in Central Europe but also for Georgia and Azerbaijan, and for anyone who treasures liberty.

Russia has been putting increasing pressure on its neighbors, sometimes using its energy exports for blackmail, sometimes using money or covert operations. One remembers what the American diplomatist George F. Kennan wrote at the onset of the Cold War: To be Russia's neighbor means either to submit or to be considered an enemy.

The basic Russian historical claim about 1939 is that by itself seizing these territories, the USSR prevented Germany from using them as a staging ground for an attack. In addition, efforts to work out a security alliance with Britain and France had failed.

This is profoundly misleading. The Soviets genuinely saw Nazi Germany as an ally. They helped the German army train, they sold it materials to build up its military, and even up to the moment the Germans attacked in 1941, Stalin insisted that Hitler would not betray him. Indeed, he ordered punishment for any Soviet agents who sent warnings of an imminent attack.

It may be even more complicated. The New York Times reports, "Russian Premier Calls Nazi-Soviet Pact Immoral." But Mr. Putin did so mainly by saying that other countries were just as bad: blaming the British and French for their earlier appeasement, and Poland for profiting from it:

The prime minister released his historical interpretation just before a scheduled visit to Poland on Tuesday for a commemoration of the start of World War II, 70 years ago this week.

The pact — which was followed by German and Soviet invasions of Poland — remains a source of anger there, and the article heightened expectations of what Mr. Putin would say during his visit.

Ria Novosti, an official Russian news agency, reported that Mr. Putin would use the trip to counter what the Russians call efforts by Eastern Europeans to recast the causes and lessons of World War II. Russia looks upon the war as a searing event in its history, one in which, by some estimates, 25 million Soviet citizens died.
. . . .
In his article, Mr. Putin wrote that he was compelled to discuss the pact, named Molotov-Ribbentrop for the Soviet and Nazi foreign ministers who negotiated the accord, because it was being cited today by countries who have traced their postwar Soviet occupation to this agreement.

“It is indicative that history is often slanted by those who actually apply double standards in modern politics,” he wrote.

The article, published in the Polish newspaper Gazeta Wyborcza and posted in Russian on the Russian government Web site, did not backtrack on earlier Russian condemnations of the pact or apologies for the subsequent massacre of Polish officers at Katyn Forest.

But it did highlight a theme that has played on Russian state television in recent weeks: that even Poland was complicit in making deals with the Nazis. The article notes that the Polish Army occupied two provinces of Czechoslovakia at the same time the German Army invaded that country following the Munich agreement with France and Britain in 1938.

Mr. Putin argues that the Molotov-Ribbentrop pact was inevitable after the Western Allies had acceded to the invasion of Czechoslovakia.

He called that an effort by the West to “ ‘buy off’ Hitler and redirect his aggression to the east.”

Stalin’s government, Mr. Putin wrote, was impelled to sign the agreement because it was facing aggression in the east from Japan and did not want war on two fronts.

Mr. Putin did not mention that the Nazi-Soviet pact also restored a portion of the Russian empire lost after World War I and coveted by Stalin. (read the rest)

An interesting spectacle: military maneuvering, betrayals, opportunism, and aggression then, and their political equivalents today. Welcome to my world. In East Central Europe, nothing historical is forgotten (though it is often deliberately suppressed), everything has public symbolism or a hidden meaning (lying silent but threatening like a land mine). History there is never really dead; it just keeps resurfacing in new ways.
Posted by Jim Wald at 23:57 No comments: