Many of us have childhood memories of staying up all night to watch the first moon landing, excited that we were able to witness history being made. 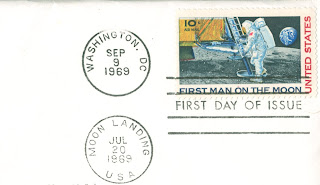 The word, "bittersweet," however, seems an appropriate one to characterize the end of the space shuttle program, which coincides with the anniversary of the first Apollo moon landing in 1969. It is sad that it in one way marks the close (for the foreseeable future) of our "manned space program" and, in another, reminds us of its mindless perpetuation: science on autopilot.

The other day, as I watched a grim debt-ceiling countdown clock ticking down on CNN, I was reminded of an earlier age and earlier countdown clocks:  when we were kids and there were only three networks, every manned space launch was a big deal. In fact, I recall days on which the teachers would wheel a television (black and white, of course) on a tall metal cart into the classroom so that we could watch the blastoff. And when a giant Saturn rocket was being wheeled out to the launch pad readied for a moon launch, the nightly news reports might show a clock that, like the current one, measured a week or days rather than minutes and seconds.


The space shuttle should have been the next great adventure. Indeed, all of us who were enthralled by Stanley Kubrick's "2001: A Space Odyssey" hoped to see the promise of routine NASA trips to and from a space station, even if not quite the regular PanAm space station commuter flights so (now it seems) naïvely depicted at the iconic beginning of that classic film. Like many a boy, I was excited by the idea of a reusable space vehicle, and so I built and repeatedly launched the Estes "Orbital Transport" model rocket (1, 2).

In fact, I came across the old model when cleaning out my old things at my mother's house some years ago. 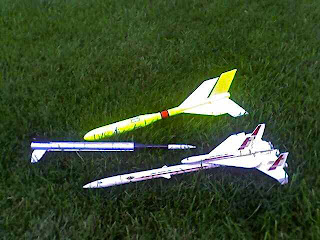 It turned out even the grown-ups were naïve. Pan Am, unable to make it even here in earth atmospere, went out of business in 1991, exactly ten years before 2001. And in 2011, ten years after 2001, the "space station" is a glorified collection of tin cans rather than the huge and luxurious rotating city that we once imagined.

The manned space program was one of the glories of human endeavor, and yet, in our day, it also reminds us of the limitations of human judgment and government policy. One doesn't have to be a total opponent of the endeavor to acknowledge that it at times substituted symbolism for substance and persistence for purpose. Clearly, it was essential to learn how to transport humans safely to and from near and outer space, and the sheer heroism of the early effort was transfixing. Still, critics compellingly argue, manned exploration and manned space flight in general tended, over time, to become ends in themselves, increasingly unable to justify the means.

As impressive as they were, the shuttle missions embodied this dilemma. The scientific and technological results barely if at all justified the cost in dollars—and, in the long run, human lives. The only American fatalities associated with the ambitious, fast-paced, and heroic race to the moon occurred on the ground, in the Apollo 1 fire that killed astronauts Grissom, White, and Chaffee on the launchpad in 1967. The Soviets lost four cosmonauts on the ground and in the air. By contrast, we lost two full shuttle crews—14 human lives—in the course of what should have been routine service and scientific missions. That's something to think about.

I still remember very clearly where I was on the occasion of the two shuttle tragedies. On the day of the "Challenger" launch, I happened to be at my apartment in the morning because someone was coming over to see me on business.  When he left, I turned on the tv to check the news before going to the library—just in time for the launch. On the second occasion, I was watching what I expected would be a normal broadcast of a shuttle landing (I found it hard to resist any detailed coverage of the missions) on a lazy Saturday morning when the reports suddenly suggested that something was wrong and the "Columbia" vehicle had disappeared. Although the destruction of the "Challenger" became one of those emblematic moments "when everyone knew where they were when they heard the news," the less famous loss of the "Columbia stuck with me for a different reason. I was teaching a new Holocaust class as a guest professor at nearby Mount Holyoke College, and the first Israeli astronaut, Ilan Ramon, the son of Auschwitz Holocaust survivors, had taken with him on the shuttle a reproduction of drawing by a child from the Terezín ghetto in the former Czechoslovakia. The image, by young Petr Ginz, depicted our planet as seen from a lunar landscape and, according to Yad Vashem, the Israel Holocaust memorial from whose collections it came, "attests to his aspiration to reach a place from where the earth, which threatened his life, could be seen from a secure range." I had planned to talk about it in class that week, as an example of both the particular and universal meaning of the Holocaust. Petr Ginz was gassed in Auschwitz in 1944, at the age of 16. As fate would have it, the "Columbia" burned up on the 75th anniversary of his birth.

Two catastrophic failures of shuttle vehicles in missions that should have been as routine as Kubrick's Pan Am flights brought home the tragic irony. The problem was that the shuttle was intended to be cheap, simple, and safe: It proved to be none of those. 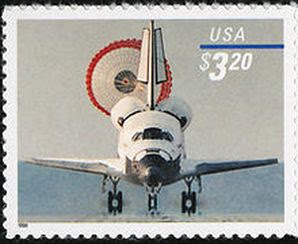 Physicist Bob Park of the University of Maryland has been one of the harshest and loneliest critics of the manned space flight program, but the end of the shuttle missions provided a larger opportunity for retrospection and a platform for others likewise seeking to inject a critical (or at least analytical) perspective into a discourse too often reduced to either the triumphalist or the elegiacal.

As John Logsdon argued at the beginning of the month:


Forty years ago, I wrote an article for Technology Review titled "Shall We Build the Space Shuttle?" Now, with the 135th and final flight of the shuttle at hand, and the benefit of hindsight, it seems appropriate to ask a slightly different question—"Should We Have Built the Space Shuttle?"

After the very expensive Apollo effort, a low-cost space transportation system for both humans and cargo was seen as key to the future of the U.S. space program in the 1980s and beyond. So developing some form of new space launch system made sense as the major NASA effort for the 1970s, presuming the United States was committed to continuing space leadership. But it was probably a mistake to develop this particular space shuttle design, and then to build the future U.S. space program around it.

As he goes on to argue, the space shuttle became almost inextricably linked to the hard-to-justify space station. Operating costs were 20 times higher than projected, and because the vehicle was projected to be used for only 10-15 years but remained in service for 30, "NASA compounded the original mistake of developing the most ambitious version of the vehicle," the cost hampering the development of other projects.


I have previously written that it was a policy mistake to choose the space shuttle as the centerpiece of the nation's post-Apollo space effort without agreeing on its goals (Science, May 30, 1986).

Today we are in danger of repeating that mistake, given Congressional and industry pressure to move rapidly to the development of a heavy lift launch vehicle without a clear sense of how that vehicle will be used. Important factors in the decision to move forward with the shuttle were the desire to preserve Apollo-era NASA and contractor jobs, and the political impact of program approval on the 1972 presidential election. Similar pressures are influential today. If we learn anything from the space shuttle experience, it should be that making choices with multidecade consequences on such short-term considerations is poor public policy

Think about that next time politicians of either party wax enthusiastic about manned missions to Mars and the like. The world of interplanetary exploration remains as enticing as ever, but we ourselves may not need to be there every time, at least not just yet. 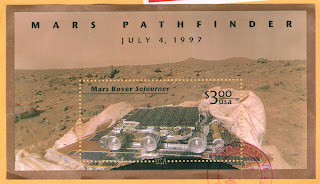 Still, it was a great ride. National Geographic offers "The Most Unforgettable Space Shuttle Photos" and Scientific American provides an overview of all 135 shuttle missions, spanning 30 years, in this 8-minute video:

The anniversary brought a whole crop of textual and visual retrospectives on the shuttle and the space program as a whole. A sampling:

• Tariq Malik, writing in Scientific American, provides an upbeat survey of the program in statistics rather than pictures ("NASA's Space Shuttle by the Numbers: 30 Years of a Spaceflight Icon"), while Logsdon asks, "As Atlantis Glides to Its Final Landing, What Comes Next?"
• Imperial College, London: four interviews on "the end of the shuttle era": Andre Balogh, Jonathan Eastwood, Tim Horbury, Nicholas Warner
•Caleb Scharf, "O NASA! My NASA!" (Scientific American blogs, 21 July)
• Scientific American offers a host of reporting and commentary under the rubric, "The End of the Space Shuttle Program."

Last year's post mainly points to the fortieth-anniversary post in 2009, which includes a hilarious appearance by Bob Park (highlight: discussion of a balky space toilet) on the Colbert Report, as well as Wallace and Gromit.

Nature magazine, too, now offers a collection of coverage on the history and legacy of the shuttle program