As I recently noted, a group of Amherst residents is suing the town's elected leadership and several top administrators: specifically, the Select Board, which functions as a collective executive; the Town Manager, who is the chief administrator; and the Comptroller and Clerk.

The Select Board and Town Manager strongly supported a proposal to create a large solar array on a closed landfill, seeing it as a major step toward sustainability and environmental responsibility, as well as a major source of revenue.  The measure also won overwhelming support from Annual Town Meeting. However, some residents in the vicinity of the proposed project vehemently opposed it on a variety of grounds, and have chosen to sue the Town in an attempt to block it.

The formal document indicating that I had been charged in the suit arrived while I was teaching in the Czech Republic.  A friend said she had visions of paper-servers chasing me around Prague, as in some thriller film.  It sounds, though, as if even in Amherst, little effort was made to effect personal delivery. As in the case of some other defendants, the documents were just rubberbanded to the handle of a storm door. Not exactly "The Bourne Identity." 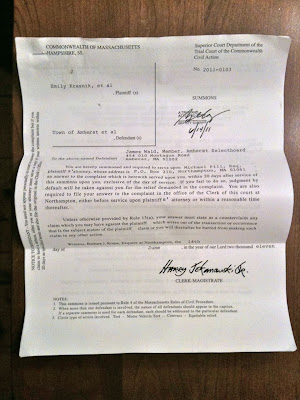 The Town has now issued a formal response to the suit. Diane Lederman of the Republican reports here.


[updated with links and image]