On July 21, the "Charles W. Morgan," America's last surviving wooden whaling ship, turned 170.  This year is also the 70th anniversary of her arrival at the present home in Mystic Seaport, Connecticut. Staff and visitors marked the occasion with flowers, cannon, and cake.

Here is video from last year's celebration.  Further videos from Mystic describe her history and the three-year restoration work, still underway but scheduled to be completed by 2013.

The "Morgan" was one of the first American ships to be designated a National Historic Landmark, in 1966. (The USS Constitution was the first, in 1961.) Here she is depicted on one of four postage stamps honoring historic preservation (1971). 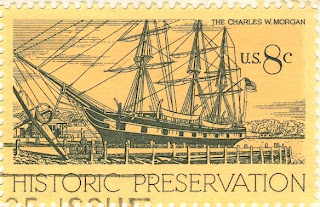 The wooden whaling ships were technological wonders of the day, and it is interesting to compare the fate of the "Morgan" with that of the space shuttle, discussed in the previous post. In one obvious sense, they are of course not comparable: the shuttle was a highly specialized machine manufactured for a need of a very particular moment as part of a very small "fleet," and modern high technology changes at a much faster rate than did traditional technologies. Still, even taking that into account, the "Morgan" does pretty well. The bark was launched in 1841 and remained in service until 1921. That is, it was fully functioning and able to carry out its mission for 80 years, even well after steam had eclipsed sail in most domains. By contrast, the space shuttle, which was intended to be a cost-saving vehicle in service for a limited period, was never efficient or fully reliable and became hugely expensive, a problem exacerbated by the fact that it was kept in service far longer than anticipated. Many scientists would say that the continuing reliance on the shuttle—both because of what it was and because of the resultant failure to develop either an alternative or a successor—was a major mistake.

Of course some mistakes can be unexpectedly productive. I remember very clearly my first visit to Mystic and the "Morgan" because, even though I was only a small child at the time, it became a part of family lore. We had driven from the Midwest to the East Coast and were traveling from New York to New Hampshire to visit relatives.  I assume that we were heading north on I-95, intending to veer northwest on 395 to I-93. My mother was driving and my father was navigating. Apparently, we kept going east on 95. After a while, my mother began to wonder whether we were in fact on the correct road. Finally she asked, "Are there supposed to be submarines over there?" We had ended up on the Atlantic at New London. At any rate, we soon discovered that we were near Mystic Seaport, which we had read about with great interest but never had a chance to visit. No time like the present. We decided to make the best of our mistake by making a day of it. I don't remember what we had for (a very late) supper when we finally got to New Hampshire. I'll never forget my first day in Mystic.

My father never liked to admit that he made mistakes. In any case, he said, he had little practice at it because error was such a rare occurrence for him. Perhaps for that reason, we never let him forget this one. Still, he had a sense of humor about the whole thing. As he would say, "I almost never make a mistake, but when I do, it's a doozy." Throughout the following years, he liked to refer to this little navigation error as "the best mistake I ever made."  We always agreed. Thanks, Dad.