It's "Bastille Day," or simply the 14th of July, as the French call their national holiday, marking the anniversary of what is generally taken as the start of the great Revolution.

Popular historian David McCullough has a piece for the occasion in today's New York Times. He begins by noting that the recent arrest of Dominique Strauss-Kahn on charges of rape "has caused some people to question the American-French relationship." Really? Not clear which people he means: the Americans? the French? both? I would have said that many Americans already had a sort of love-hate relationship with France and the French. Well, actually more hate. Just think of the populist tendency to decry things French as elitist or effete (where else would fluency in this world language be considered a drawback for a politician?), the jokes about French military prowess, and the like.  Still, DSK is just the lead-in to a very valid point that he wishes to make:


Though we will probably never see a Bastille Day when French flags fly along Main Street and strains of “La Marseillaise” fill the airwaves, July 14 would not go so largely unobserved here were we better served by memory. For the ties that bind America and France are more important and infinitely more interesting than most of us know.

He details the many reasons: crucial French help in the Revolutionary war, the influence of early French missionaries, voyageurs, and settlers, still marked by numerous place names (I grew up with and learned about them in the Midwest), the 9 million Americans of French descent, the students who learn French, our love of French food and fashion, the influence of France on our great artists, the welcoming role that France played for African-Americans when their own country was less hospitable, and of course the American soldiers who served in and for France, some of whom remain buried there.

Actually, there was a time when French flags flew in America on July 14, and that was precisely what I had planned to write about for this year's entry, so finding McCullough's essay today was serendipitous.

After the United States entered the First World War, there was a wave of Francophilia and sharing in the spirit of French patriotism.


TRIBUTE TO FRANCE VOTED IN THE SENATE; House expected to Concur Today in Resolution PraisingLong Battle for Freedom.PROCLAMATION BY HYLAN All Citizens Called Upon to Celebrate Bastile Day and Flythe French Colors. Proclamation by the Mayor. Flags to be Presented

While the moverment for the celebration in this country tomorrow of the anniversary of the fall of the Bastile, the national holiday of France, was started by an informal committee, the celebration is contantly receiving greater and greater assistance from official sources. (read the rest)

There were regional commemorations, too. In Philadelphia, Emerson Collins (1860-1933), who held the office of Deputy Attorney General of Pennsylvania (1915-23), played a leading role. He was known as a great orator, and was evidently a colorful character, as well (we are told that, whenever driving past a particularly stately mountain, "he stopped the car, got out and then declaimed, with appropriate gestures, the poem beginning: “Ye crags and peaks, we’re with you once again. . .”). Collins, the descendant of a Revolutionary War soldier, was passionately dedicated to the history of the United States, which caused him to appreciate that of France, as well. 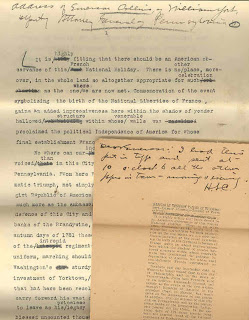 
It is highly fitting that there should be an American celebration of this French national holiday.  There is no other place, moreover, in the whole land so altogether appropriate for such celebration as the one where we are now met. Commemoration of the event symbolizing the birth of the National Liberties of France, gains an added impressiveness here within the shadow of yonder hallowed structure within whose venerable walls was proclaimed the political Independence of America for whose establishment France contributed so much . . . .

To return to today: McCullough concludes,


Though I love France and greatly value the friends I have made there, I am not an overboard Francophile. But as an American I think it is well past time to get back to respect and affection between our countries, on all fronts and with all possible good will.

For my part this Bastille Day, I intend to raise a glass or two of Veuve Clicquot in a heartfelt toast: “Vive la France!”

I'm probably a bit more of a Francophile than he is, and today, I happen to be in Washington, another city associated with our shared history of what R. R. Palmer called the Atlantic Revolution. I'm here for the annual conference of the Society for the History of Authorship, Reading, and Publishing (SHARP), the leading international organization dedicated to the study of all aspects of the culture of the book. I doubt I'll be drinking fine French champagne (though I don't know precisely what will be served at the opening reception tonight). I may just have a customary Samuel Adams, which celebrates another revolutionary. As Pauline Maier reminds us: in France, it was he, rather than John—sent to Paris to seek French aid for the rebellious colonists—who was known as "the famous Adams."

Oh: McCullough mentioned the Marseillaise, and if you'd like to see a joint Franco-American celebration of freedom involving that song, well, then, it's hard to do better than this.

The Library of Congress (where SHARP will be meeting tomorrow) does a characteristically thorough job of digging up unusual resources for the day from its extensive holdings:

• "a hand-colored etching "Vue brillante de l'aniversaire du 14 juillet 1801, which shows a crowd viewing fireworks at a Bastille Day celebration in Paris. Notice also that a balloon appears in the upper right corner. This print is but one of approximately 975 items comprising the Tissandier Collection which documents the early history of aeronautics with an emphasis on balloon flight in France and other European countries. Vive la France!"

pageantry and pomp? not so much in DC (though there were plenty of events, as a quick web search will show):
"Bastille Day: In Washington, it's not wasted on the French" TBD, 18 July