Most of us have seen the film, "Glory," depicting the heroic story of the African-American soldiers of the Massachusetts 54th Infantry in the American Civil War. It was on July 18 that the fateful nocturnal assault on Fort Wagner (Battery Wagner) outside Charleston took place. 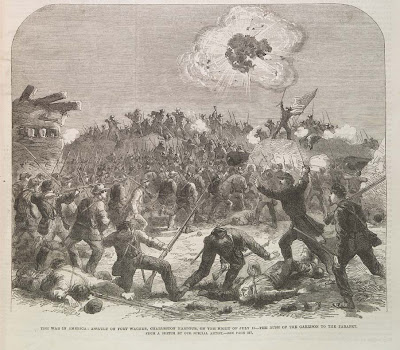 Far fewer of us are aware that African-Americans from Amherst fought in the 54th and in the 5th Cavalry. For that matter, most of us know very little about the history of the Black community in this town. That has been changing for the better in recent years, and the Civil War anniversary promises to bring still further progress.

Most recently, a minor confusion about the honoring of our African-American Civil War graves in West Cemetery brought some salutary attention to the issue as well as the Town's larger plans for the historic site. A formal ceremony honoring these soldiers and their service will take place on September 18 (see the calendar, above).

Last week, it was my turn to make the opening remarks at the meeting of the Amherst Club. The custom has been to read a poem or recount a bit of the town's history. As I was asked to do the latter, I chose something not from the town, but from Massachusetts history with a connection to the town. After noting the role of Amherst's African-American soldiers, I read a letter from another member of the 54th, James Henry Gooding, of New Bedford. Writing from Morris Island, South Carolina, on 28 September 1863, he asked President Lincoln to redress an injustice and provide Black soldiers with the same pay as whites received (the policy was finally corrected in 1864).

It is a marvelously eloquent and revealing document. In this passage, he refers to the sacrifices of the unit in the battle for Fort Wagner:


Today, the Anglo Saxon Mother, Wife, or Sister, are not alone, in tears for departed Sons, Husbands, and Brothers. The patient Trusting Decendants of Africs Clime, have dyed the ground with blood, in defense of the Union, and Democracy. Men too your Excellency, who know in a measure, the cruelties of the Iron heel of oppression, which in years gone by, the very Power, their blood is now being spilled to maintain, ever ground them to the dust. But When the war trumpet sounded o'er the land, when men knew not the Friend from the Traitor, the Black man laid his life at the Altar of the Nation, -and he was refused. When the arms of the Union, were beaten, in the first year of the War, And the Executive called more food. for its ravaging maw, again the black man begged, the privelege of Aiding his Country in her need, to be again refused, And now, he is in the War: and how has he conducted himself? Let their dusky forms, rise up, out the mires of James Island, and give the answer. Let the rich mould around Wagners parapets be upturned, and there will be found an Eloquent answer. Obedient and patient, and Solid as a wall are they. all we lack, is a paler hue, and a better acquaintance with the Alphabet. Now Your Excellency, We have done a Soldiers Duty. Why cant we have a Soldiers pay?

(The full text is available here.)

The University of Massachusetts Press has published Gooding's collected letters in an edition by Virginia Adams as On the Altar of Freedom: A Black Soldier's Civil War Letters From the Front (1991). The New York Times named the volume a Notable Book of the Year.

Check these pages in the coming months for further stories on Amherst's African-American community and the Civil War.