On 5 July, 1415, the Council of Constance (Konstanz) condemned the Bohemian religious reformer and past rector of Prague University, Jan Hus, to death for heresy. On 6 July, refusing to recant, he went to the stake. (Here, his final declaration.)

A follower of John Wyclif, Hus had challenged both papal authority and traditional doctrine, calling for more democracy in the Church, questioning the existence of Purgatory, and condemning priestly abuses and sale of indulgences alike. In part because of the emphasis on preaching in the vernacular, Hus also took up the reform of the Czech language and was responsible for the introduction of modern diacritical marks.

In the years after Hus's death, his followers' continued quest for reform led to open and successful revolt against the Papacy and Empire. Hus came to be seen—condemned by some, claimed by others—as a forerunner of the Reformation. Luther claimed to walk in Hus's footsteps. By contrast, the entry in the 1556 edition of Sebastian Münster's Cosmography portrays Hus as intelligent and eloquent ("Er het ein scharpffe vernunfft vn[d] wz wol beredt") but a divisive figure, whose preaching to the common people against the Papacy and monks sowed dissension ("vil zwytracht") and heresy ("eytel ketzerey") in the land: 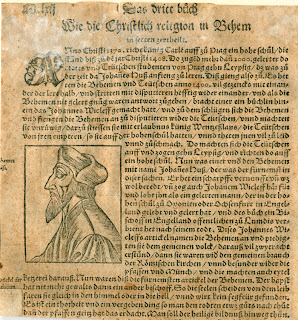 For Czechs in the modern era, he also became the founder or at least symbol of a national movement. Generally speaking, the Czech nationalists came to celebrate Hus and the Hussites in both national and universal terms, seeing in them moral exemplars whose ideals the nation sought to embody.

Tomáš Garrigue Masaryk, then a parliamentarian in the Austro-Hungarian empire and not yet the head or even advocate of an independent Czech state, was typical in that regard. Interestingly, he also likened the popular oral culture of the late medieval period to the press of the modern era. Today, the analogy would be to the blogosphere and social media. Speaking at a commemorative event in 1910, he urged listeners:


Let us recall that Hus and his forerunners began as moral reformers. . . .In Prague, the predecessors of Hus delivered moralistic sermons from the pulpits. In those days, pulpits played the role of today's newspapers and books in disseminating ideas. The sermons were directed at the improvement of morality in the towns and at the reformation of the wealthy classes and rich clergy.

Masaryk, who had little interest in the minutiae of theology, portrayed the Reformation as a temperate and "predominantly non-mystical" spiritual movement devoted to "reason," in which "great emphasis was placed on political and social justice" (11, 10):


From the leaders of our reformation we get a desire for clarity, reasonableness. Morality must be the decisive element in religion, Morality means the establishment of fraternal ties with one's fellows, it means energetic work for one's fellows; today, we would express it in terms of coming to grips with the social question. Further, we see that our religious striving was democratic, nonaristocratic; we see the anti-clerical emphasis of our reformation. (11)

Masaryk was well aware that the Reformation was a religious and not merely political movement, but he saw the two as intimately connected, both causally and intrinsically. He argued:


The American Constitution, imitated in Europe, grew directly out of the Reformation and the movement for religious freedom. A person who is free spiritually, a person enjoying religious freedom, will find his true political way. And conversely, political freedom facilitates religious freedom. As soon as we reach political liberty, our first act will be to separate church and state. Religion must be—as it was to Hus—a matter of conscience and not of politics. (14)


I can think of no better conclusion to these remarks than the well-known prayer of Hus. Let us heed it, let us heed it well: "Seek truth, listen to the truth, learn the truth, love the truth, speak the truth, keep the truth, defend the truth with your very life!" (14)


For Masaryk, shared commitment to that ideal of humanity with its concomitants, democracy and social justice—basically respect and love for one's neighbor—is what made a Czech nation out of the ethnically Czech population of the Czech lands. In anticipation, Czechs first turned to it in their struggle for freedom of faith within the Church in the Reformation. In the name of that ideal they entered upon modern national identity in their nineteenth century rebirth. In the name of the same ideal they triumphed in the creation of the free Czechoslovak state.  However imperfectly, that state embodied the ideal of humanity in its commitment, as a token of a future humankind committed to human dignity and mutual respect, to freedom and social justice.

In the Czech Republic, 6 July is now a holiday honoring Hus (Den upálení mistra Jana Husa). Here, a discussion of Hus's legacy from Radio Prague on that date in 2010.

I'll soon have a little piece on the impact of the Reformation in the Czech lands for The Public Humanist.