Or in our case: 1759. (Well, 1735, if you date the history of Amherst Town Meeting from the time when this was simply the Third District of Hadley.) 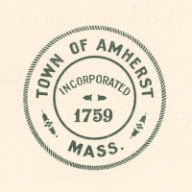 Given that a Charter vote to reform our system of government is now on the table (if not yet the ballot), I'll dig up some goodies from the vaults.

As noted recently, one of my favorites is this clip from the classic "Newhart" show in which comedian Bob Newhart plays a man who, with his wife, moves to rural Vermont and fulfills their dream by purchasing a classic country inn.  In this 1982 episode--"All Hail the Councilman"--set soon after his arrival, he seeks a stop sign for a dangerous intersection near the inn (more on that in a later post) and is encouraged to run for "town council."

Although the gathering that he attends is called a "town council," it actually functions like a traditional open town meeting except that the members elect one another (what? they couldn't get any real New Englanders to advise them on this?!). Then again, perhaps that confusion or hybrid form is completely apropos, given the choices now (or soon?) before us.

In any case, although one complaint about Amherst Town Meeting is that we spend too much time talking, part of the humor here nonetheless also rings true: the speed with which we approve most budget articles, and our inveterate tendency to take stances on foreign policy matters on which we cannot possibly have any practical influence. Oh, yes: and there is the crank in the back of the room who always brings forward his pet motion (I'll leave it to you to decide whether we have an equivalent here). And a bonus: dress code.

Questioned by Bob as to why the votes on expenditures proceeded so quickly, handyman George Utley (played by real-life close friend Tom Poston; see below) responds:

When Bob is surprised that "town council" meets only once a year rather than once a week, George responds:


What would we talk about every week?

Fun facts to know and tell:

Tom Poston--said to have "appeared in more sitcoms than any other actor"--was a World War II pilot whose aircraft carried paratroopers on D-Day. In addition, he was married to Suzanne Pleshette, who played Bob Newhart's wife on the predecessor series, "The Newhart Show."