August 2002: Julia Child's Kitchen Becomes Historical. And stray thoughts on the period room (not necessarily in that order)

Traditional "period rooms," once a staple feature of the museum of history or fine arts, fell into disrepute in recent years for a variety of reasons. As one curator puts it, they often incoherently (re)presented "decorative arts displays" or "local history" or "confusing combinations of both approaches." Still, there is certainly a value to preserving the individually significant interior as well as the exemplary collection for the study of material culture in general.

In its original incarnation as the spanking new but architecturally retrograde Museum of History and Technology (1964), the National Museum of American History (as it is now known) still featured old-fashioned period rooms (e.g. for showing off the dresses of First Ladies), considered at the time "a certain crowd-puller."

Still, this is not to say that everything was choked in conceptual cobwebs. My favorite example: in 1963, activists saved an 18th-century Ipswich, Massachusetts, house from demolition literally at the last moment by arranging to have the Smithsonian acquire it. So, instead of yet another Colonial period room, we have an entire home (the largest--some say: greatest--artifact in the collection) which tells the story of both structure and inhabitants from its origins to its abandonment. As the Smithsonian puts it, "The five families whose stories are told here were not famous, but they remind us that history happens in parlors and kitchens as well as in the halls of Congress." In the most recent interpretation (2002), portions of the walls have been opened up to reveal the timber-frame structure, thus doing justice to the original focus on the evolution of technology. 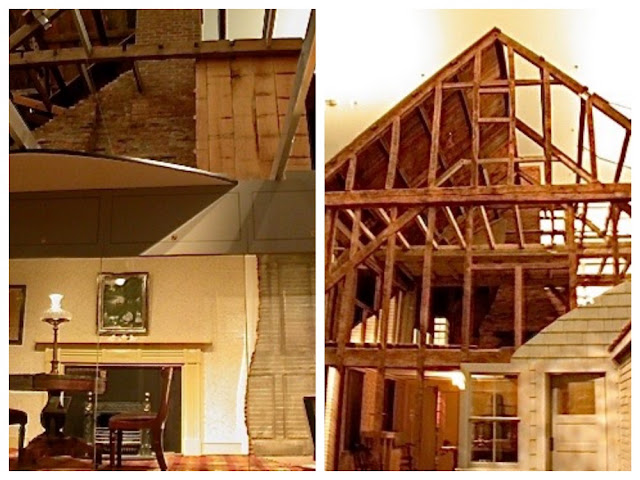 The Museum continues to think innovatively in its acquisition and interpretation practices regarding historic interiors and objects. To be sure, you can still find such things as a 17th-century chair-table (nothing wrong with that!)--but also Archie and Edith Bunker's chairs, from the TV series, "All in the Familly"--which a curator boldly calls "the equivalent of the "Appomattox chairs" used by Grant and Lee when the Confederacy surrendered.

Equally interesting are the larger interior ensembles. For me, one of the most memorable and moving is the famed Greensboro desegregation lunch counter. As of 2008, it is also part of a new series of "landmark objects" anchoring and highlighting the themes of a given wing.


One kitchen that made history

As the Smithsonian says of the Ipswich House, "history happens in parlors and kitchens as well as in the halls of Congress." And so, it seemed but fitting that at least a portion of another Massachusetts house should enter those galleries. It didn't make the cut as a "landmark object," it didn't date back to the 18th century, and it didn't play a role in the triumph of human rights, but it did change America in its own way, from foodways to women's history, and it has proven extremely popular. I am speaking of Julia Child's kitchen.

It opened at the Smithsonian on August 19, 2002, only shortly after the updated installation of the Choate House from Ipswich. When Julia Child (1912-2004) decided to relocate from Cambridge, Massachusetts to her native California at the end of her public career, she gave her kitchen to the Smithsonian.


As Mass Moments puts it:


Designed by her husband Paul in 1961, the room was specially tailored to his wife's particular needs, with high countertops to accommodate her six-foot two-inch frame. In her ten cookbooks and eight television programs, several of which were filmed in her own kitchen, Julia Child demystified French cooking for American audiences. She became, in the words of the New York Times, "the French chef for a Jello nation." The exhibit is titled "Bon Appétit!" — as she signed off at the end of every show she hosted during her 38 years as a television icon.

Viewers of the film, "Julie and Julia" (the former was a whining Amherst College graduate: nuff said) will be familiar with the backstory behind the first great cookbook, but just in case, Mass Moments explains:


She fell in love with French food and enrolled in the prestigious Cordon Bleu culinary school. In 1952 she and two Frenchwomen formed a cooking school and began writing a French cookbook for American readers.

In 1956 the Childs returned to the U.S. and settled in Cambridge, Massachusetts. Julia Child continued work on the book, communicating frequently with her French partners. When Mastering the Art of French Cooking was published in 1961, with 734 pages of detailed but unintimidating recipes, it was a critical and popular success. In an era when American "cuisine" consisted of cake mixes, TV dinners, and health food crazes, the book made sophisticated French food not only appealing but accessible. Child ignored fads, and Americans embraced her "cuisine soignée: long, caring cooking." 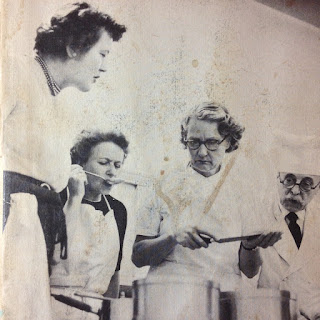 My mother was a good cook, but by no means a gourmet. Still, Julia Child's first great book was one of the main cookbooks in our kitchen. I believe it was a present from my father.

When I learned to cook (mostly while I was a grad student: it seemed preferable to bankruptcy or starvation), I bought myself a copy, too. (Later, my mother gave me more recent Julia Child books as presents.) 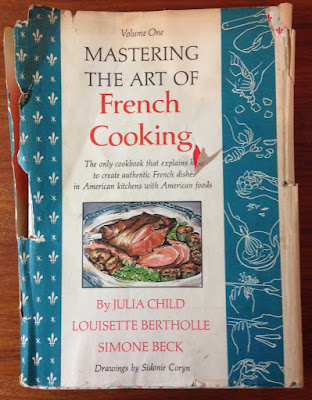 The original installation, pictured above, closed in early 2012 and, to mark the centennial of Child's birth, was reinterpreted later that year as the focus of a new exhibition, "FOOD: Transforming the American Table 1950-2000."

It seems fitting: just as the Choate house chronicled the lives and material culture of ordinary people "who were not famous," so, too, her kitchen helps to chronicle the transformation of the way that all of us eat and think about food.  There is more than one way for history to happen in the kitchen.

Local connection: The pioneering chef was a graduate of Smith College (history major, I am proud to say), which celebrates a Julia Child Day. In fact, I recall meals at the former Faculty Club where we were served a special "Julia Child" label house wine.

[updated 26 August; full piece did not post the first time]