As the anniversary of the start of World War II draws near, time to squeeze in one more piece on the endgame. Recently, it was Okinawa and Hiroshima in the spring and summer of 1945.

It is a British brass shell casing, decorated and inscribed, "Souvenir de la Liberation." I bought it from an English antique dealer couple who were visiting a colleague here in the US and had brought a few items to sell during their trip. I haven't researched is as thoroughly as I would like, but unless I am way wide of the mark, it is a shell from a 40 mm Bofors L60 gun (1 , 2) which was widely used by both sides. 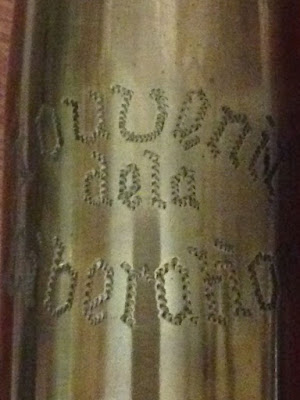 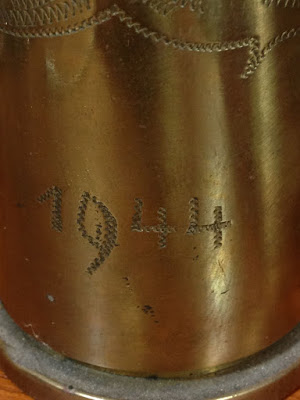 As a piece crafted to celebrate and recall the "Liberation," it presumably dates from sometime between D-Day and August 27, when De Gaulle told the Resistance that their work was done, or soon thereafter.

Many would term it "trench art," which Paul Cornish's photo essay on the Imperial War Museum website defines as "objects made from the debris and by-products of modern warfare": originally applied to works by soldiers of the First World War, but now even beyond that period. He further notes,  "Many examples of trench art were also made by local civilians for sale to soldiers" and "after the war. . . for sale as souvenirs to the visitors to battlefields and cemeteries." Given that this one is French, and taking the inscription into account, I would assume that it falls into that latter category of works made by civilians for the general market. That said, the fact that the word, "Liberation" lacks the appropriate accent aigu on the "e" (é) could perhaps (though probably not?) suggest a foreign origin.


Although it was sold as a topical item tied to the events of the day, it has somehow survived for over 70 years, thus indeed preserving the memory of a moment that seemed to herald the dawn of a new world. 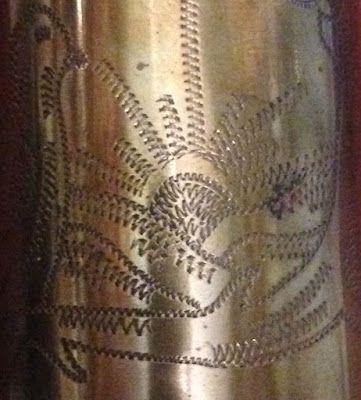 Naive, we may think. Barbarism and intolerance have not disappeared. Europe was powerless in the face of the genocide committed against Bosnian Muslims and has also failed in the face of subsequent horrors. And yet, as this stamp issued for the 50th anniversary of the end of the war reminds us, something of that hopeful moment did become a reality. 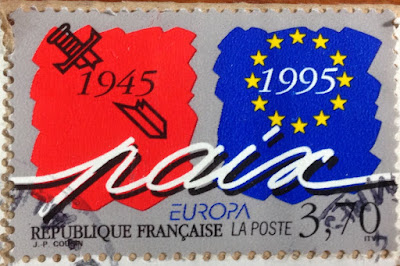