Any commemoration of the anniversary of the outbreak of World War II would be incomplete if it neglected the sordid bargain that preceded and enabled it.

On August 23, 1939, Nazi Germany and the Soviet Union stunned the world by signing a ten-year nonaggression pact. The overnight and shocking shift among erstwhile bitter enemies provided the background for similar episodes in George Orwell's 1984.

Those who pay attention to history are aware of the shameful agreement. Yet I would wager that even many of them are less than well informed about the immediate consequences: we always speak of Germany invading Poland on September 1, 1939--but how many of us know that Soviet forces entered on September 17 and occupied the eastern portion of the country? It's a question that I always raise when I teach twentieth-century European history, as I will again in the spring.

Ironies abound. On the one hand, the pact stands as the epitome of cynical (as opposed to naïve) deal-making with Hitler. On the other hand, contrary to the intentions of those behind it, it saved as well as took innocent lives: those in the eastern occupation zone who did not fall victim to Soviet terror escaped Nazi rule in 1939, and some, by one means or another and with a great deal of luck, were thus also able to do so after 1941.


Some in the "West" broke with the Communist Party over this apparent betrayal of principle. Others rationalized it.

The pact exposed the hypocrisies and fault lines on the left. Some in the "West" broke with the Communist Party over this apparent betrayal of principle. Others rationalized it.

My mother recalled that, when she was a student at Hunter College after the outbreak of World War II, fellow student and obnoxious Stalinist "activist" (as we would call her nowadays) and future Congresswoman Bella Abzug was running around, loudly defending the Pact and proclaiming, "The Yanks Aren't Coming!" For the Stalinist apologists, World War II was a war between imperialist rivals in which right-thinking socialists could have no righteous part. Of course, that eventually changed. When the inevitable German attack came in the summer of 1941, Stalin, having refused to heed the warnings from his own spies, was caught unawares (1, 2). And so, the communist loyalists and fellow travelers in the West suddenly discovered that the War was a worthy cause, after all. Nick Cohen adduces a host of examples from the UK and eviscerates that slavish mentality, adding: "The echoes of our own day when so many on the liberal-left go along with Islamo-fascists are chilling and fascinating."

Following are some graphic reactions from the time. 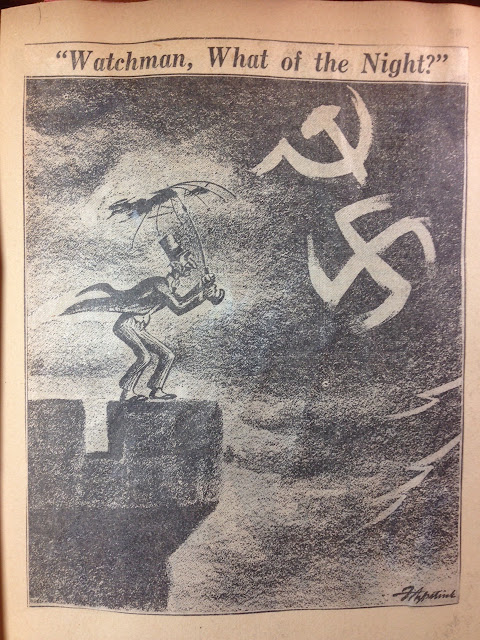 The above image, by progressive cartoonist Daniel Robert Fitzpatrick, cites Isaiah 21:11 to convey the concern over the storm on the horizon. Two-time Pulitzter Prize winner D. R. Fitzpatrick (as he was most commonly known) was, I am pleased to say, a Wisconsin native who worked first for the Chicago Daily News and then the St. Louis Post Dispatch (1913-58), for which he produced this and other famous pieces. 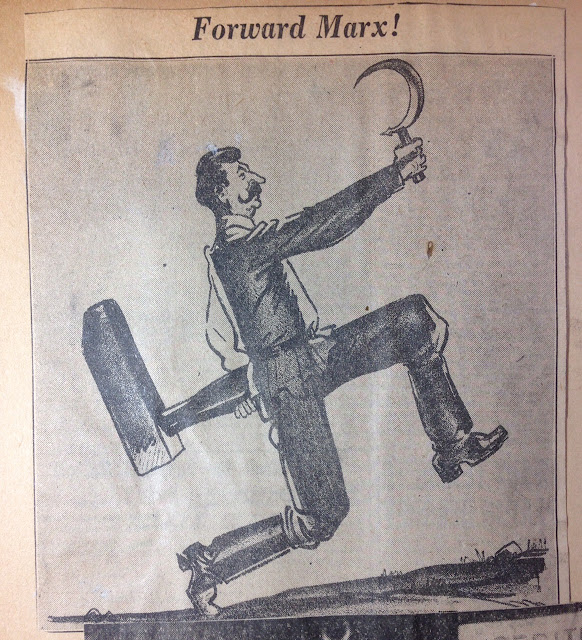 This piece, by contrast, makes a more explicitly political statement about the Nazis and Soviets, as such.

Both images come from a World War II scrapbook that I acquired a good many years ago. I don't know anything about its origins, but the American owner religiously clipped and saved brief press reports, photographs, and cartoons from the early days of the War.

They are powerful. Another image (not from the scrapbook) hints at the ultimate consequences of the pact. This photograph was taken moments after the delegates to the Twenty-first Zionist Congress, meeting in Geneva in August, 1939, heard the news. 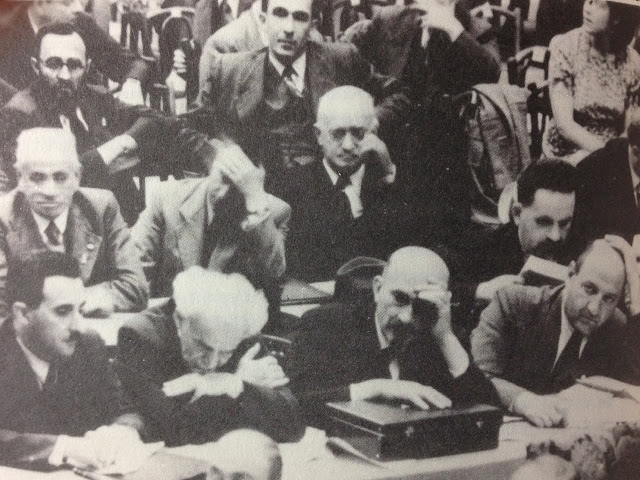 The late Conor Cruise O'Brien, who had the interesting fate of serving as Irish Ambassador to the UN--and was thus literally caught between the Iraqi and Israeli delegates in the General Assembly--comments, in his book The Siege (from which this photo comes):


The Twenty-first Congress broke up earlier than planned because of the announcement of the Hitler-Stalin Pact (August 23, 1939). There is a photograph of the Congress platform, taken just after the news of the pact broke. In a small group--the copy before me shows twelve heads fully--four, including Weizmann, have a hand over their face or their head. Ben-Gurion, beside Weizmann, has his head bowed over his hands, which are crossed on his chest. They do not look like people who have just heard a piece of political news. They look like people who have heard a death sentence pronounced on members of their family. (p. 242)