Robespierre: It Takes a Tender Man to Lead the Terror (with a nod to Mike Huckabee)

And  . . . having noted the murder of Jean-Paul Marat by Charlotte Corday (1, 2), it would not be appropriate to neglect the anniversary of the fall of the Revolutionary leader Maximilien Robespierre--"The Incorruptible."

So, I had planned to write something about this anyway, but I never thought that Republican presidential candidate Mike Huckabee would provide the added hook. 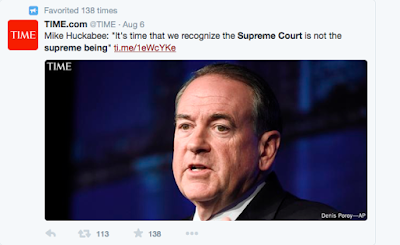 It's not often one hears the term, "Supreme Being," used in modern political discourse. It was a name for the divine favored by Enlightenment deists who rejected "revealed religion," and is thus not part of the vocabulary of a Christian conservative such as Huckabee. Presumably, he just needed the parallel construction in order to drive home his anti-government message.

And how is all this connected with Robespierre?

He was a far more complex figure than the caricature propagated by his enemies would suggest.  For example: although opposed, with the majority of the revolutionaries, to any social or political role for the Church, he considered it tamed by the early reforms, and condemned the extreme "de-Christianizers" who pursued policies ranging from destruction of religious art and architecture to slaughter of priests and nuns. He did not see the individual believer as a threat, and on the contrary, successfully advocated for freedom of worship, arguing that mindless persecution of the religious would only revive the mindless fanaticism that the Revolution had sought to eliminate.

For Robespierre, atheism was an aristocratic affectation, at odds with both democracy and the emotional needs of the populace. Belief in a deistic divine presence ensuring the reward of virtue and punishment of vice was central to his worldview.

Belief in a Supreme Being had been part of the French Constitution since April 1793, but Robespierre sought to restore cultural peace and unity by clarifying and formalizing the consensus belief. He set forth his ideas in the Report to the National Convention on the Connections of Religious and Moral Ideas with Republican Principles, & on National Festivals on 18 Floréal, Year II (May 7, 1794)

Following the political and philosophical exposition, the Report set forth a 15-point decree on the cult and its festivals. 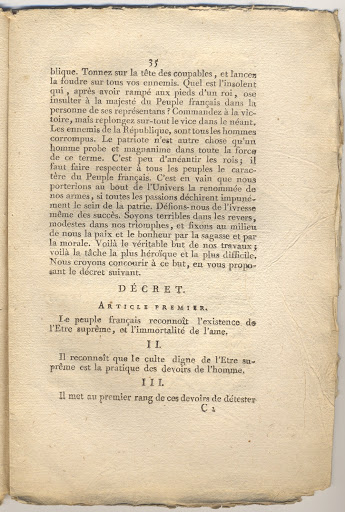 The French people recognizes the existence of the Supreme Being, and the immortality of the soul.

It recognizes that the manner of worship worthy of the Supreme Being is the practice of the duties of man.

It places chief among these duties: to detest bad faith and tyranny, to punish tyrants and traitors, to assist the unfortunate, to respect the weak, to defend the oppressed, to do all the good that one can to others, and to be unjust toward no one. . . .


It concluded with the outline of a Festival of the Supreme Being, proposed by the artist Jacques-Louis David, to be held on 20 Prairial Year II (June 8, 1794) 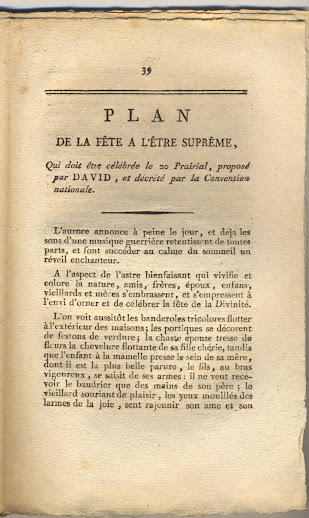 Whereas Robespierre viewed the Festival as a crucial last attempt to reinvigorate the Revolution, both contemporaries and modern scholars have seen it as one of the factors that contributed to his downfall. It alienated both de-Christianizers and more traditional deists; critics accused him of megalomania and seeking to set himself up as  a new "pope" or "Mahomet" (Muhammad).

A contemporary account described him as "dressed in a sky-blue coat, with exquisite ruffles of lace, and holding a bunch of flowers, fruit, and ripe wheat in his hand." 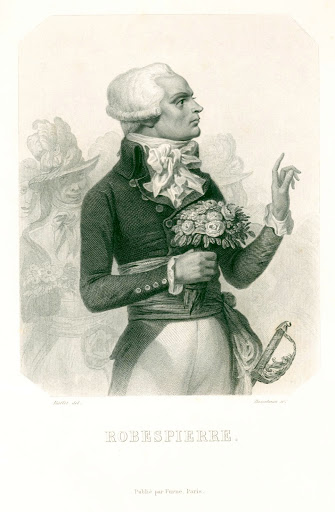 from the first edition of Alphonse de Lamartine's History of the Girondists. The work ran to 61 "books" divided among 8 volumes, whose publication (Paris: Furne et Cie.,1847-50) coincided with the outbreak of a new revolution, in which the Romantic poet and liberal politician himself briefly played a key part. It was accompanied by 39 steel engravings of Revolutionary figures, along with a portrait of the author. The plates, drawn by Denis August Marie Raffet (1804-60), engraved by various artists, and printed by Plon, were issued separately in 13 installments costing 1 franc each, from 1848 to 1850 (sheet size: c. 19.5 x. 25.7 cm)
{enlarge}

This hostile engraving from the mid-nineteenth century is arguably intended to convey that view of the priggish and arrogant Robespierre. At the same time, in retrospect it perhaps inadvertently humanizes him by presenting him in a manner to which we are unaccustomed.

The rather soft-looking Frank Perdue may have laughed all the way to the bank on the slogan, "It takes a tough man to make a tender chicken."

Well, the Robespierre corollary is: it took a tender man to lead the Terror.