In arguing in favor of the nuclear deal with Iran, President Obama cited President Kennedy and moreover copied his predecessor by choosing to make his principal statement on the agreement at American University where, in June 1963, Kennedy had delivered a major address on foreign policy and nuclear arms control.  In that address, Kennedy announced the resumption of negotiations over arms control.

In the tense era of the Bay of Pigs fiasco and new Berlin crisis, both the US and USSR had resumed nuclear testing. The narrow avoidance of war during the Cuban Missile Crisis prompted them to reconsider.

The result was the Limited Nuclear Test Ban Treaty, which, as  summarized by the Kennedy Presidential Library:


prohibited nuclear weapons tests or other nuclear explosions under water, in the atmosphere, or in outer space
allowed underground nuclear tests as long as no radioactive debris falls outside the boundaries of the nation conducting the test
pledged signatories to work towards complete disarmament, an end to the armaments race, and an end to the contamination of the environment by radioactive substances.


The US, UK, and USSR (the only nuclear powers at the time, aside from France, which continued to test) signed the Treaty on August 5, 1963, a day before the anniversary of the Hiroshima attack. The Senate  ratified the treaty on September 23, and President Kennedy signed it on October 7. 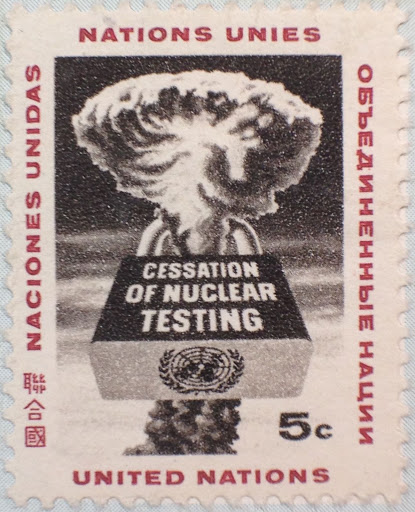 On October 23, 1964, the United Nations released this stamp marking the occasion (one  of five commemoratives that year). Designed by Ole Hamann of Denmark, it was issued in a run of 2,600,000 copies.

Ironically, though, on October 16, 1964, exactly a week before the stamp was issued, the People's Republic of China tested its first nuclear weapon.