Of course, having noted the assassination of Jean Paul Marat by Charlotte Corday and her subsequent execution (1, 2) it would be unseemly not to devote at least a small amount of space to her victim, the radical revolutionary journalist.

For some reason (well, I guess it's not that hard to figure out), I seem to have a respectable stock of Marat memorabilia. Here is one of the most modest items: a small (dia.: 22-3 mm.) uniface copper medal depicting a bust of Marat (with characteristic kerchief on head because of his skin disease) facing left.

The legend reads, "To Marat, The Friend of the People [both the appellation by which he was known and the title of his journal], 1793." There are remains of an attachment loop (bélière). The Stanford University/Bibliothèque Nationale de France collaboration describes this item as from 1793, though other sources suggest that there was also a recast during the Revolution of 1848, when this iconography became fashionable again. (The uniface form and toning of this piece might indeed suggest the latter.) 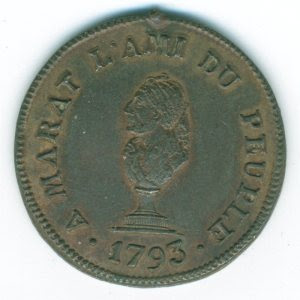 In any case, pause for a moment to recall one radical journalist who was murdered by an extremist at the opposite end of the political spectrum. You need not share his views in order to condemn her act. And perhaps the case speaks to our situation today.