Speaking of public relations failures and dishonesty in advertising . . .

A while back, I mentioned that hummus boycotts (yes, really) had become the latest vehicle for "BDS" anti-Israel activism, and that a local church had played host to a how-to event. There were puzzling discrepancies between the rather typically bland and vague announcement put out by the church "peace" group and the more revealing ones by co-sponsors Hampshire College Students for Justice in Palestine (SJP) and the Western Massachusetts Coalition for Palestine.

I have been told in the meantime that at least some organizers within the church were not aware of the true nature of the event (which would be all too typical of BDS operating procedure). That of course suggests a rather stupefying lack of basic curiosity as well as due diligence, but intention can matter, so it's worth noting. Sometimes, one learns lessons only with considerable difficulty.

Department of irony: this was the scene a week ago on the snack counter in the office of the Hampshire College School of Critical Inquiry (formerly a.k.a. "Social Science"), home to the faculty and students most active in Students for Justice in Palestine. 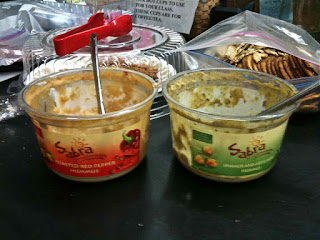 And those are the large-size containers, too. I guess someone didn't get the message.

Apparently the activists at De Paul University are made of sterner stuff and prepared to make the ultimate snack-rifice.  That institution, which briefly banished and then reinstated the offending legumes last fall, has become a battlefield once again.

Sabra hummus reappeared on the dining tables there until the Fair Business Practices Committee could issue a judgment, but in the meantime, SJP, unwilling to wait for the result, secured a referendum on a proposed ban. As the Huffington Post puts it with understatement, the language on the ballot is "somewhat leading":


“Sabra, which currently supplies hummus to the DePaul cafeteria, is co-owned by the Strauss Group. The Strauss group provides financial support and supplies to the Golani and Givati brigades of the Israeli military, which have been found by the United Nations to be violators of human rights. Are you in favor of replacing Sabra with an alternative brand of hummus?”

Subtle. As one might suspect, the issues are actually a tad more complicated.

Voting is open until Friday. This is the first such campus-wide referendum there in a decade. (Nice to know the students have their priorities straight.) Oh, and by the way, according to a University spokeswoman:  the result is not binding.

Two clashes over hummus at DePaul in half a year: once more into the fridge fray. Not exactly the Second Battle of the Marne, but as they say of academic politics: the fights are so nasty because the stakes are so low.

The tension is over, the results are in:  1,127 students voted in favor of the boycott, 332 voted against, and 8 voted "other" (huh?).  Unfortunately, 1,500 students had to vote in order for the referendum to be counted as valid, and as noted above, even then, the result would have no power over actual university decisions. The BDS movement, although acknowledging those drawbacks, of course nonetheless portrays the event as a great symbolic and moral success (does it have any other operating mode?), indeed: "an incredible, landslide victory."

The other reading, of course, is that no one really cares and the whole thing doesn't matter. The nature of a referendum is that such measures are driven by the proponents, who have the strongest feelings about the issue; the elections are theirs to lose.

Boycott activists could not even muster the minimum number of participants--a mere 6 percent of the student body of more than 25,000. The vast majority of students--neutral, opposed, or confused--could not be bothered to vote.