I had no idea that last month's post on false claims of University of Massachusetts sponsorship of an anti-Israel boycott event would generate so much interest and commentary. (Evidently it struck a nerve.)

The attempts to explain away the mess are laughable.

Posters were being "redacted"?! Please.

Using that specialized term to mean simply "write," "edit," or "correct" is either an affectation or an evasion or both.  The compilers of the Bible "redacted" various texts. The CIA and government agencies "redact" sensitive documents prior to public release.

Then again, if one takes the word as connoting an attempt to conceal something embarrassing or incriminating, maybe it does apply:  "to select or adapt (as by obscuring or removing sensitive information)"; "editing a record to prevent public viewing of material that should not be disclosed."

It's so simple that one should not have to explain it again: When patently false information circulates up to the last minute, that is not due to editing or proofreading errors—unless one wishes to imagine that the organizers are hopelessly incompetent. Why would anyone even draft, much less release, announcements of sponsorship that in no case had been confirmed, or even sought? 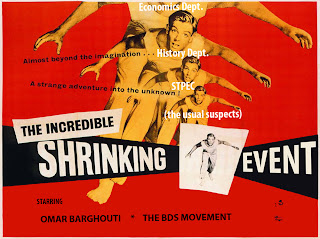 On the day of the event,

2) this description (submitted a day earlier for approval) appeared in the Hampshire College daily announcements, falsely claiming sponsorship from Social Thought and Political Economy (which had rejected the request) and History (which had never even been asked). 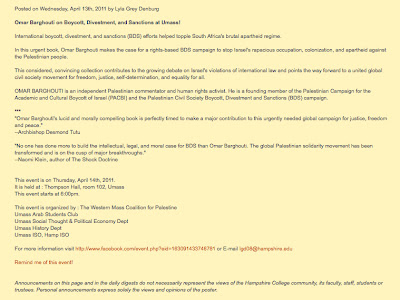 One has a right to expect that the announcement of an event, on the day of the event, by the sponsors of the event, accurately represents their knowledge and views.

Anyway, enough.  Time to move on.