Hate and Hope: Groping Toward Peace

As readers of these pages know, 2011 has already witnessed more than its fair share of tensions surrounding the Middle East here in Amherst (1, 2, 3, 4, 5). Ultimately, those tensions have as much to do with the way we talk about the issues as with the substance itself.

We heard of yet another example at “Art, Conflict, Identity: A Symposium with Israeli / Palestinian / American Writers & Artists” here at Hampshire College on April 5. As the session was opened up to discussion, a visiting Israeli research scholar in the audience spoke up. She had been taken aback to learn that a member of the Hampshire College faculty had formally complained to the host institution in our Five College Consortium that no Palestinian had been invited to present her work, as well. That was of course an absolute affront to academic freedom as well as common sense, given that the visitor’s work had nothing to do with the Arab-Israeli conflict. (The accuser moreover rebuffed an attempt at dialogue.) The host institution responded in the only manner acceptable, which is to say: with a sharp rebuke to the complaint.

The problem went deeper. As the visitor put it, “every time I hear people talking about Israel, I feel that there is this huge gap” between the reality and what Americans understand.” In particular, she said, she was tired of the reductionism that invariably left her “stigmatized as the ‘Zionist Jew’” regardless of her own political views and activity, which, as it happens, place her firmly on the left and include extensive work on behalf of Palestinian-Israeli cooperation (not that any of those things is in contradiction with “Zionist Jew,” properly defined). 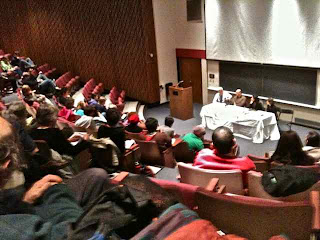 The dismaying incident that she recounted stood in sharp contrast to the tone and level of discussion in the lecture hall. The guests were Palestinian-American physician Fady Joudah, who has received distinguished prizes for both his own poetry and his translation of Mahmoud Darwish, and Adina Hoffman, who, dividing her time between Jerusalem and New Haven, has written an acclaimed biography of Palestinian-Israeli poet Taha Muhammad Ali, and most recently, a history of the Cairo Genizah. The session began under a pall, for the previous day had brought news of the tragic and brutal murder of Juliano Mer-Khamis, a self-proclaimed Arab and Jew alike, and Director of the celebrated Jenin Freedom Theater. For that reason, a third panelist, filmmaker Udi Aloni, who works part of the year in Jenin, canceled his appearance at the last minute.

The panelists had just finished their presentations by speaking of the problems of stereotypes and representation, in particular, the burden that one feels, first when one is expected to stand or speak for one’s (presumed) group identity, and second, when others (whether inside or outside the group) impose their expectations on the nature of that identity. Joudah, for example, noted that he was “hypersenstitive” to the relentless expectation that a Palestinian poet be “political.” For the poet to produce high art that is not political may allow him to “transcend” the political, but then at the cost of having accepted the logic of transcendence—”an imposed concept”—which thus reaffirms the political as the norm. Hoffman explained that she felt this pressure, too, though Joudah insisted rather sharply, and not for the only time, that the two groups experienced external expectations differently because they approached it from quite different situations (the conversation was not all agreement, free of tension, but no one should have expected that of honest dialogue). Hoffman had perhaps elicited the anecdote from the audience when she spoke resignedly of the now almost universal unwritten rule that one cannot write about or hold an event featuring an Israeli voice unless it is paired with that of an Arab, and vice versa.

Both writers clearly bristled at the imposition of narrow and simplistic expectations. They spoke of the love of revolutionary literary form, from Dickinson to Whitman to Kafka. Hoffman mused about the possibility of a postnational world, or at least an art that did not have to answer to the demands of the national: “the borders are there and have to be recognized, but that’s not what you aspire to, poetically.” The transcendence arising from free will and artistic choice, averred Joudah, too, was a desirable thing.

There were other signs of hope. The following week, a local resident, who had just learned of the recent incidents on our campus—the physical and psychological harassment of a pro-Israel student, and the disruption of the talk by an Israeli soldier—wrote a letter to the Amherst newspaper to bring them to the attention of the community and voice her condemnation.

It was the more significant because the author was DeAnne Riddle, who grew up in the Arab Middle East and has long been an advocate for the Arab and Palestinian cause—but also for coexistence with Israel and dialogue abroad and at home. I have known DeAnne for a number of years. We agree on some things and disagree on others, but we have never had difficulty in discussing matters of substance in an honest and friendly way. In fact, we had worked together two years ago to try to foster understanding of and for the Middle East here in one of the local churches.

After recounting the incidents, she concluded:


The Hampshire College administration has condemned attacks and expressed the need for civilized dialogue and general education regarding Israel and Palestine.

As someone who has followed the debate over the Israeli-Palestinian conflict for years, this polarization distresses me. I can remember when speakers wishing to present the Palestinian point of view were silenced on college campuses. Now the opposite appears to be happening. Both sides of the story should be allowed to be told. Inflammatory language and name calling should be avoided by all. A one-sided talk can be challenged respectfully with questions, rebuttals and opposing facts. I wish Hampshire success in calming the waters and obtaining a nuanced, respectful dialogue on this emotional topic.

Some may find this approach naïve. Others may call it decent and sensible.

Coincidentally, or not, April brought further events that seemed to promise a more positive campus atmosphere, about which more in a later post.