Yes, It's That Time Again: The Spring (Open) Season

It's that time of year again.  The beating of my heart quickened when I looked at the calendar—and not only because there was less than a week to go until the start of Daylight Saving Time.

No, it is of course also the season for the time-honored (well, at least since 2005) custom of "Israeli Apartheid Week" (IAW), in which activists, especially at western colleges and universities, attempt to persuade their comrades that the Israel is the most evil state and pressing topic in the Middle East and even the world—though the engrossing spectacle of the Arab revolutionary awakening that is unfolding before our eyes might suggest otherwise.

All the hype notwithstanding, last year's dramatic festivities—including the vaunted "apartheid wall" on the Town Common and campus—generated little interest. The typical result was a yawn rather than a yalla.

That was even more the case this year. Given the débâcle of resentment and bad publicity resulting from the disruption of a talk by an Israeli speaker here last month by Students for Justice in Palestine (SJP), it seems that the activists may have opted to cool down rather than rev up. (Some members have themselves—at least in private, and in contradistinction to confident public statements about plaudits from fellow-students and relentless movement from success to success—expressed regret for that tactical error, their only consolation or excuse being that they had contemplated but not undertaken even more provocative and risky actions.) 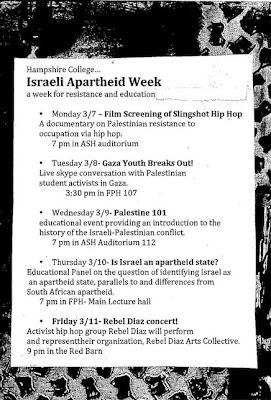 Indeed, if one hadn't been aware of the festive season to begin with, one almost would have had to go out of one's way to find out about it.
The program was modest, but in light of recent controversies and episodes of harassment, the campus remains tense.

Still, there are hopeful signs. To begin with, there was comic relief, or at least, evidence of coexistence.

I came across this scene as I was preparing to teach class and then make a little presentation on the history of antisemitism, with some reference to debates on the Middle East, at the beginning of "Apartheid Week."  The Chasidic rabbi was standing next to the Students for Justice in Palestine table on the Library entrance landing, passing out hamentaschen (customary pastries for the Jewish holiday of Purim).  I politely declined what both had to offer. On my way back out of the building, though, I stopped for a moment to talk. Others, too, seemed interested in the juxtaposition, and engaged in conversation or snapped pictures.  The rabbi explained that he had simply been assigned this space and gladly shared it.  The people at the SJP table evidently felt the same way. 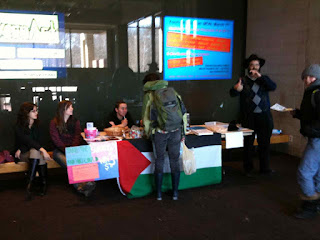 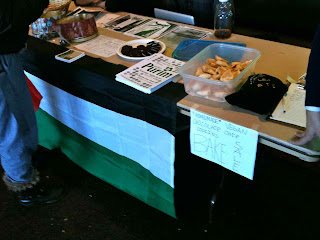 I had been asked to talk about the history and nature of antisemitism—not so much as a riposte to some of the "anti-Zionist" activism on campus (notwithstanding a subtitle on the poster, not of my own devising). Rather, the aim was simply to explain what the term means, given that there are concerns about the rise of antisemitism on campus, in particular, because Jewish history, religion, and culture are inextricably linked with the land of Israel, and because debates about the Middle East all too often seem to juxtapose accusations of antisemitism by one side with the counteraccusation by the other that raising the specter of antisemitism is just a dishonest way of warding off all criticism. 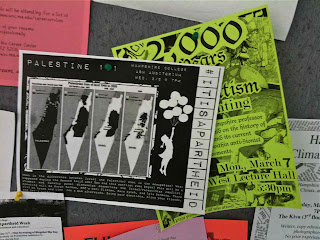 In essence, I did what I have done elsewhere. I recapitulated some of the things that I found to have worked well in a class here, an interfaith discussion group on the Middle East at a local church, and a diversity workshop.


I tried to focus on the historical rather than the political, as a means of explaining why certain traditionally antisemitic images or tropes, whether used intentionally or unintentionally, arouse such passionate reactions.  Further, I tried to suggest that a concerted effort to avoid them was not only morally and intellectually imperative, but also a practical necessity.  The more grave the issues and the more heated the passions, the more important it is to focus on the concrete nature of the controversial issue itself rather than simply applying inflammatory labels that generate more heat than light.

Even when some members of the audience brought up the recent controversy over the disrupted lecture (which I had deliberately avoided), the atmosphere remained calm. I would like to think that we achieved something, and not only by the minimal standard of avoiding conflict and recrimination. Rather, people began to talk honestly of beliefs and feelings alike. They did so in a frank but civil manner, and in a way that opened onto rather than closed off further debate. In fact, several people of varying political and other convictions expressed a desire for more such opportunities.

Hope springs eternal. It's almost spring, after all.