Arabs Across the Middle East Are Dying to Vote (literally). And Amherst? ehhh

To cite Louisa May Alcott, "no earthquake shook the town" (more on that later).

Admittedly, the issues are rather less dramatic here than in Libya or Syria, and many races were uncontested (though because of either satisfaction or complacency rather than dictatorship). 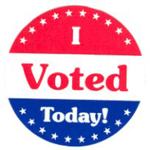 Still, the turnout was abysmal and embarrassing (8.5 %, we are told).  When I went to vote in Precinct 1—properly restored to the traditional site at historic North Amherst Church parish hall after an embarrassing error earlier this year (1, 2, 3, 4)—around 4:00 p.m. the number of valid votes cast was still under 50 (there were a few spoiled ballots above and beyond that).

In the evening, I was in Town Hall for a Historical Commission meeting (next door to the School Committee) and then headed over to Rafters, where several candidates and their supporters were congregating. A good place to follow results, because, above and beyond the presence of the flat screen monitor tuned to Public Access Television, it's guaranteed that someone there will always be getting even newer running vote counts by text message or phone call. Ballots and beer, a match made in heaven.

The results in the key town-wide contested races:

Aaron Hayden won re-election to the Redevelopment Authority after a credible challenge from activist Vince O'Connor (880-504).

The big surprise—even stunner—of the evening was that incumbent Library Trustee Chair Pat Holland finished third (with only 660 votes) in the race for two seats, after fellow incumbent Chris Hoffmann (832) and newcomer Michael Wolff (665). There will no doubt be much speculation as to the cause, in light of recent controversies over the trustees' management of the Library.

As chance would have it, today is an important anniversary in the history of voting rights. Mass Moments tell us,


On this date, in 1880, Louisa May Alcott and 19 other women attended the Concord Town Meeting. The year before, the Massachusetts legislature had made it legal for women to vote in school committee elections. A strong supporter of woman suffrage, the author of Little Women was the first woman in Concord to register to vote. She rallied other women to exercise the limited franchise they had been given. When the day came, a group of 20 women, "mostly with husbands, fathers or brothers" appeared, "all in good spirits and not in the least daunted by the awful deed about to be done." When the votes were cast, she later reported, "No bolt fell on our audacious heads, no earthquake shook the town."(read the rest)

Now this was a revolutionary act, but it took place in the late nineteenth century rather than the late eighteenth, i.e. not part of the American Revolution (although the scene was Concord, Mass.) It can be so hard to keep this stuff straight. Impossible, for the irrepressible and ever-erring Michelle Bachmann, it would seem. Readers will recall that she put her foot in her mouth in January when she declared (in one of several gaffes) that the Founding Fathers "worked tirelessly until slavery was no more." Historians (and also just literate people) were quick to point out that the Founding Fathers owned slaves, and that slavery was not abolished until 1865.  She did it again this month when, speaking at an event in Macnhester, New Hampshire, she confused the Concord in that state with our own beloved Concord:  "You’re the state where the shot was heard around the world in Lexington and Concord," and, lest there be any doubt, repeated the error a few minutes later. As the Boston Globe delicately pointed out, "The “shot heard ’round the world’’ may have echoed in New Hampshire, but it was, of course, fired in Massachusetts." Her response when reporters called attention to the gaffe:


"So I misplaced the battles Concord and Lexington by saying they were in New Hampshire.

Well, that fixes everything.

She claimed that the reporting of an error of which a schoolchild should be ashamed was proof of "media bias."

I wonder who she thinks was at the Boston Tea Party—Alice and the Mad Hatter?