As any Amherst resident or commuter knows, the intersection of East Pleasant and Triangle Streets is one of the worst in town. It is a vital link between downtown, North Amherst, Main Street, and UMass, but at rush hours, cars attempting to make turns across oncoming traffic lead to long delays as frustrated drivers bide their time in line.  Solving the problem has been made more difficult by the unusual geometry of the intersection, whose streets do not meet at neat right angles.

The Town considered all possibilities, from least to most intrusive. Resignalization would not solve the problem, and adding new turn lanes was ruled out because that would take green space from beloved Kendrick Park on Pleasant Street and would now become more difficult on Triangle Street due to the presence of the much-maligned Kendrick Place by Archipelago Investments. That left the roundabout as the most practical option: the smallest footprint, the smoothest traffic flow, and the greatest safety for automobiles, cyclists, and pedestrians. Both the Public Works Committee and Select Board endorsed the proposal last month. 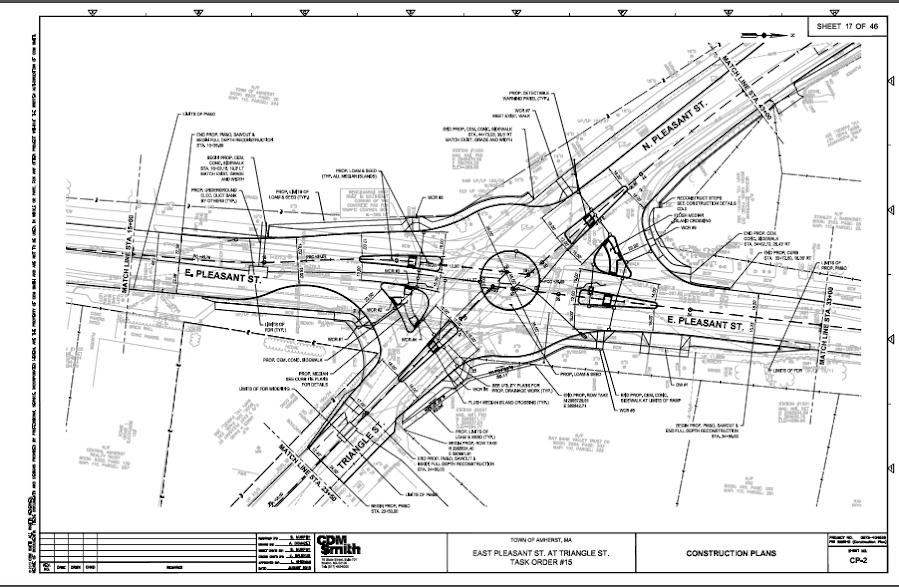 However, the public harbors strong doubts and reservations, even above and beyond general objections to any change. Despite reams of studies proving the greater safety of roundabouts, residents, in emails and personal appearances before the Public Works Committee and Select Board, expressed fears about the fate of pedestrians--particularly the elderly--trying to negotiate the intersection. Other residents worried that intoxicated UMass students stumbling home to their dormitories would be injured or killed. Concerns only grew when Town officials said the raised crosswalks that some requested were not practicable. Indeed, the system of crossings and islands does look intimidating and confusing. 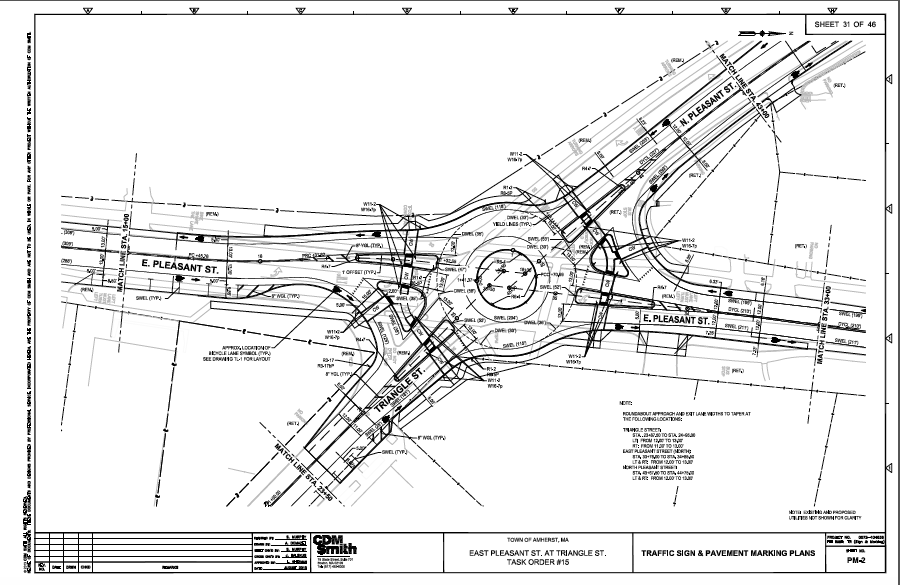 As a result, Town engineers and planners made an accelerated push to revise the design in a way that maintained the integrity of the basic plan while taking these public concerns into account. This week, they finally revealed the conceptual design (so-called 50% stage), shown here in computer-assisted renderings: 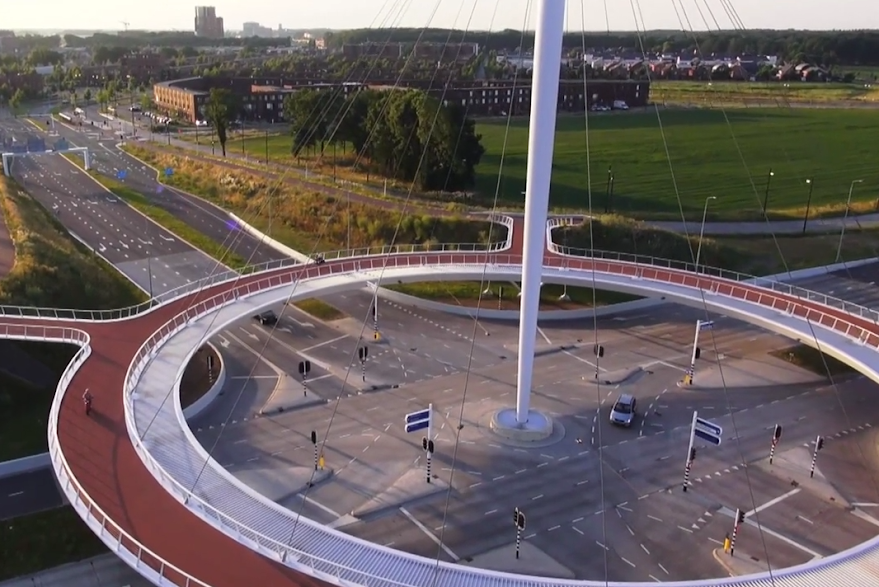 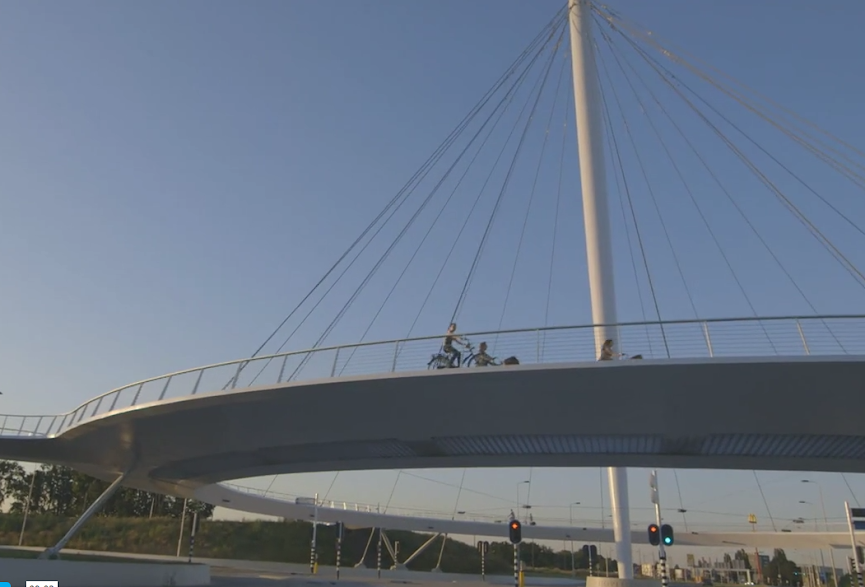 The head of the Department of Public Works explained,  "We think this really kills, well, not just two, but a whole bunch of birds, with one stone."

The bold plan reserves the streets for automobiles, while giving bicyclists and pedestrians a separate, elevated roundabout. And because the elevated level is not bound by the awkward geometry of the existing streets, access angles for pedestrians and cyclists will be uniform. Another benefit is that the raised roundabout and access ramps eliminate the need to take any more green space for asphalt paving.

A final bonus would be the illumination of the roundabout at night. Beauty aside, the raised surface and extensive lighting would help UMass students to wend their way home safe and sound, alcoholic haze or not. 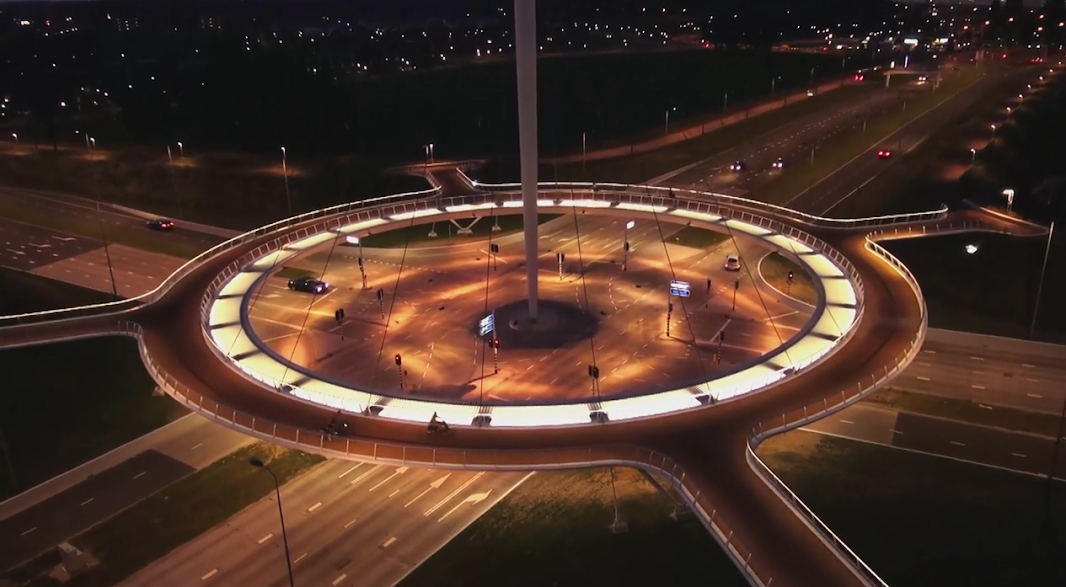 "It's a win-win situation, he said." "The people spoke, we listened. That's why we call it 'Open government To the MAX.'"

Opinions heard from the public of course varied in the town "Where only the 'h' is silent."

The Public Art Commission was thrilled, calling it "a big kinetic sculpture."

A local developer, speaking off the record, called it "a major step forward." In fact, she said, it could be a model for the almost equally problematic North Amherst Center intersection, adding, however, that "it would be even better if we could let market forces rather than big government drive the project. These things are always better done with private funds (not mine, of course)."

A Hampshire College student said that he would now be inspired to design an intersection for his "Division III project" (senior thesis) next year.

A representative for the Chamber of Commerce said the roundabout would be like a beacon, showing that Amherst was no longer afraid of change. Meanwhile, a spokesperson for the Business Improvement District was already musing on ways to take advantage of the landmark: "West Springfield has "The Big E" [Eastern States Exposition]. Amherst could become the 'Big O.' Kids could decorate it for holidays. We could light it up in different colors like the Empire State Building whenever there's a holiday (or a terrorist bombing)."

However, negative comments were more common. One nearby resident called it "ghastly, like something out of 'The Jetsons.'" Another feared that all the UMass undergraduates residing at the nearby five-story Kendrick Place would attempt to throw or fire projectiles into the round target-like configuration. Another worried that the physical forces acting upon people traveling the circular route would cause cancer.

Meanwhile a representative of residents who live in neighborhoods declared: "This is what happens when you let the camel get his nose under the tent: first "The Refrigerator" and then 'The Cheese Wedge' [disparaging names for Boltwood Place and Kendrick Place, by Archipelago Investments], and now, this . . . this 'Cider Donut.' Yes, that's it." She continued, "I'm sure this is happening now because the anti-Town Meeting people won the referendum on creating a Charter Commission. This is why we need Town Meeting all the more."

Another member of the group added, "I live in a different part of town, but this is an affront to us all, completely out of keeping with the neighborhood character."


I am just heartbroken and concerned for our future. It used to be so nice here, you know. We had that empty Chrysler dealership before they turned it into that noisy Bertucci's pizza restaurant. And where that awful Kendrick Place--that dormitory--now stands was a used furniture store in an old house, and then it became a vacant lot with bare soil and that rusty wire fence. We had historic rural charm and open space. You can never get that back.

However, yet another resident, while questioning the need to change the familiar intersection at all, did concede that it might have something to offer:


It offers a welcome relief from all the masculinist new architecture here in town, with those harsh angles and horrid tall walls, thrusting upward. Isn't it about time for something more nurturing, something we can embrace? And I like the idea of a circle because there's no front or back: it's democratic, egalitarian. Though there is that pole in the middle. I'm not too crazy about that. I find it threatening. They should fix that.

No matter which side people are on, the project isn't going to happen anytime soon, given that the funding is not available yet and the town has ruled out taking funding from other road projects. And so, the residents of Amherst will have plenty to ponder as they sit in their cars, stuck in traffic.