So, the flap over the quotation on the Martin Luther King memorial seems to have been resolved just in time for his holiday today.

The King sculpture is not the only example of deliberately and problematically selective quotation on the National Mall. The example that always comes to mind for me is the Thomas Jefferson Memorial, inside of which the Founding Father’s words are displayed. Panel Number 3 contains a ringing denunciation of slavery as “despotism” and a call for emancipation: "Nothing is more certainly written in the book of fate than that these people are to be free.” It stops there rather than including the next sentence: “Nor is it less certain that the two races, equally free, cannot live in the same government. Nature, habit, opinion has drawn indelible lines of distinction between them."

Here, Jefferson is arguably the beneficiary rather than victim of abbreviated quotation though it would be interesting to debate which of the two versions best expresses his larger legacy.

As John Adams famously said, facts are stubborn things. So are quotes, not least to the extent that we marshal them as “facts” in our arguments. For all our modern belief in questioning political authority, we still, across the spectrum, invoke textual authority (in fact, I just did that here). We cite the words and wisdom of great men and women because of the authors as well as the content, in the hope that our arguments might derive strength from their borrowed prestige. If they said it, it must be true.

Worse than selective quotation are spurious quotes or attributions of authorship. The most notorious example pertaining to the Founding Fathers is an antisemitic fabrication in which Benjamin Franklin purportedly warned the Constitutional Convention against Jewish influence in the new nation. Concocted by American right-wing extremists in the 1930s, it was widely cited by the Nazis and still circulates today among hate groups ranging from the KKK and neo-Nazi Aryan Nations and Stormfront to Hamas.

Of course, false quotations can arise from cynical manipulation, misguided good intentions, or just plain ineptitude. Reverend King, poor man, has been a victim of all three: the latter, just months before the Memorial controversy broke.

Soon after President Obama announced the killing of Osama Bin Laden, there began to circulate a purported quotation by Martin Luther King that seemed tailor-made for the occasion:


I mourn the loss of thousands of precious lives, but I will not rejoice in the death of one, not even an enemy. Returning hate for hate multiplies hate, adding deeper darkness to a night already devoid of stars. Darkness cannot drive out darkness: only light can do that. Hate cannot drive out hate: only love can do that.

We are familiar with the related phenomenon in the case of Nostradamus: every time a major world event occurs, someone either reinterprets a vague quatrain as a clear prophecy of the occurrence, or just invents a new one out of whole cloth. It was disheartening to think that Rev. King might be thus exploited and reduced to that status.

In this case, the explanation was a bit more complex but less malign. A Facebook user had apparently offered her personal reaction to the killing (the first sentence), followed by a quotation from King, naming him as the source of the latter. Other users then circulated the comment, without the quotation marks, carelessly attributing the whole to King.

As in other contexts: if it sounds too good (here, in the sense of appropriate) to be true, it probably is.

Unfortunately, deliberate manipulations of King’s writings also exist. The best example, i.e. the one with the longest “legs,” involves an alleged statement on the relation between Israel, Zionism, and antisemitism. Rev. King, who worked closely with many representatives of the Jewish community in the Civil Rights Movement, was a staunch opponent of antisemitism (“because bigotry in any form is an affront to us all”), and a believer in the necessity of a secure and democratic Jewish state, aware that criticism of Israel sometimes stemmed from or masked darker motives. His views on these issues are a matter of record.

Somehow, though, this was not good enough for someone, who felt the need to improve upon reality by concocting a perfect conglomerate of a quote. Over the years, I’ve called people out for invoking it, however innocently. What is so fascinating is that this inauthentic piece, unlike the Bin Laden one, fooled so many people for so long. It can serve as a textbook illustration of the problems of sourcing and interpretation that historians engage in all the time.

At some point a little over a decade ago, a “Letter to an anti-Zionist Friend” purporting to be by Rev. King began to circulate. It reads, in part:


You declare, my friend, that you do not hate the Jews, you are merely ‘anti-Zionist.’ And I say, let the truth ring forth from the high mountain tops, let it echo through the valleys of God's green earth: When people criticize Zionism, they mean Jews — this is God's own truth.

In a way, it is both understandable and astonishing that no one caught on. Whereas the obvious clumsiness and arrogance of the truncated “drum major” quote reflected neither King’s style nor his personality, this one sounded authentic in sentiment and typical in tone.

That the tone was in fact just a bit too “typical”—a patently poor pastiche of the “I have a dream” speech—should, however, have been a tip-off that something was amiss. More surprising still, even though no one seems to have seen the “letter” before it was cited in a reputable 1999 book, no one checked the purported original publication in a 1967 issue of the now-defunct Saturday Review, a reference that proved to be non-existent. Apparently, because the book contained a preface by Martin Luther King III, everyone simply assumed that everyone else considered the text authentic on the grounds that, well, if it was not, someone surely would have said so.

Finally, CAMERA (Committee for Accuracy in Middle East Reporting in America) pursued the matter, and at the start of 2002, sent out a news alert (on which the above is based), announcing that the “Letter” was a forgery.

Part of the problem was that the sentiments expressed in the letter were in general harmony with King’s documented views. The political sociologist Seymour Martin Lipset, and later, civil rights leader Rep. John Lewis, reported that King, toward the end of his life, responded to an anti-Zionist student by saying: “When people criticize Zionists, they mean Jews. You are talking anti-Semitism.” Perhaps because that remark was documented only in imprecise personal recollections of an oral exchange (some critics have even called this account into question) the forger decided to construct a longer formal and exhortatory text around it.

In so doing, of course, he (or she) did no service to either to King or to some putative political cause.

Fabrication will not solve our problems. For that matter, neither will idle speculation. No one can say exactly what Rev. King would make of any specific policy today. We honor him by taking the historical record seriously: pondering his actual words and deeds and their continued relevance in a changing world.

A decade ago, in the same piece that contained the brief, purportedly authentic quotation, Lewis concluded,


King taught us many lessons. As turbulence continues to grip the Middle East, his words should continue to serve as our guide. I am convinced that were he alive today he would speak clearly calling for an end to the violence between Israelis and Arabs. [ . . . . ]

He would urge continuing negotiations to reduce tensions and bring about the first steps toward genuine peace.

King had a dream of an "oasis of brotherhood and democracy" in the Middle East.

As we celebrate his life and legacy, let us work for the day when Israelis and Palestinians, Jews and Muslims, will be able to sit in peace "under his vine and fig tree and none shall make him afraid."

It's hard to argue with that, which should be more than enough to occupy us on a day dedicated to non-violence and service. 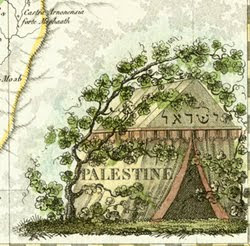 Cartouche from "Palestine," in Conrad Malte-Brun, Atlas Complet (Paris, 1812)
Grapevine and tent with the words, "Palestine" and (in Hebrew) "Israel,"
presumably an echo of Micah 4:4 and Numbers 4:5:
"But they shall sit every man under his vine and under his fig-tree; and none shall make them afraid";
"How goodly are thy tents, O Jacob, and thy tabernacles, O Israel!"