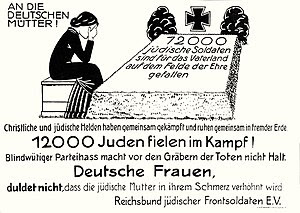 Image via Wikipedia
The United States and Great Britain honor their war dead on November 11, the anniversary of the World War I Armistice. In Germany, the corresponding day is the Volkstrauertag, or National Day of Mourning. It likewise originated during the interwar years but did not fully establish itself as official holiday. At that time, fell during the Lenten season, underscoring the strong Christian symbolism that infused national identity and celebration of the fallen.  Under the Nazi regime, it was replaced by the February Heldengedenktag (Heroes' Memorial Day), whose title adequately conveys the shift in ideological orientation. Volkstrauertag was formally instituted in West Germany in 1948, and relocated to November (two Sundays before Advent) in 1952. Although again tied to the liturgical calendar and Christian symbolism, the new holiday, like many postwar commemorations in Germany, stresses solemn reflection on the costs of war—including civilian victims of oppression—rather than glorification of the dead or military combat.

This year, as the Associated Press reports, the German government and military made a point of honoring the Jewish soldiers killed in World War I.  The  ceremonies are another sign of the efforts on the part of the Bundeswehr to address the controversial moments or "blank" spots in its history, following on the 2008 decision to link induction of new troops with the anniversary of the July 1944 attempt to assassinate Hitler and overthrow the Nazi regime.  In the words of the Jerusalem Post, the deaths of some 12,000 Jews in German service was "a sacrifice that was little-heeded by the public and later denied by the Nazis."  Some press reports garbled the figures.  Thus, the Seattle Times, though likewise citing the Associated Press, spoke of only 395 dead, evidently mistaking the number buried in a particular Berlin cemetery for the total.  It was an ironic mistake, to say the least.

The question of Jewish war service became an antisemitic trope even as the conflict raged. In November 1916, the German High Command carried out the now-notorious "Jew Count" (Judenzählung), allegedly in response to charges that Jews were shirking their patriotic duty.  As my old teacher George Mosse wrote:


While the army refused to let known anti-Semites see the statistics, Jewish organizations themselves welcomed this head count, which would disprove unfounded accusations against their members. The Jews were made highly visible in the midst of the war, singled out from the rest of the population. Their patriotism alone was questioned and, whatever the motive, this fitted in nicely with the prevailing stereotype.  Nothing like the 'Jew Count' occurred in other warring nations.  Already Germany was moving to the fore in questioning Jewish emancipation and assimilation.
[Toward the Final Solution: A History of European Racism (NY: Howard Fertig, 1978), 172]

As it turned out, Jewish participation in the war effort, including combat service, was roughly the same as that of the adult male population as a whole.

The situation in the Austro-Hungarian Empire was slightly more complex.  There, Jews arguably enjoyed a better status and greater representation in the pre-war military culture and institutions, but their overall participation in the war effort was somewhat lower than that of the population as a whole, though for contingent reasons (relation of social class to branch of service; origin in regions in which population became refugees).  Some 300,000 Jews, including 25,000 officers, served under the colors.

In both Germany and Austria-Hungary, the war, initially greeted as the chance to offer the ultimate proof of loyalty and confirmation of belonging, instead turned out to represent the first step toward disenfranchisement.


World War I marked the apogee of Jewish participation in the life of Central Europeans. In the delirious enthusiasm of August 1914, Jews were among the greatest enthusiasts.  They endorsed the war, in part because the enemy was the anti-Semitic Russian Empire, in part because the outcome of the conflict promised to bring their final and complete acceptance.  Jewish writers and journalists did signal service as war propagandists, and thousands of Jewish reserve officers willingly assumed command of their troops.  Never again would Jews be allowed to play such a dignified role in the history of the German-Austrians, Magyars, and Slavs.  Therafter, their role would increasingly be that of victims.  The cruelest irony in the history of Central European Jewry centers on the decorations and frontline photographs Jewish World War I veterans left behind on the walls of their looted apartments while forced to make their way,during World War II, to the gas chambers.
[Beyond Nationalism:  A Social and Political History of the Habsburg Officer Corps 1848-1918 (NY and Oxford: Oxford University Press, 1992), 195]