Just as the first and only official flag contest winds down, nominations for the annual Conch Shell Award continue: some two weeks rather than two days left there. 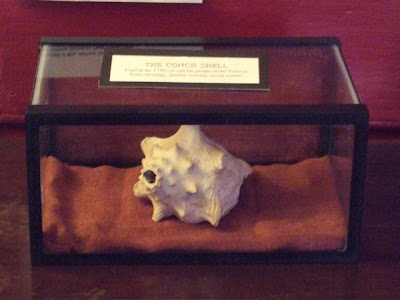 The Society established the award in an effort to bring recognition to those who have made valuable contributions to the preservation and awareness of Amherst’s rich cultural history. The “Conch Shell Award” takes its name from the conch shell or “ye auld kunk” that was used to call Amherst residents in the 1700s to Town Meeting and Worship. The actual “auld kunk” is exhibited in the Amherst History Museum’s Visitor Center.

Anyone can nominate an individual, organization, or business for the award. A committee, appointed by the Amherst Historical Society, will review the submissions. The committee will be looking for nominees who have demonstrated a commitment to the education, preservation, and interpretation of Amherst History. They also will consider those who have used innovative and creative methods in showcasing Amherst and its historic resources.

Past honorees include, Polly Longsworth, Douglas Wilson, James Avery Smith and the 250th Celebration Committee. This year’s recipient will be honored at the Amherst Historical Society’s Annual Founders Celebration on Saturday, February 12 at the Jones Library. The public is invited.

The Deadline for Nominations is December 15, 2010. Nominations should be sent to: Patricia Lutz, Director, Amherst Historical Society and Museum, 67 Amity Street, Amherst, MA 01002 or email to: amhersthistory@yahoo.com

Here is my post on the 2009 ceremonies, from our 250th anniversary year, in which James Avery Smith was the recipient of the award, and Amherst College historian Kevin Sweeney gave the keynote address, on the military career of Jeffery Amherst.

Curious as to what a conch trumpet of the indigenous American peoples might have sounded like?  See Marissa Cevalos, "Ancient Trumpets Played Eerie Notes," which fortuitously appeared in Science News of November 10.