31 May: Memorial Day in Amherst. Honoring those who served; reversing the vandalism of veterans' graves

"War feels to me an oblique place"
—Emily Dickinson


Although I've lived in Amherst for a good many years now and have witnessed many of our local festivities, this was the first time that I took part in the annual Memorial Day parade.  Ours is a small affair. I remember these events as being much grander when I was a child, though whether that was because it was a different era or because I lived in a much larger town, or both, is hard to say (the eternal problem of historical evidence and analysis). Certainly, some of our neighboring small towns have much larger celebrations. The difference may also have to do with the general Amherst distaste for things military and "patriotic" (though it was not always that way).

Still, like other New England towns, we decorate the graves of veterans with flags on the eve of the holiday—thus originally known as "Decoration Day" (it began to be called Memorial Day only from 1882 on), a practice commemorated in the second movement of Charles Ives's "A Symphony:  New England Holidays").

We also hold a small procession (we call it a "parade," but that almost feels like an exaggeration) from the Town Common to War Memorial Pool (ironically, closed for the second year due to budget constraints).


I marched (or walked at a dignified pace), along with my four of my five fellow Select Board members (one was out of town at another holiday program), as official representatives of the Town, behind the lead veterans and flag-bearer, and we returned the waves of the scattered observers (interestingly:  mostly either middle-aged people, or young couples with children). 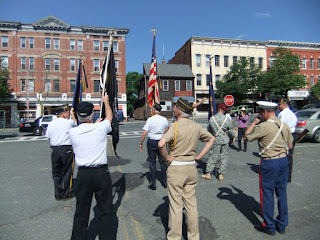 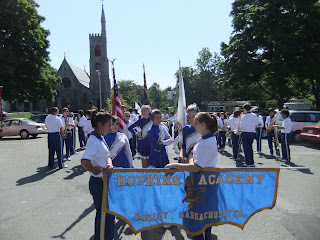 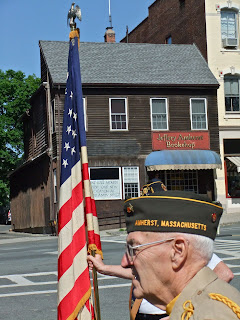 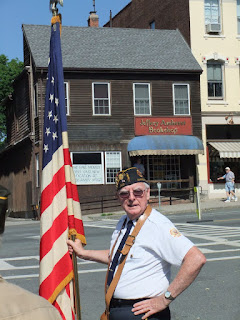 As we turned south from Pleasant Street onto Triangle Street and approached the site of the memorial ceremony, two F-15 fighter jets roared over our heads in salute (I can imagine how well that will go over with some people here), at once a striking contrast to the smallness of our enterprise and an affirmation of its importance.

The traditional ceremony took place beneath the flagstaff: placement of floral tributes on behalf of Town, veterans, and scouts, a few brief remarks by a representative of Veterans Services, reading of the names of the deceased, gunfire salute, playing of the "Battle Hymn of the Republic" and the national anthem. 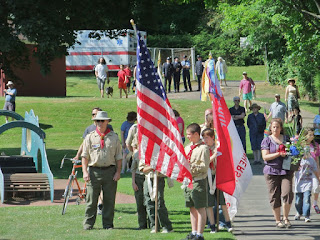 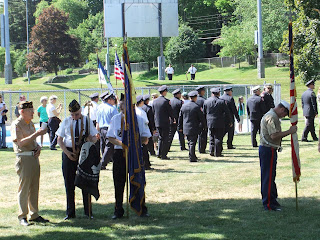 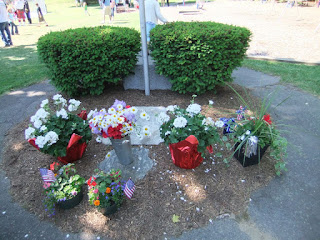 Of particular interest to me was the news that veterans' service markers had been restored in time for the holiday.  It's traditional here to denote the graves of veterans with metal emblems that are both markers (indicating the war or nature of service) and flagholders, for occasions such as this.

This past winter, a number of western Massachusetts towns suffered from a revolting wave of vandalism by thieves who stole some 200 of the markers, hoping to sell the valuable bronze. It's not the first such occasion in the Northeast, and at a time when thieves will steal copper from not only ornaments, but even the wires and pipes at construction sites, it's another sign of desperation as well as greed.The only cemeteries of ours targeted here were the 1818 North Cemetery and St. Brigid's cemetery in neighboring Hadley (though belonging to our local Catholic church).

Now, if there are two groups you don't want to piss off, it's veterans and police, so these thieves, evidently a few bullets short of a full clip, were easily caught a few weeks later when an informant ratted them out.  They had sold the markers, readily identifiable as such, to area metal recyclers whom the authorities had alerted and soon questioned.  When, in a similar incident in New York several years ago, the thieves faced only petty larceny, outraged veterans and other citizens demanded that the penalty be raised to a felony.  Our local vandals have been "charged with felony larceny and larceny from a grave."

The good news was that the bronzes were recovered. The bad news was that, although all were still recognizable as markers, some had been broken, and repair was prohibitively expensive.  We are still pondering how best to treat these artifacts. In the meantime, though, they have been replaced with new markers of bronze-washed aluminum, which is more durable and attractive than plastic but  much cheaper than bronze and therefore less valuable and attractive to any potential future thieves.  Normally, Veterans' Services purchases the markers as needed, but because of the unprecedented number and the expense of replacing the missing markers all at once, additional resources were required to set things right in time for the holiday. Soon after the thefts came to light, Ronald Lashway, owner of Douglas Funeral Home in Amherst, and a relative of veterans whose graves at St. Brigids's were desecrated, established a fund with People's Bank to reward anyone coming forth with information and/or pay for replacement markers.

On the way back to the center of town, I walked through historic 1730 West Cemetery, to see the flags and old markers.  (It was also one of my periodic visits to see how our landscape restoration was progressing; more on that in another post soon.) 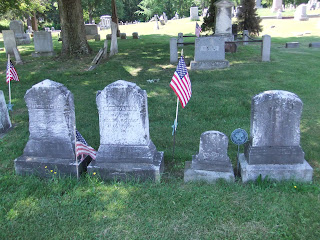 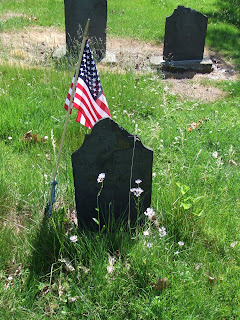 grave of a Revolutionary War veteran 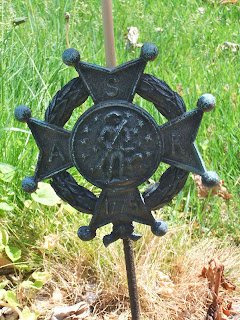 Because my route to and from home every day takes me past North Cemetery, I stopped there, as well, to view the decorated graves, and in particular, the replacement markers. 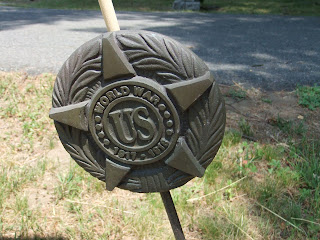 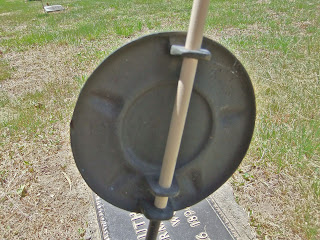 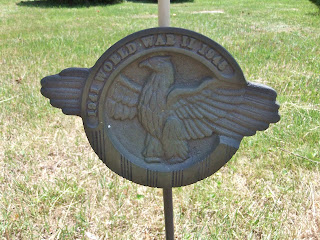 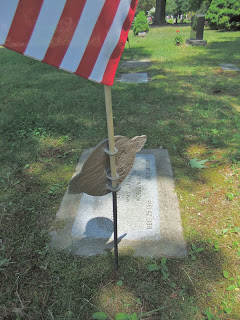 It is of course a mixed blessing that Memorial Day has come to mark the social if not astronomical start of the summer vacation season. It highlights the date while at the same time diminishing its historical and cultural rationale.  In her remarks at the ceremony, Veterans' Services representative Kathleen Pollard urged us to "put the memorial back in Memorial Day," and to observe a moment of rest and silence at 3:00 p.m.

I duly paused from my afternoon labors in the garden, but it was the midday walk through the cemeteries that most powerfully brought home the meaning of the occasion for me.  I've always been struck by the fact that American Memorial Day, a time when we remember life cut short, occurs in spring, the season of rebirth in nature (in many western countries, of course, the association with the christological imagery of days of national mourning or military commemoration was quite deliberate).

In any case, the contrast spurs contemplation as we living mark the sacrifice of the fallen, and also our universal mortality: