28 June 1914: The Assassination at Sarajevo; countdown to World War I

On this date in 1914, Serbian nationalist Gavrilo Princip assassinated Austrian Archduke Franz Ferdinand and his wife in Sarajevo. 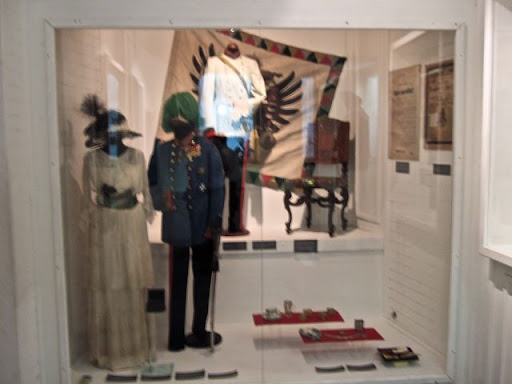 uniforms, dress, and other personal belongings of
Archduke Franz Ferdinand and his wife, with relics
from the assassination at Sarajevo: From "Republic"
60th anniversary exhibition (1918-1938),
Czech National Museum, 2009

The Austrian aesthete Stefan Zweig recalled, in his classic memoir, The World of Yesterday (1943), how the news reached him as he spent his vacation in Baden, near Vienna. In the midst of the popular celebrations on the 29th, a religious feastday, a concert in the park suddenly broke off and people stopped moving. A crowd gathered around a placard:


It was, as I soon learned, the text of a telegram announcing that His Imperial Majesty, the successor to the crown, Franz Ferdinand, and his wife, who had gone to the maneuvers in Bosnia, had fallen victims of a political assassination there.

The reaction was not what our textbooks and popular culture lead us to believe. He recalled popular shock but no real empathy: Franz Ferdinand was not well liked, and "There were many on that day in Austria who secretly sighed with relief that this heir of the aged Emperor had been removed in favor of the much more beloved young Archduke Karl."

What is more, even the political fallout was at first minimal, and even the dynasty seemed more concerned with social etiquette than revenge:


Of course the newspapers printed lengthy eulogies on the following day, giving fitting expression to their indignation over the assassination. But there was no indication that the event was to be used politically against Serbia. The immediate concern of the Imperial house was quite another one, namely the solemn obsequies.

The burning question was not war vs. peace, but rather: would Franz Ferdinand's wife, Countess Chotek, who was of inferior social rank, be granted interment in the Imperial crypt of the Habsburgs?

Like many contemporaries, Zweig felt compelled to remark in his recollections upon the unusually fair weather:


The summer was beautiful as never before and promised to become even more beautiful—and we all looked out upon the world without a care. I can recall that on my last day in Baden I was walking through the vineyards with a friend, when an old wine-grower said to us: 'We haven't had such a summer for a long time. If it stays this way, we'll get better grapes than ever. Folks will remember this summer!'

He did not know, the old man in his blue cooper's smock, how gruseomely true a word he had spoken.

The beauty of the summer assumed such prominence in so many recollections not only because it was in fact remarkable, but above all, because it came to epitomize the ironic distance between prewar innocence and wartime horror.  As Paul Fussell observed in his now-classic The Great War and Modern Memory (1975):


Every war is ironic because every war is worse than expected.  Every war constitutes an irony of situation because its means are so melodramatically disproportionate to its presumed ends.  In the Great War eight million people were destroyed because two persons, the Archduke Francis Ferdinand and his Consort, had been shot . . . .

But the Great War was more ironic than any before or since. It was a hideous embarrassment to the prevailing Meliorist myth which had dominated the public consciousness for a century.  It reversed the Idea of Progress.