The Emily Dickinson Poetry Walk, held annually on the weekend closest to the date of her death, by tradition concludes at her graveside, where there are a few formal remarks and readings from her works and a toast (seltzer rather than champagne these days, alas). Attendees are also invited to step forward and read their favorite poems.
Herewith, a few images of the afternoon's event, which drew one of the largest crowds in recent memory. 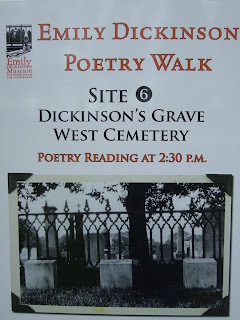 Then: the Dickinson Family plot, in an old photograph, on the sign marking the final stop on the poetry walk.
These are the original family grave monuments: matching, but cubical in form and simple. Emily's stone originally bore only her initials, "EED." Early in the twentieth century, her niece Martha Dickinson Bianchi, who came to assume the role of keeper and quasi-creator of the Dickinson poetic legacy, replaced the simpler markers with larger, upright ones, bearing sententious inscriptions (below). She created similarly uniform stones for members of the Austin Dickinson family in Wildwood Cemetery (a modern "rural" or "park" cemetery, in whose creation Austin played a major role). 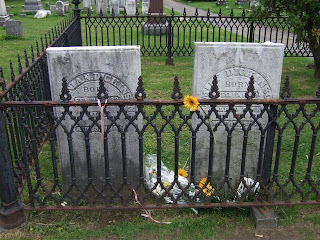 Now: the Dickinson plot today, with the gravestones that Martha Dickinson Bianchi substituted for the originals. Emily's, as is well known, bears the poetic-philosophical epitaph, "Called Back."
Tributes—a bouquet and a program—left by dancers from Amherst Ballet's production of "Emily of Amherst" on the preceding night are still present.
Restoration of the badly deteriorated and improperly repaired iron fence (see details below) is on the list of the Historical Commission's Community Preservation Act projects for the coming fiscal year. 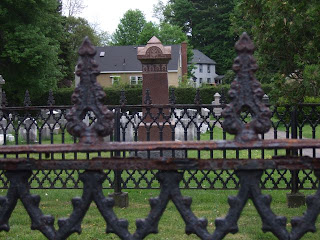 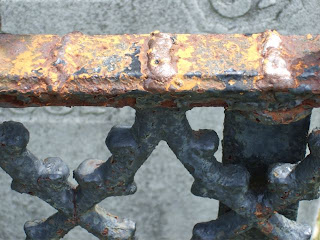 The throng arrives, via the Gaylord Gate, making its way from the 1730 Knoll (where landscape restoration is in progress) to the post-1870 section of the cemetery, in which the Dickinson plot is located. 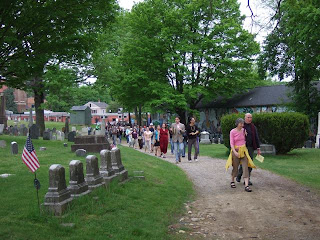 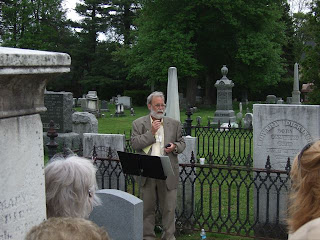 The crowd assembles. A guest offers song as well as poetry.