"Conversations With the Past: The West Cemetery Walk"

The dead rose from their graves to speak with visitors to Amherst's historic 1730 West Cemetery in one of the most successful events of the 250th anniversary celebrations.

The 250th Anniversary Historical Subcommittee, drawing upon the success of similar endeavors elsewhere, decided that one of the best ways to communicate and popularize the broad sweep of Amherst history would be to have ordinary citizens act out the roles of historical character at the sites of their graves in West Cemetery. One advantage here was that many of the figures were already portrayed on the Community History Mural by artist David Fichter (2005) and thus documented and in some sense familar. Although the Historical Commission and Town Planning Department assisted in some of the early phases of the project, all credit belongs to the Subcommittee and the citizen-volunteers. 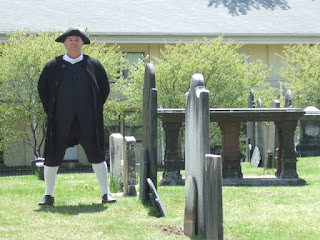 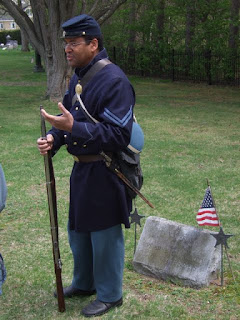 Michael Coblyn, as Sanford Jackson (1831-63), member of the Massachusetts 54th Volunteer Infantry, America's first all-Black fighting regiment, who died of wounds suffered in the assault on Fort Wagner (as depicted in the film, "Glory"). Jackson was buried near the site of the battle, but the historic African-American section of the Cemetery, where Coblyn is standing, is home to the graves of several African-American Amherst Civil War veterans, as the GAR marker next to the tombstone indicates. 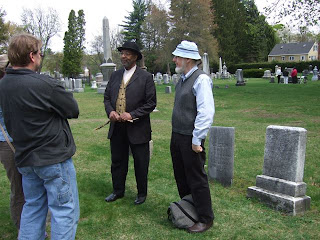 Reynolds Winslow, as teamster Henry Jackson (1817-1902), who helped to rescue Angeline Palmer
when her employers tried to sell her into slavery. 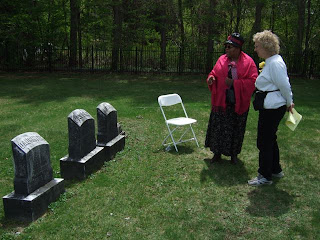 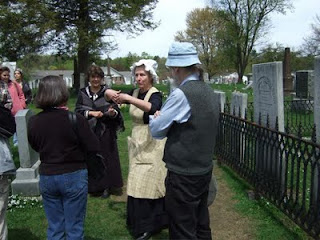 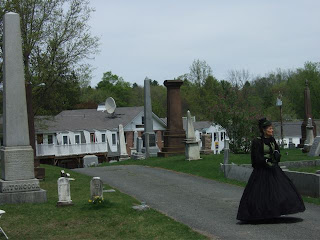 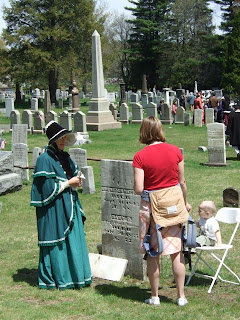 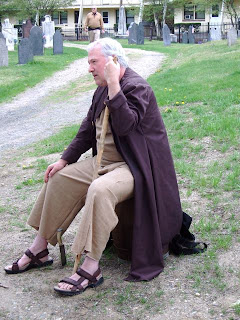 It has been an extraordinarily successful event from the perspective of both organizers and visitors. I can attest to the fact that I heard from the latter things similar to what participants in the TMCC Warrant Article Tour said when I brought them to the Cemetery to explain our Historic Preservation proposals: typically, "I've lived here 'x' number of years, and yet I've never been here," or "I had no idea about x or y," or "this really made history come alive for me."

The comments from the reenactors were equally encouraging.

Some, such as Michael Coblyn, had long been involved in similar events—in this case, Civil War reenactments, with particular reference to the Mass 54th.
By contrast, for Brenda Thomas, who played Anna Reed Goodwin, the anniversary was a first and vital opportunity to learn more about the community to which she had moved. She immersed herself in the history as she prepared for her role, and found herself being drawn ever more deeply into the details of "Ma" Goodwin as well as Amherst itself.

Visitors on the first day (on which these photographs, with the exception of that of the gravedigger, who appeared only the next day) were enthusiastic and voluble. Given both the quality and short duration of this program, many expressed the wish for a repeat performance in the fall.

• Cast and Crew with Timeline (from Amherst 250th)
• overview of characters and events: Mary Carey, "Amherst breathes life into history," Hampshire Gazette, 1 May