AMHERST - Deteriorating and broken gravestones in the town's historic West Cemetery, which regularly draws tourists from around the world as the burial site of Emily Dickinson, are being repaired in anticipation of the town's 250th anniversary next year.

Members of the Historical Commission on Monday got a firsthand look at the project, which is restoring headstones dating from the 1700s through 1900s. The work is funded through $150,000 from the Community Preservation Act account that was authorized by annual Town Meeting three years ago. 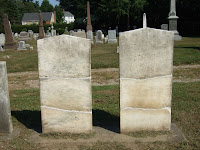 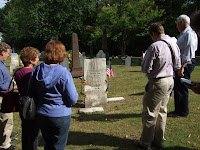 members of the Historical Commission
and associated Town Staff (Associate Planner Nate Malloy
and Planning Director Jonathan Tucker, on the right)
inspect work in progress on the headstone of Revolutionary War soldier
(later: General) Ebenezer Mattoon (1755-1843) and
his wife, Mary, after whom the local DAR chapter is named. 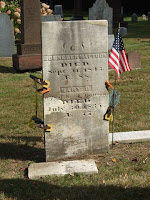 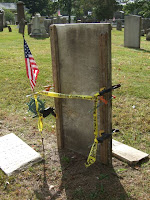 Meanwhile, the Historical Commission is looking at using a symbol from a representative gravestone that will be the graphic for signs that will formally adorn both the Triangle Street and North Pleasant Street entrances to the cemetery.

Members were closely examining the gravestone of Benjamin Kimball, which has a face at the top, with wings protruding from it, and ornamentation down the side. Member Lynda Faye said the traditional shape of this stone, along with the strong graphic, might make it ideal.

Other gravestones with similar faces and skulls might also be used in the signs.

Commission members were joined in this endeavor by students from my Hampshire College seminar, "Making Landmarks, Doing History." The goal of the seminar, undertaken in collaboration with the Historical Commission and the Massachusetts Center for the Book, is to train students to research local figures listed on the Literary Map of Massachusetts, in order to develop appropriate historical markers for sites at which they lived and worked. At the same time, the course provides a more general introduction to historic preservation, public history, the history of Amherst, and research techniques.

Having just completed a set of readings on cemetery culture, from seriation of Colonial New England gravestone art, through the rise of the "rural" or "park" cemetery movement of the nineteenth century, to current debates over the fate of the Tomb of the Unknown Soldier at Arlington National Cemetery, students were eager to make their own suggestions for the marker emblem. Interestingly, their opinions roughly mirrored those of Commission members. The famous progression of typical early gravestone motifs begins with the winged death's head, which is gradually transformed into a winged cherub's head, and eventually gives way to the urn and weeping willow. All the students recognized that the twin issues were historical and aesthetic: choosing a design that was associated with Amherst's past but would also function effectively as a graphic for a public sign. Most thought that we should take something from the early history of the cemetery (since its age was what made it so important in Amherst), but felt that the death's head might be too grim as a public symbol, and therefore inclined toward the more welcoming cherub. A few suggested, however, that we also make a point of looking for something that was unique to or particularly representative of Amherst and West Cemetery. The Commission selected three images--related to typical designs but in distinctive local variants--for further consideration and design development. 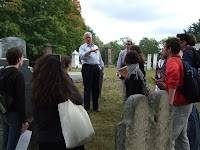 Town Planning Director Jonathan Tucker,
explaining early Amherst history to students
in my class.
As noted earlier on this blog, restoration work has been underway since this summer, and headstone repair is now in full swing. By the end of August, the conservators, Monument Conservation Collaborative, had restored 74 of the 269 endangered grave markers specified in the contract, and anticipated that, barring the unusually early onset of cold weather, they would be able to complete the work this autumn. 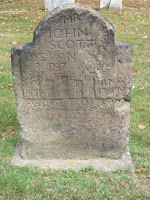 the gravestone of teacher
John Scott (1737), the oldest
marker in the cemetery 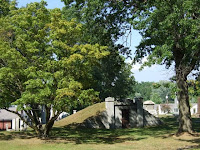 The Town Tomb, where corpses were stored in the winter, when frozen soil did not permit the digging of graves. The Town has appropriated $ 5000 from CPA funds for an engineering study of the Tomb. The North and South cemeteries have similar structures, which will also be part of the study.
The Community Preservation Act (2000) provides Massachusetts locales that adopt it with support for Open Space and Recreation, Historic Preservation, and Affordable Housing. Funds come from a progressive surcharge ranging from one to three percent, based on local property tax assessments but exempting the first $ 100,000 of assessed valuation. Participation has moreover traditionally earned communities state matching funds, derived from property transfers. Initially, all communities could earn a 100-percent match. However, as the number of participating locales has increased and property values decreased, the Commonwealth determined that, as of autumn 2008, only communities whose surcharge lay at the upper end of the scale would be eligible for matching funds. Amherst initially adopted the minimum one-percent rate, and cautiously increased the rate only to 1.5 percent in 2006. A measure on the November ballot now proposes to increase our surcharge to the maximum three percent, in order to increase amounts available from local resources and to ensure that we continue to receive matching funds. (Many of our neighboring communities, including Northampton, Hadley, and Leverett, already have three-percent surcharges in place.)
Adopting the measure in Amherst would mean an additional surcharge of only $ 55.87--or around 15 cents a day--for the average single-family house with an assessed value of $ 332,500.
Among the other vital historic preservation projects for which we have used CPA funds is the restoration of the masonry of the 1889 Richardsonian Romanesque Town Hall.
The Amherst Historical Commission supported placing the referendum on the ballot but has not yet taken an official stance on the measure, as such. A local organization called "cpaYES!" has taken the lead in advocating for the measure.