This month's artifact of the moment:

A century ago began one of the fiercest battles of a war that has come to stand for unprecedented slaughter. When the fighting on the western front during the Great War changed from the anticipated war of movement to the unexpected war of position, military leaders on both sides in vain sought a way out of the stalemate.

As 1915 drew to a close, German Chief of Staff Erich von Falkenhayn presented a plan to the Kaiser:


The strain on France has reached breaking point--though it is certainly borne with the most remarkable devotion. If we succeed in opening the eyes of her people to the fact that in a military sense they have nothing more to hope for, that breaking point would be reached and England's best sword knocked out of her hand.


A massive assault against the right target would "compel the French to throw in every man they have. If they do so the forces of France will bleed to death."

That target was the fortified area around the Verdun, a city with great symbolic resonance in French history. An ancient Roman fortress, it also lent its name to the treaty that in 843 divided the empire of Charlemagne among his successors. The fall of the fortress during the French Revolutionary Wars in 1792 had exposed Paris to the threat of capture. By contrast, in 1870, it was the last fort to fall to the Germans in the Franco-Prussian War. Despite the presence of new outlying fortifications built in the wake of that defeat, it was weakly defended in 1916: the garrison was small, and its guns had been removed for use on other fronts.

The Germans assembled overwhelming force and began "Operation Gericht" (Judgment) on 21 February with a massive assault. In the words of John Keegan:


Among the 542 heavy guns were thirteen of the 420mm and seventeen of the 305mm howitzers that had devastated the Belgian forts eighteen months earlier, and to supply them and the medium artillery a stock of two and a half million shells had been accumulated. The whole of the French defensive zone on a front of eight miles--one German division and 150 guns to each mile--was to be deluged with preparatory fire, so that 'no line is to remain unbombarded, no possibilities of supply unmolested, nowhere should the enemy feel himself safe.' Falkenhayn's plan was brutally simple. The French, forced to fight in a crucial but narrowly constricted corner of the Western Front, would be compelled to feed reinforcements into a battle of attrition where the material circumstances so favored the Germans that defeat was inevitable. If the French gave up the struggle, they would lose Verdun; if they persisted, they would lose their army.

After early German gains, the French rallied to the defense, desperately resupplying the city via what became known as the "sacred road" (Voie sacrée) and subjecting the German attackers to devastating artillery fire. The fight thus ground on for nearly a year, bleeding both armies rather than merely the defenders. Combined casualty estimates for the two sides range from around 714,000 to 936,000. Finally, in late October, the French recaptured the key fortress of Douaumount, and by mid-December, they completed the counter-offensive.


To "The heroes, known and unknown, both dead and living"

In November, the municipal council of Verdun (meeting in Paris) ordered a medal struck to honor the heroic defenders. Each 37-mm bronze medal came in a small leather pouch stamped with the name of the city and holding a certificate. 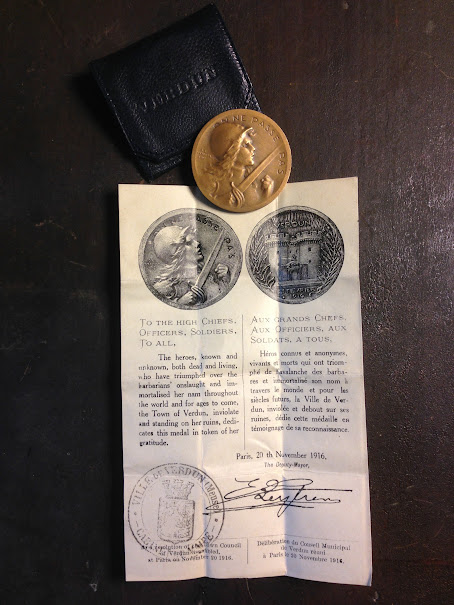 The certificate, which depicted the medal and bore the hand-stamped seal of the city, read:

TO THE HIGH CHIEFS,
OFFICERS, SOLDIERS,
TO ALL,

The heroes, known and
unknown, both dead and living,
who have triumphed over the
barbarians' onslaught and im-
mortalised her nam[e] throughout
the world and for ages to come,
the Town of Verdun, inviolate
and standing on her ruins, dedi-
cates this medal in token of her
gratitude. 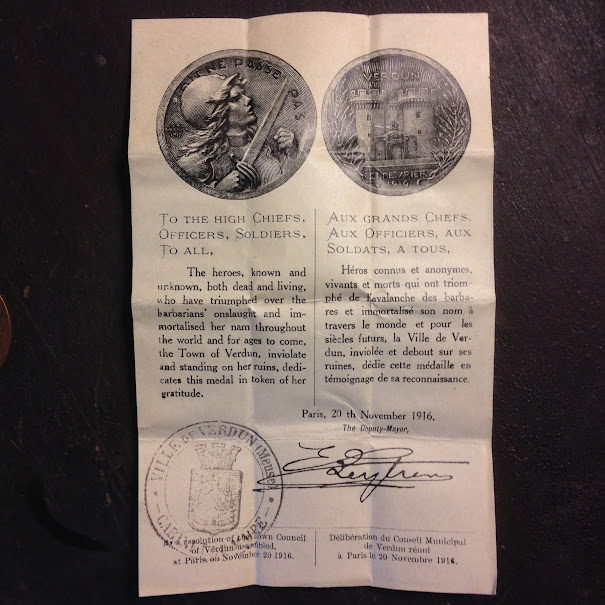 The obverse of 37-millimeter bronze medal designed by Émile Vernier (1852-1927) depicts a defiant Marianne (symbol of the Republic) wearing a military uniform and the new army helmet, one fist clenched in defiance, the other holding a sword, poised for the offensive. Around the rim is the watchword of the defenders, "They shall not pass." 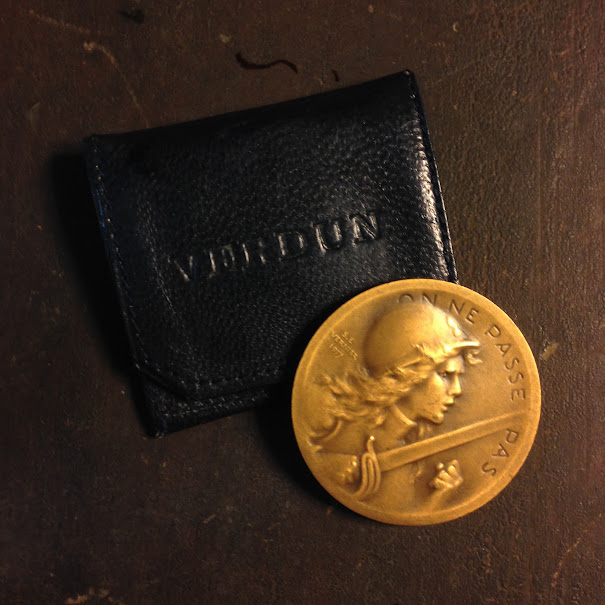 The obverse depicts the Porte Chaussée of Verdun between palms, with the word "Verdun" above and the starting date of the battle, 21 February 1916, below.

This unofficial medal was eventually issued in a variety of forms and sizes for all who had fought in the Verdun sector, broadly defined, at any point during the war.


The enemy nowhere secured any permanent advantages; nowhere could he free himself from the German pressure.  On the other hand, the losses he sustained were very severe.  They were carefully noted and compared with our own which, unhappily, were not light.

The result was that the comparison worked out at something like two and a half to one: that is to say, for two Germans put out of action five Frenchmen had to shed their blood. But deplorable as were the German sacrifices, they were certainly made in a most promising cause.

History has begged to differ. Falkenhayn had to relinquish his position as Chief of Staff, replaced by Paul von Hindenburg, the hero of Tannenberg who would go on to become President of Germany under the Weimar Republic and reluctantly appoint Hitler as Chancellor. And that is not the end of the ironies. Among the French soldiers captured in the battle was a young Charles de Gaulle. His commander was Philippe Pétain, who achieved fame for his defense of Verdun. In 1940, following the fall of Dunkirk, they briefly served together in the war cabinet before becoming archenemies, as Pétain took the reins of the collaborationist Vichy regime, while de Gaulle led the Free French from London.