Wishing a happy Hanukkah to all my readers who celebrate the holiday! 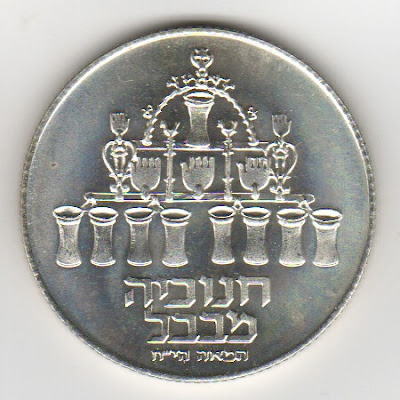 The coin, the eighth in the annual series, depicts a menorah from eighteenth-century "Babylon[ia]" (Iraq) from the Israel Museum.

The choice might at first seem surprising to Americans, accustomed as we are (because of immigration patterns and cultural assumptions) to associate Judaism almost exclusively with eastern Europe. In fact, as late as the fifteenth century, the majority of Jews lived in the Middle East and North Africa (MENA).

That situation changed as a result of improvements in social and political conditions in Europe. By 1880, fully 75 percent of world Jewry lived in eastern Europe alone, and only 8 percent in the Near East. Those 8 percent comprised some 620,000 Jews.

A century later, the picture had radically changed again. By 1992, MENA accounted for over a third of the world total. The Holocaust had murdered some 72 percent of European Jews, and immigration to Mandatory Palestine and then the new State of Israel had shifted the balance. Although we instinctively think of Holocaust survivors, that group and immigrants from MENA in fact each accounted for roughly 48 percent of the total in the first three years of statehood.

Whereas the plight of the 750,000 Palestinian refugees from the War of Independence is deservedly familiar to any educated person or reader of the news, it is less well known that some 850,000 Jews--almost the entirety of the populations from Arab lands of the Near East--were forced to emigrate since 1948. This unacknowledged, involuntary exodus has gradually been gaining attention, for example, through the work of organizations such as Justice for Jews from Arab Countries and the blog, Point of No Return: Jewish Refugees from Arab Countries. Whether it will become a factor in regional peace talks remains to be seen. Justice for Jews from Arab Countries stresses that its effort "is not a campaign against Palestinian refugees" and, rather, simply seeks to "ensure that the rights of hundreds of thousands of Jews displaced from Arab countries be similarly recognized and addressed."

The middle of the twentieth century thus witnessed the destruction of both traditional cores of the world Jewish population, and all that they had contributed to the nations in which they had lived. The depiction of the menorah on the coin was, in the words of the Israel Coins and Medals Corporation, intended as a tribute to the legacy of one of those lost cultures and its descendants:


It has been chosen as being symbolic of the spiritual strength and belief of Jews, in Arab countries, in their return to Zion and in our days of their leaving "the rivers of Babylon", from dark to light, from oppression to prosperity and from bondage to redemption in the Land of Israel.


A footnote about food:

Fun facts about food: Not just populations, but also Hanukkah culinary traditions vary from region to region. Although Americans think of latkes (potato pancakes) when they think of Hanukkah food: well, . . . think about it.

1) The origin of the festival derives from the supposed miracle of the oil. Therefore, the essence of the festival foods is not their basic substance, and rather, the fact that they are fried in: oil.

2) In any case, the potato could not have been part of that tradition because it is indigenous to the Americas, reached Europe only after the Spanish and Portuguese voyages of discovery as part of what Alfred Crosby famously called "The Columbian Exchange," and did not become popularized until much later. It is therefore a nineteenth-century addition to the menu (however welcome).

In the Near East and premodern Europe, the festival food was thus fried dough (in some cases: cheese), typically, a kind of proto-doughnut known as sufganiyot. In the Sephardic tradition: fried batter with syrup (bimuelos in Spanish: [recipe]); in modern Israel: jelly doughnuts (recipe).