Prosit Neujahr! The Imperial and Royal Austro-Hungarian Army railroad engineers wish you a Merry Christmas and a Happy New Year!

As I pondered which historical Christmas or New Year's artifact to share this year, I managed to settle on a modest one that addresses both holidays and moreover anticipates the course on twentieth-century Europe that I am teaching this spring.

It is a combined Christmas and New Year's military Field Post greeting card from the 11th Railroad Company of the Imperial and Royal (k.u.k.) Austro-Hungarian army, from 1915. An elf, using the railroad emblem as his wheelbarrow, trundles a tiny snow-covered sign denoting the Company down the track. 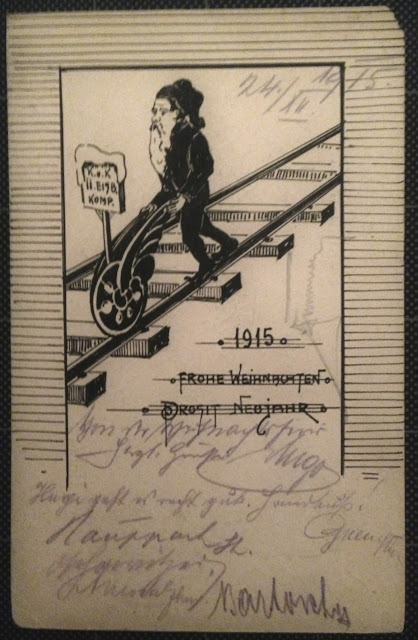 The address side depicts the leader of the chief allied state, a fiercely martial German Emperor Wilhelm II. 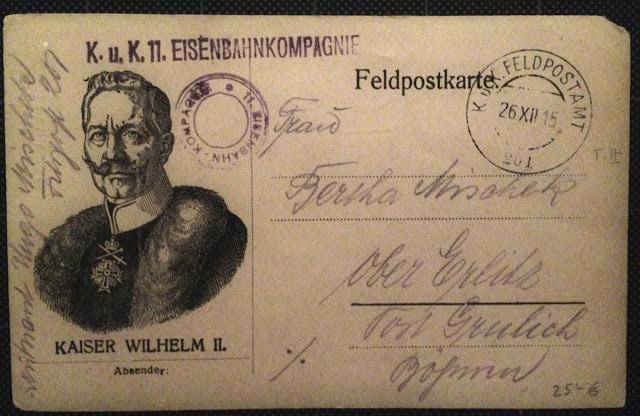 The card thus seems to differ from the typical commercial card of the era in that it has prominent graphic content on both sides. Early postcards reserved one side for the image and the other exclusively for the address. Senders therefore scribbled any message on the image side, which seems strange to modern sensibilities. After the advent of the "divided back" postcard in 1907, senders could use one side for both address and message, in the manner familiar to us (or which was familiar, until the rise of mobile electronic communication), although some of the more verbose correspondents allowed their prose to overflow onto the "picture" side.


The card, dated Christmas Eve, 1915, and postmarked 26 December, is from one Lieutenant Hugo Mischek to his wife Bertha in "Ober Erlitz," a small town (1930 population: 374) within the larger precincts of Grulich, Bohemia: today, Olomoucký Kraj in the Pardubice region of the Czech Republic. (The mixture of German personal names and Slavic family name—though in Germanized spelling—reminds us that the relation between nominal ethnic ancestry and personal identity was often complex in the multiethnic Danube Monarchy.)

The address and inscription are written in the purplish indelible pencil typical of the era: in that context, a sort of "predecessor to the ball-point pen", very useful in the field. Lt. Mischek wishes his wife "a most lovely Christmas celebration," with "warmest greetings." Immediately beneath this, a comrade adds, "Hugo is doing quite well" and the Austrian salutation, "I kiss your hand!" while other members of the unit simply add their signatures. Presumably, the men came from the same region. The intimacy suggested by the use of the first name may also be in part a matter of cultural style. The Berlin-born historian Felix Gilbert recalled being "highly astonished," "almost shocked" to hear Austrian officers, upon meeting one another for the first time, promptly slip into the informal address, "Du," which the reserved and punctilious Prussians would never countenance.

The modest artifact is noteworthy in at least two ways.

First, it reminds us that this was a new kind of war. Almost since the inception of the railroad, governments sensed its military usefulness, but it took them some time to put this insight into practical effect. The success of the Prussian army in rapidly bringing 370,00 troops to bear against the 240,000 of France in 1870 was a wake-up call. "Build no more fortresses, build railways," was the advice of General von Moltke, and other nations began to heed the lesson. By the end of the nineteenth century, the Austro-Hungarian army, which had itself fared poorly against the more mobile Prussians in 1866, had 12 Railroad Companies, a number that would soon increase.

More than any other conflict, the Great War has come to be associated with the railroad. Historians have long noted that the mobilization of the immense new mass armies raised logistics and timing to an unprecedented level of importance (a policy that reached its logical conclusion—or reductio ad absurdum—in the "launch on warning" stance during the thermonuclear doomsday scenarios of the Cold War). The late great military historian John Keegan, taking as his point of departure Wellington's observation that "In military operations, time is everything," wrote that space as well as time played a crucial role in the German and Austrian calculations involving railroads and mobilization schedules vis-à-vis Russia. And Stephen Kern devotes an entire chapter of his provocative The Culture of Time and Space 1880-1918 to "The Temporality of the July Crisis," in which both the railroad and the telegraph, as well as more psychological or metaphysical notions of "national" time play a prominent role.

Second, we are reminded that the Great War did not take place only on the Western Front, whose static "war of position" epitomized by trench warfare has come to define our image of the entire conflict. The fighting in the east, by contrast, was a traditional "war of movement," made possible in part by the bungling as much as the successes of the two sides. The city of Czernowitz, capital of the Bukovina, the easternmost district of Galicia, is said to have changed hands 15 times in the course of the war. The German forces scored great initial successes against the Russians in the north, establishing the fame of Hindenburg. To the south, the Austrians did not fare as well: by the fall of 1914, the Russians had advanced to the hinterlands of Kraków. In December, the Austrians turned the tide, and none too soon. They had lost 1,268,000 killed, wounded, or captured. A year later, at the end of 1915, the combined German and Austrian forces, supported by the Bulgarians, took Belgrade and pushed the Serbs into Albania, but none of the great powers had lost its fighting capacity, and victory was in sight on neither front. As Keegan writes, "The coming year of 1916, all parties recognised, would bring crisis on land, east and west, and at sea also. It would be a year of great battles between armies and fleets."

The elf on the postcard looks businesslike rather than particularly cheerful, for which he might be excused, given the circumstances.

A website devoted to the history of a local Austrian railway station lists a certain Hugo Mischek who was involved with railway administration in the vicinity of Olomouc (thus, the home region of the sender of this postcard) but who is then described as having been sent through retirement relocation to Vienna in 1915-15 and in retirement there, 1915-1918. This does not seem to fit the description of a Lieutenant apparently in active service, but one wonders whether there might not be some family connection. A later Hugo Mischek was a leading builder and developer in post-World War II Vienna. The full history behind our little postcard remains to be explored.