North Amherst Church Closes its Doors on 184 Years of History 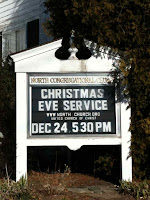 The words on the signboard at Amherst’s historic North Church gave no hint that anything was out of the ordinary: “Christmas Eve Service,” “5 30 PM.” Most of us in the neighborhood and even throughout the town by now knew better. The building was about to close, for the congregation had neither the numbers nor the dollars to sustain it. The last regular service had taken place in November, so the Christmas Eve worship would be the final one, special in several senses.

I drive by the building every day on my way to or from work or errands, but this time, I made a point of stopping to take a closer look while the sun was still shining brightly. It was one of those days of classic sharp but not cold winter light, showing off the white building with its octagonal steeple and distinctive weathervane against the blue sky to best advantage. 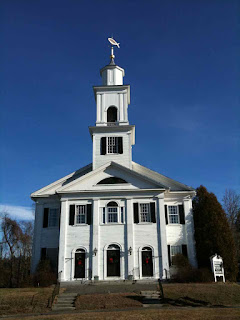 To be sure, the light also mercilessly picked out the flaws of age: the uneven surfaces of the narrow clapboards (victims of too many winters, summers, and scrapings), the rust stains descending from the lanterns on the pilasters that defined the recessed bays in which the triple arched entrance doors were set. 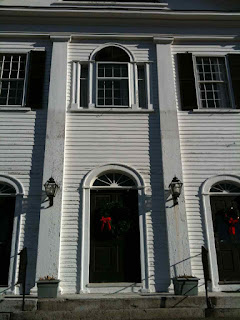 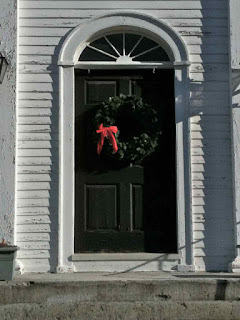 The greenish-black doors themselves looked as severely dignified as ever, but just a bit more tired and the worse for wear, the result perhaps not just of their the flaking paint, but also of the more joyous contrasting colors of wreaths and ribbons. 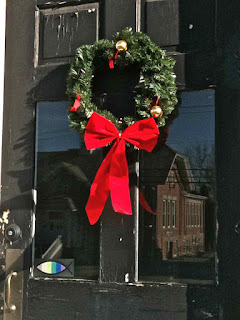 One stepped from the nocturnal cold into the gently illumined sanctuary, not knowing quite what to expect. How should the last worship service of a venerable congregation look and feel, the end of a tradition that had begun in 1826?

A few simple decorations—purple advent banners, and evergreen garlands and wreaths on the balconies, and flowers and candles at the front table— subtly adorned the classic early nineteenth-century sanctuary. A large sculptural paper Star of Bethlehem hung over the piano, which featured, along with recorders and other instruments, in the “Gathering Music” that served as a prologue to the service, proper.

“It is a pleasure to welcome so many of you whom we haven’t seen for a long time,” as well as the usual attendees, Rev. Nada Sellers began. Although she has now been working three-quarter time as an educator at the Edwards Church in Northampton, she insisted, “I still feel this is home.” “North Church is a place of radical and wonderful inclusion,” she declared, adding that she never lost an opportunity to affirm that. Just how radical the change was can be seen from the fact that Oliver Dickinson, who funded the church's construction, stipulated that a purchaser of a pew would forfeit it if he "shall let the said pew or any part thereof to any negro or mullatto or in any way admit any negro or mullatto to the possession or occupancy of the same."  He dropped that requirement in 1830.  By 1970, at the height of the controversies over the Vietnam War, the pastor resigned, saying the church had become "a captive of our culture ... supportive of the status quo and unable to speak the prophetic word of God's judgement and grace."

Asking God to become present in the midst of those assembled, Rev. Sellers began the service. It was simple in the extreme: traditional American and European hymns (including a Gospel song and a rendition of a Polish carol), brief scriptural readings from the plainspoken (some would say: prosaic) “Contemporary English Version” of the Bible. No communion. 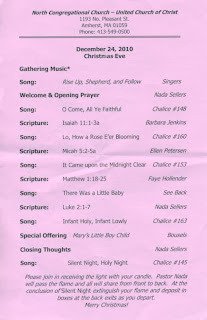 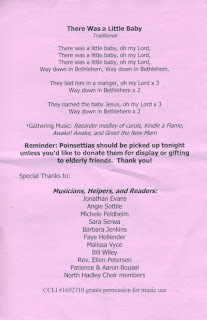 In her “Closing Thoughts,” the Rev. Sellers said, “Our season of waiting is over,” referring to the Advent season but also the fate of the congregation and its building. In case anyone missed the allusion, she explained, “For those of us for whom North Church has been home, this has been a difficult period of waiting.” As the 184-year history came to and end, she called upon those present to share their reminiscences and feelings. Two older congregants spoke of having grown up in the church. Declaring, “this church means so much to me and my family,” a woman who had been attending for 60 years explained that both her wedding and her mother’s funeral had taken place there. “It’s a wonderful, wonderful, church.” Another said, “I am just so happy to be here. . . . but I feel sad because this worship is too short.” Among the most recent members to join was a Haitian couple, who had found their way to North Church when they came to the University. They were moved not only by the welcome they had received, but also by the generosity that the congregation had shown toward their disaster-stricken homeland. Another younger member said, “I just love this church,” and several times broke down in tears.

Rev. Sellers, again drawing an implicit parallel between the congregation and the liturgical season, closed by noting that, despite the appearance of dormancy, things are active beyond our sight. It is the shortest day of the year, and yet the light will increase again. “The Christmas light is now dawning: can you see it?” The service ended, as is the custom now in many churches, with a candle-light singing of “Silent Night.” Congregants passed the flame from back to front of the rows of wooden pews, and at the close of the service, extinguished their candles as they exited. 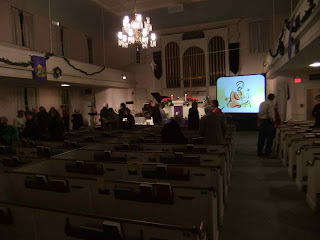 The contrast between this service and the midnight mass at Grace Episcopal Church on the Common, with its elegant vestments, its trumpet and organ, its formal choir, and its obeisance to ritual objects, could not have been greater. The latter was more impressive. The former was more affecting. Even when something was awkward or incongruous—the projection screen with the stock Christmas images, for example—it was honest and unpretentious—like the “dirty hands district” of North Amherst itself. It was hard not to be moved. 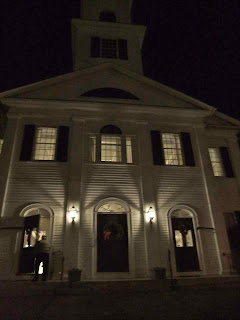 The Amherst Bulletin had written extensively about the church when the closing was announced, but only the broadcast media were represented on Christmas eve, in this case, by WWLP-22 and WGGB-40. Apparently there was some lapse in communication, for church officials and parishioners alike seemed surprised at the presence of reporters and crews with equipment and lights on the street below. 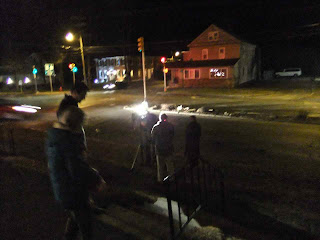 Indeed, the journalists made a beeline toward me when I arrived early. I explained that I was, alas, merely an interested neighbor and a representative of the Town, on behalf of the Historical Commission and Select Board. Although many congregants and other visitors were initially hesitant to exit through the main doors because of the waiting press, several did speak to the reporters, who found the church closing to be an engaging “human interest” story and simply wanted to be able to tell the wider public what was happening and what people were thinking.

AMHERST, Mass. (WWLP) - This Christmas Eve, members of an Amherst church gathered for the last time.

It has been a congregational church since 1828 [1826; JW], but following services on Christmas Eve the North Congregational Church's future is uncertain.

Peter Ives a retired minister told 22News, “This is a wonderful congregation that has been part of the united church of Christ for many years and a beautiful building so it's very sad but over the years the membership has gotten smaller."

With a shrinking congregation, the church on North Pleasant Street couldn't keep up. It is a heartbreaking loss for its members.

Margaret Evans said, “We came here for years with a really awesome minister and it was a great place to be and it's sad."

It could also be a loss for the entire community, unless someone steps up to buy the building and maintain it the way it is.

Jim Wald, the president [Chair; of the Amherst Historical Commission said, “This is a very important building. It's got a wonderful in tact 19th century interior wooden pews balcony and everything and we'd hate to see that lost." [sic]

While North Church is closing, there are two other United Church of Christ Congregations in Amherst.

AMHERST, Mass. (WGGB) -- It was the end of an era for one local church after being a place of worship for nearly 200 years.

Dozens came together Christmas Eve night to say goodbye to the North Congregational Church in Amherst as they attended its very last service. "It was a time of saying goodbye but also drawing close together ...it was a very beautiful service," said retired minister Peter Ives.

Members of the church have been trying to keep the church alive for the past few years but financially could not keep up with the building."So they are trying to find another owner who would treat it in a suitable way. Could be another faith community, could be shared, could go to a private purchaser," said Jim Wald.

The decision came as attendance was dwindling. The church can accommodate 400 people but lately only a few people would attend. "I think it was a feeling of inevitability. Whenever I came most of the pews were filled with elderly people and there were few of us young families, said Ann Awad.

Members of the community are hopeful that the church history and spirit will continue. "Even though they are sharing their last service tonight, this is an important area and historic building, something is going to happen that will be different and in a new form," added Ives.


Coming soon:  North Church:  the past and the future.

Horribly sad news. I remember that church well. Irreplaceable. How can this happen?

Yes, very sad. Thanks for the comment, which reminds me that I need to mention an update to follow. I've been involved in discussions between the church and town for some time. It's sad that the congregation feels the need to relinquish the building, but there is hope for both, in their separate ways. I hope to report on those developments in the near future, and will add a note to that effect.